This week on Steam: Dwarf Fortress has been in development for 20 years 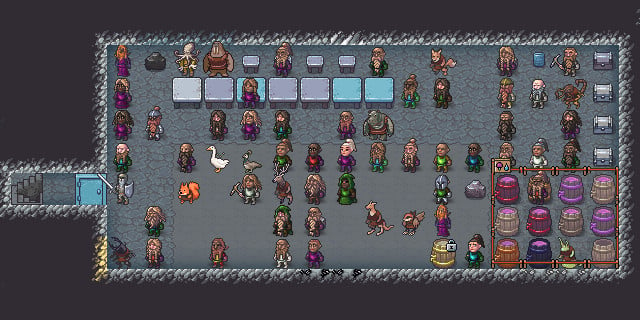 05.12.2022 at 12:41 by Rhonda Bachmann – On December 6th the time has finally come: Dwarf Fortress will appear on Steam. The game has been in development since 2002 and has been available as freeware since 2006. In 2019, an extended paid version for Steam and itch.io was announced.

The cult game Slaves to Armok: God of Blood Chapter II: Dwarf Fortress, better known by its shorter name Dwarf Fortress, is coming to Steam on December 6th. The game was created by brothers Tarn and Zach Adams, who have been working on the title since 2002. The first alpha version of the building game was released in 2006 and has enjoyed a huge, enthusiastic fan base ever since.

The simulation is already followed by 122,703 players on Steam who are eagerly awaiting the release. At the same time, the simulation sits in 14th place among the most popular titles. According to the developers, the upcoming paid version of Dwarf Fortress should not affect the already released free version of the game. However, due to the family situation and dwindling revenue from Patreon, they wanted to find another way to fund the game.

Tarn Adams called Dwarf Fortress his life’s work a few years ago. In 2011, the developer turned down a job offer from an unspecified major game developer, even turning down a $300,000 deal to license the Dwarf Fortress name. However, in recent years there have been some health problems in the family of developers. Since the game was financed by donations, money was always tight.

Dwarf Fortress has inspired games like Minecraft, RimWorld or Prison Architect. At the beginning of a game, a new game world with rocks, forests, rivers, animals and up to 1050 years of background history is generated. Players determine their game objective and manage their settlement underground or on the surface. The original Dwarf Fortress has a text graphic that has been given various tilesets by the community. The upcoming paid version, on the other hand, should appear with a correct graphic. In addition, players should be able to use the Steam workshop right after the release.

The Nintendo Switch OLED is at the lowest price just before Christmas!

Samsung: The next generation of Oled screens is all about health functions | NextPit

Past the checkout. 5 world-class football players who have not played in the World Cup

The Simpsons are turning into anime – and man does that look good!

League of Legends, Worlds 2022 final will see a historical record beaten by Faker or Deft