Google compiled the traditional annual summaries of the year and published a ranking of the most popular searches in Ukraine, which fully shows search trends in Google Ukraine in 2022. In general, this is what Ukrainians were most interested in this year. The list includes — “Map of air alarms”, “Arestovych”, “Zhyrinovsky”, “Gostomel”, “Swift”, “Land lease”, “Blackout” and others.

In fact, Google has compiled several local rankings for Ukraine — in addition to the general top “Most Popular Queries” there are seven additional charts under separate headings: “Person”, “Gone Forever”, “Ukrainian Geography in Search”, “Purchase”, “Question: “What such?”, “Film” and “Series”.

So, the most popular query of 2022 is “Air Alarm Map”. This is quite expected, given that such a terrorist country as Russia still exists. The second most popular request is also not at all surprising – “News of Ukraine”. In third place is “yeDopomoga”. The top ten also included queries such as “Map of Ukraine” (no, this is not a mistake, this is how most Ukrainians “Googled” the map of Ukraine), “Bayraktar” and the new season of the TV show “Bachelor”. A significant part of the most popular requests of the year is related to famous personalities. The greatest increase in the interest of Ukrainians among searches in the “Person” category over the year was received by former adviser to the Office of the President Oleksiy Arestovych, who was distinguished by several high-profile scandals and “expert” assessments, thanks to which a large number of memes arose. Ukrainians were also interested in the urban legend the Ghost of Kyiv, the Commander-in-Chief of the Armed Forces of Ukraine Valery Zaluzhny, the former Prime Minister of Great Britain Boris Johnson and the head of Mykolaiv Regional State Administration Vitaly Kim. Regarding the people who left forever in 2022, the most requests were about Volodymyr Zhirynovskyi, Ruslana Pysanka, Yuriy Shatunov and Queen Elizabeth II. In the “Movies” category in 2022, Ukrainians were most interested in Marvel’s blockbuster “Spider-Man: No Way Home”, and “House of the Dragon” – the sensational prequel to the series “Game of Thrones” – became the leader among television series. The teenage drama “Euphoria”, the Turkish TV series “Hear Me”, the new season also made it to the top Russian series “Major”, the continuation of the series “Sharp Cartouches” and “Strange Miracles”, and last year’s leader – the South Korean survival drama “Squid Game”. In the category “Ukrainian Geography in Search” this year, Gostomel, Bucha and Mariupol showed the greatest growth; the Ukrainians were also looking for Chornobayivka, Kherson and Zmiiny Island. A generator became the “Purchase of the Year” in Ukraine; in addition, Ukrainians were interested in where to buy salt, bulletproof vest, “Russian ship” brand, as well as candles, Poverbank and Starlink. In 2022, Ukrainian users were looking for an answer to the question of what swift, lend lease and state of emergency are. And also – they tried to find out what palyanitsa, bayraktar and blackout are.

The complete list of requests of 2022, the popularity of which has grown the most in Ukraine for
year, looks like this (in the “Most popular requests” category, requests are listed in language
of the original): 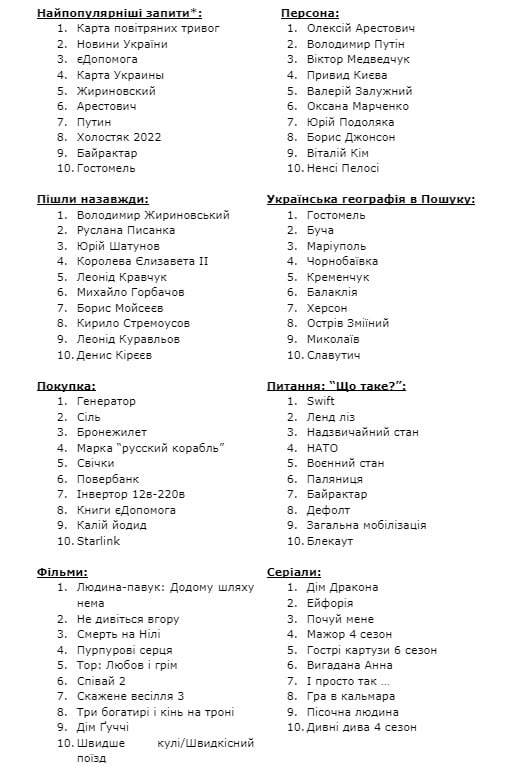 Steam: discounts on the best games nominated for The Game Awards in the new sales

PSG to extend contract with Verratti