Conan Exiles receives its first major update since the change that came with Age of Sorcery, filling the game’s vast and harsh wilderness with even more activities and dangers. The free update coincides with a plethora of new cosmetic items that can be purchased through the new Battle Pass or in the Item Shop. 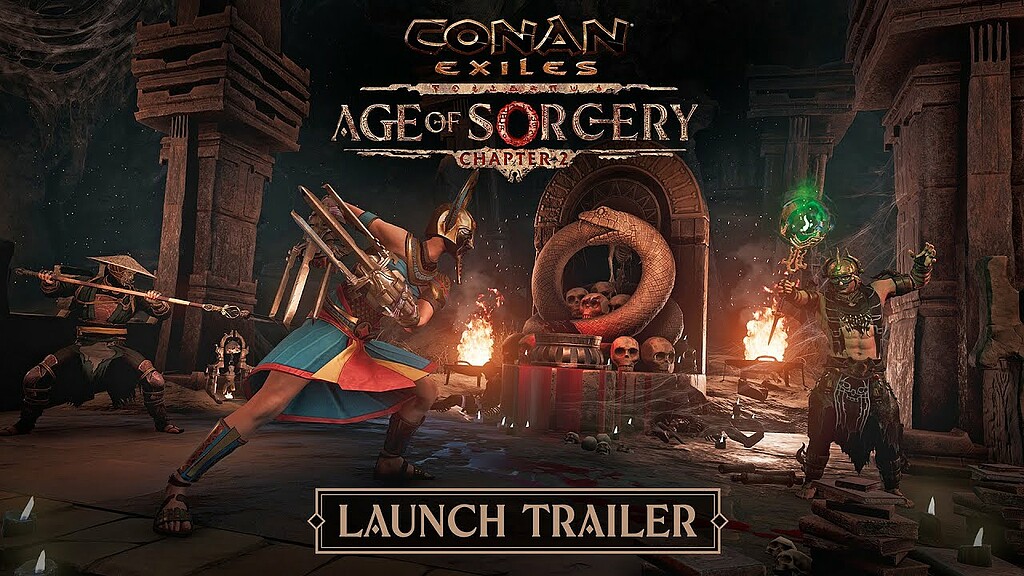 Funcom has also announced three new batches of Twitch Drops. Running from today through January 3rd, these will allow players to purchase two wall ornaments and the beautiful, festive lapdog pet simply by watching Conan Exiles streams on Twitch. Players simply need to connect their account to Twitch via a button in the game menu to get started.

The arrival of sorcery has rocked the foundations of the Exiled Lands. Strange rituals are being performed everywhere as the sorcerers toss around with their newfound power. In Chapter 2, players will encounter Khitan bounty hunter camps in both the Exiled Lands and the island of Siptah. To understand the newfound magic art, they task players with hunting down and bringing wizard NPCs to them. Although the skull is sufficient, living bodies offer much higher rewards, including a new armor set.

Along the way, players will also encounter the new Witch Hunt challenge, where they can interrupt the powerful rituals of one of four different boss wizards. These wizards cannot be captured alive, but their skulls can be used in the be brought to the Khitan camp.

Alongside the free update, a huge range of new paid cosmetics are available in the Item Shop and in the new Battle Pass, including the expanded Storm Glass building set, new armor and weapons, new pets, unique decorations and more.

Sims 4 wants you to spend more time with your kids