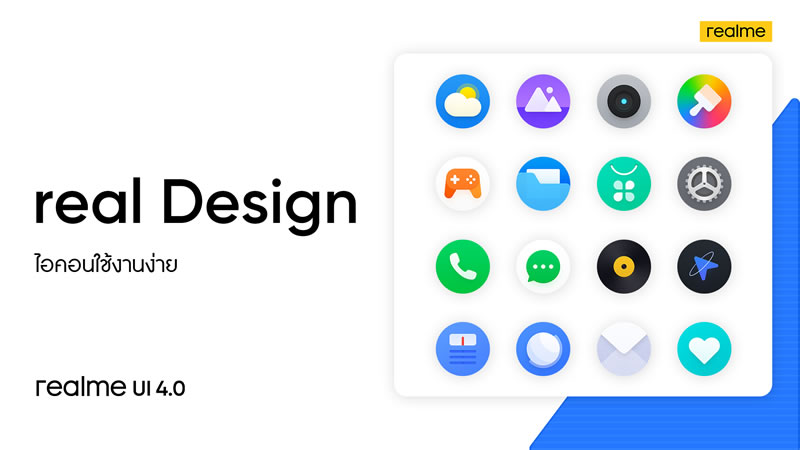 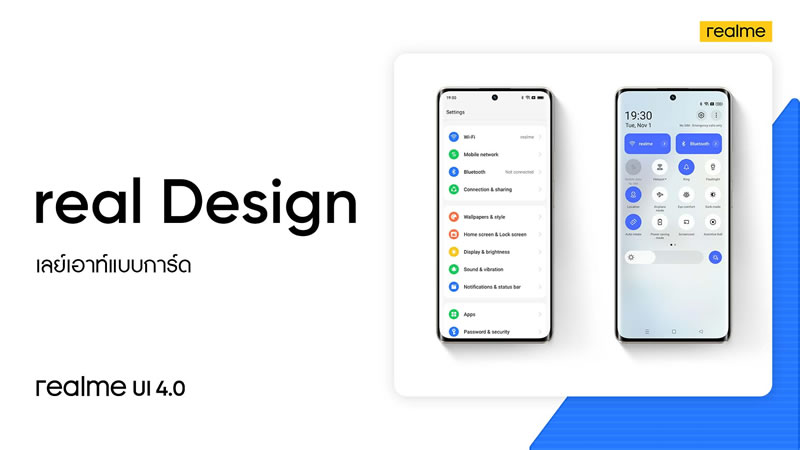 Be dazzled by the design and effects.

User interactions with apps In day-to-day use, realme UI 4.0 redesigns the icon pack to let users know what app it is at first glance. By designing a card icon layout. Consolidate the different parts of the dataset and redesign the panel onto these “cards.”

Users can also customize the control panel on the card to quickly retrieve the information they need. realme UI 4.0 also has a beautiful floral wallpaper and cool mirror clock, giving the interface a beautiful movement. 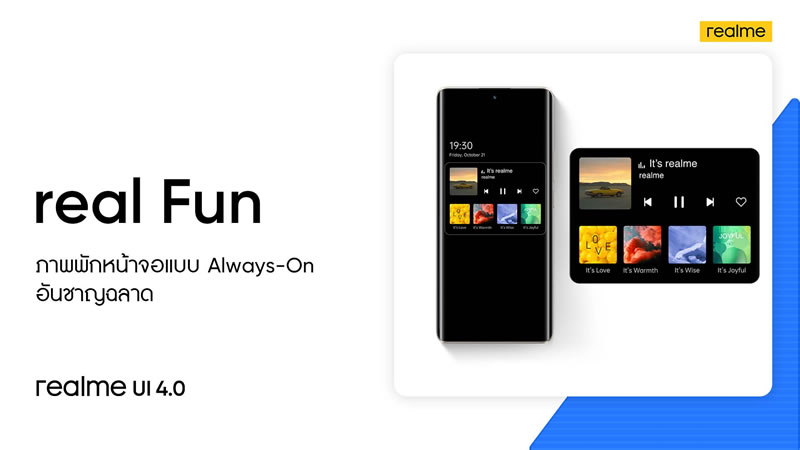 A new style of interaction that everyone uses will wow.

realme UI 4.0 introduces an intelligent interaction style that enhances usability and creates a more personalized experience. With new features in the Always-on Display (AOD), such as Smart Music AOD, while listening to your favorite music in Sportify, you can see the music player without unlocking the screen and recommend 4 playlists that you might like. from the processing of the algorithm And when you double-click on the AOD, the music player automatically switches to an interactive control panel. You can press play, pause or play the next song immediately.

realme UI 4.0 also uses the new Bitmoji, which allows you to customize AOD emoji animations in more ways. It also displays information about specific usage or status. in the real world for users to enjoy AOD even more. 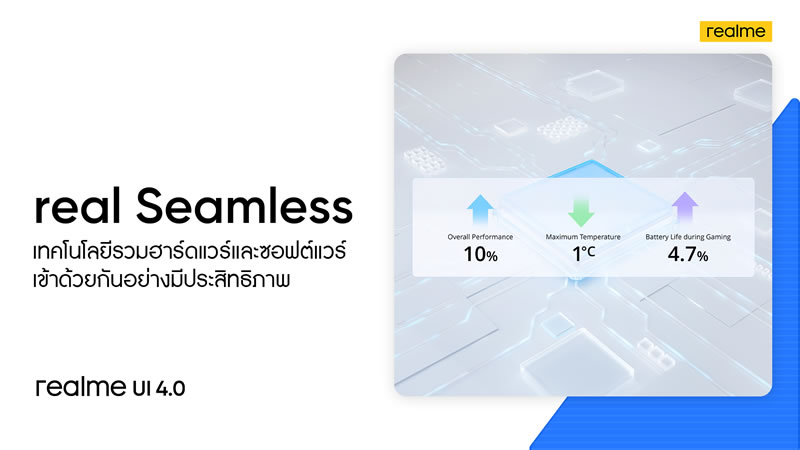 Firmware for an active lifestyle

The basic system functions in realme UI 4.0 have also been upgraded with a new powerful Dynamic Computing Engine that improves overall performance while reducing system power consumption. Allowing users to enjoy their smartphones for a long time with a smooth and seamless experience. The test results indicate that realme UI 4.0 is 10% more efficient and improves battery life during games by 4.7%.

In addition to performance, realme also upgrades animation with the latest upgraded Quantum Animation Engine 4.0 to create the ultimate experience as you scroll or switch applications. Home also offers an easy navigation where users can access the apps they need in one step from a large folder directly on the home screen.

realme has also improved the adaptive layout with new features such as Waterfall Content Self-adaption, One-side Navigation Bar and Adaptive Controls to create a stable, beautiful user interface and make full use of the screen space. 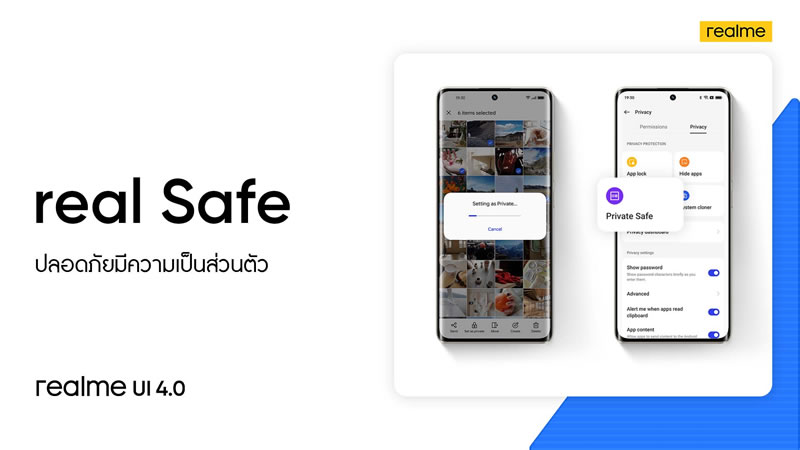 Today, many users are still concerned about the security of their confidential documents and private pictures. realme UI 4.0 comes with Private Safe, a brand-new security tool built on the Advanced Encryption Standard (AES) to provide complete privacy protection. excellent personal

In addition, realme UI 4.0 has also developed a new Auto Pixelate feature that allows users to automatically blur personal information easily. With just one click when you take a screenshot with your frequently used messaging apps like Whatsapp and Messenger, frees you from worrying about accidentally exposing your private information. 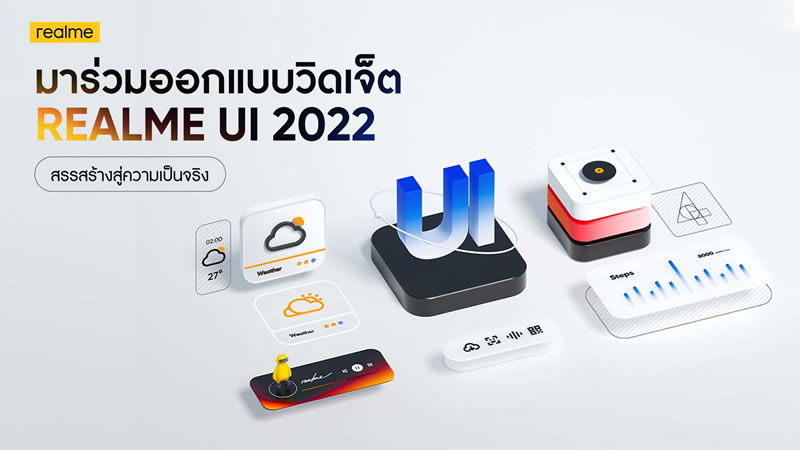 Ahead of the official launch of realme UI 4.0, the realme brand has organized the 2022 realme Widget UI Co-creation Project, inviting fans and UI designers around the world to design a new interactive style of realme UI 4.0. which has more than 1,500 applicants from 15 countries

Shortlisted ideas will be announced on launch day. realme 10 Pro series Which will be held on December 8th. In addition, the realme UI team will collaborate with the owner of the design and include new widgets in realme UI 4.0 for users around the world to experience cool ideas through information updates. Inside the machine (OTA) this time

Vinicius JUNIOR: "I hope we can dance to the final"

Amazon has started production of a film based on ToeJam & Earl

Space Wreck, a hardcore role-playing game with optional combat, was released on Steam - the developers were inspired by the first Fallout