A number of mental illnesses and age-related changes cause working memory deterioration in people. Scientists are looking for ways to simply stimulate the brain to save patients from such phenomena. For example, methods of electrical and electromagnetic stimulation of the right hemisphere have already been proposed, the effect of which lasts up to one month. A new study promises to improve short-term memory with a laser simply by shining it into the right area of ​​the brain through the skull. 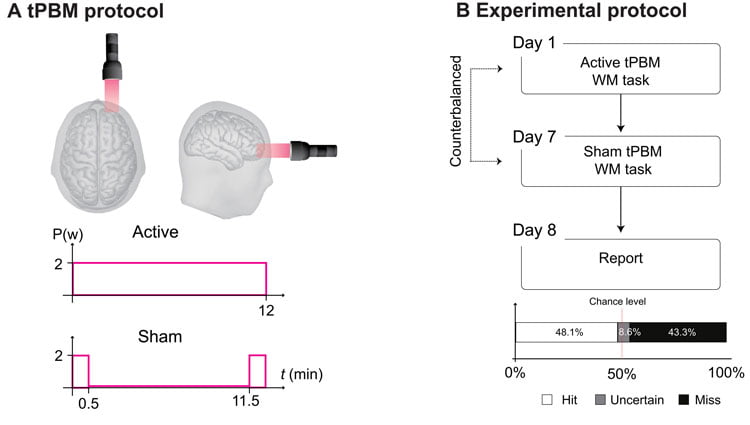 Scientists from the UK, China and the US conducted a series of studies on 90 students, during which they convincingly proved the possibility of non-invasive (without surgical intervention) laser brain stimulation, which they described in detail in the journal Science Advances.

During the experiment, students had to remember and later reproduce either the colors of the objects or their orientation in space. As it turned out, mindfulness unequivocally increased by about 10% in only one case – when a laser with a wavelength of 1064 nm was shone on the right prefrontal cortex. This result raises hope that in the future there may be tools for a simple and non-surgical operation to improve short-term memory.

However, this is still a long way off. So far, scientists do not understand the mechanism of the brain’s reaction. This can be both an improvement in the supply of oxygen to brain cells, and stimulation of mitochondria, which, in turn, increase the release of ATP molecules into the brain and saturate neurons with energy. In any case, the proposed method has no consequences for the health of the brain and humans (although if this is an overuse of ATP, then this is still a question).

At the next stage of research, scientists intend to see how long the effect of laser memory stimulation lasts. If the effect is long-term, then it will be possible to work on its inclusion in clinical practice.

(Special) A day in the life of an electric car driver!

Tens of thousands of dollars and gifts: Amouranth fans spoil the streamer

The Callisto Protocol on PS4 and Xbox One: Digital Foundry video analysis on “old gen”

The developers of Euro Truck Simulator 2 tease a new addition