Considering that the developers actually wanted to get away from the grind with WoW: Dragonflight, there is a surprising amount of content in which our heroes are currently grinding stupid reputations or collecting fame levels. But the big difference to Shadowlands is that it’s much more optional. The course of the main story is just as little hidden behind such fame levels as indispensable improvements for your character.

However, there are things here and there that are so important that many players want them quickly (and especially before the raid starts). One of the most popular factions is the Valdrakken Accord with its two black dragons: Wrathion and Sabellian. There are some good rewards here that a lot of players are currently throwing away their good intentions and grinding as hard as they can.

Today’s balance hotfixes for WoW: Dragonflight should bring order to a week after release. Is that lucky too?

WoW: Profession specializations – lots of knowledge through treasures and NPCs

If you want to perfect your profession in WoW: Dragonflight, you need a lot of professional knowledge. There’s Plenty for Free – Gathering Crafting Knowledge Guide!

The two black dragons, where you have to choose between the two in many cases, reward you with a lot of cosmetic things. But there are also a few relevant boosts for your character. Examples of rewards include: 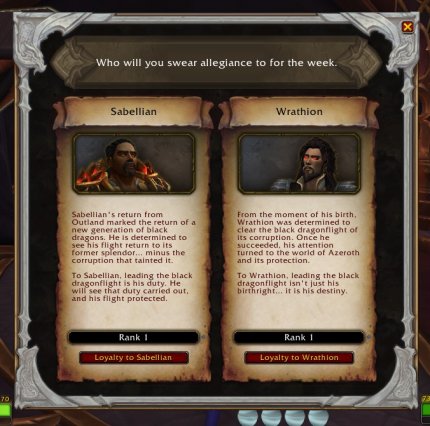 Each week you have to distinguish between Sabbelian and Wrathion. Source: icy-veins That’s enough for many players to grind properly. The best way to do this so far has been mindlessly farming enemies to get as many key shapes and key fragments as possible. These in turn can be combined into a Restored Obsidian Key and turned in in the repeatable quest Revealing Our Past. As a reward there is a chunk of reputation for the respective dragon, the Valdrakken Agreement and a small chest with gold.

The quickest way to gather many of the keys was to craft two groups of four and use them to rampage through the vaults beneath the Obsidian Citadel. Since there were only four players in a group, both groups could tag an opponent and receive loot.

With a total of eight well-equipped players, the grinders were able to show such a high tempo that the internal systems had switched to hyperspawn. This is usually only used when there are a lot of players in an area (e.g. for the release of an expansion). Then the enemies spawn so quickly that there are no waiting times.

In the case of the grinders, this was of course extremely practical. Instead of running around a lot, they constantly had several opponents to attack. But that’s over now. Because the developers at Blizzard have adjusted the spawn and significantly reduced it. In the following short clip you can even see how the amount of mobs is reduced live.

This changes little for the type of grind. However, it will now take much longer, since the paths between the opponents take longer. So it might even become more interesting to buy one’s reputation at a high price. Turning in Signet of Sargha (Wrathion) and Mark of Sargha (Sabellian) will also give you some Reputation. These items are not soul-bound and are therefore traded for sometimes horrendous sums in the auction house.

Diablo 4 at The Game Awards? Blizzard warns The Rock, 'Lilith is coming'!

GTA 6: A trailer in preparation, soon a release date? The news