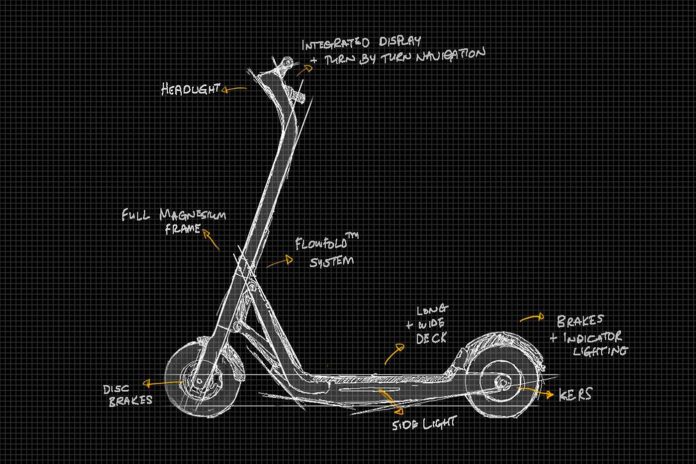 McLaren has launched its first electric scooter through subsidiary brand Lavoie. The Lavoie Series 1 brings an unprecedented portable design with a long autonomy.

It is certainly not just brands like Xiaomi and Segway that are developing e-scooters. McLaren is also busy with it through its electric subdivision, McLaren Applied. The development arm of the British car manufacturer launched the Lavoie Series 1 e-scooter at the beginning of this week. A new sub-brand was also launched for this – at least for the moment: Lavoie. What makes the scooter unique is that it can be folded very easily for transport.

McLaren equipped the scooter with its patented one-touch Flowfold system. This allows the electric scooter to be completely folded with just one lever. As usual, only the handlebar of the e-scooter folds up. It is striking that the steering wheel folds down in three parts; this means that the folded scooter takes up less space than with a conventional mechanism that folds as a whole.

Its compact size makes the e-step particularly easy to transport. This is helped by the magnesium frame, which means that the electric scooter weighs about 16.5 kilograms. Thanks to this low weight, Lavoies Series 1 electric scooter has a range of about 50 kilometers on a full battery. According to the car manufacturer, recharging takes about 2 hours via the supplied charger.

According to the manufacturer, drivers of the Lavoie Series 1 should also feel completely safe when they go on the road with the scooter. It naturally received lighting at the front and rear, as well as lighting at the front of the rear bumper to illuminate the driver. All in all, the driver must therefore imagine himself in a true light show and not be overlooked by other road users.

McLaren said it developed the e-scooter from the perspective with which it builds cars. This should lead to extreme durability and a safe and stable feeling on the road. Whether we will also be able to enjoy these aspects remains to be seen for the time being. McLaren did not yet share details about the availability of the electric scooter at this point. Prices also remained unaffected.

Black Friday LG C2: The queen of 4K OLED TVs is at an excellent price!