Reaction Charged deals increased damage (+100-250%; increased boost level by completed Robbery trials). It also increases the recovery speed of the elemental explosion (-1 second and +4 energy every 3 seconds when activating the Charged reaction). To receive challenge rewards, you need to complete it and activate the Charged reaction 20 times. 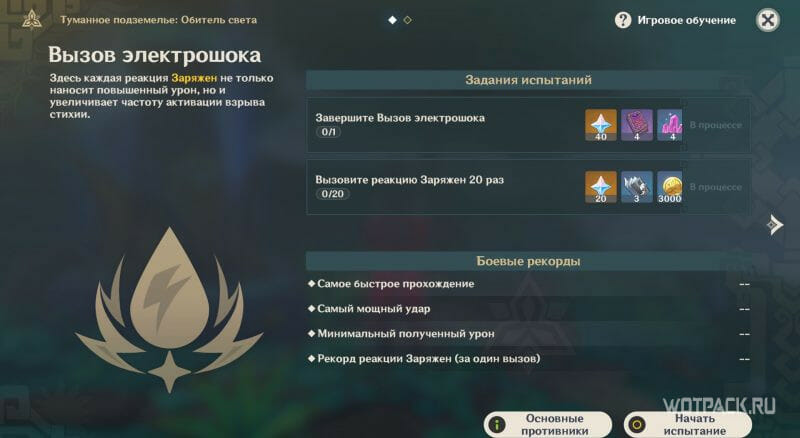 There should definitely be Hydro and Electro characters in the squad, since there are no pronounced owners of these elements among the opponents. 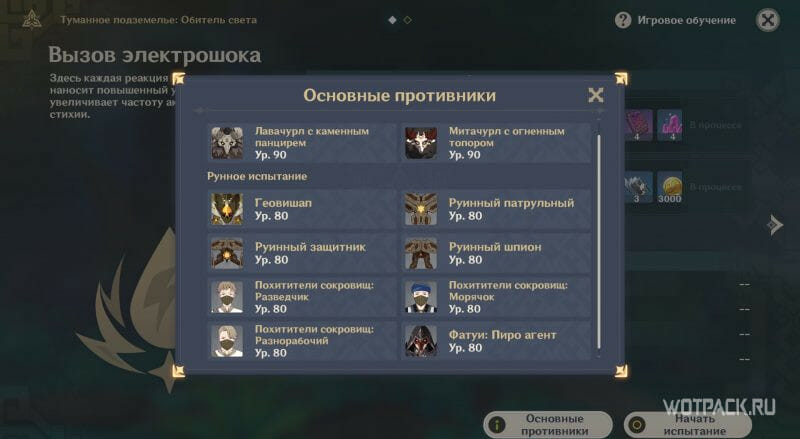 When activating the runes and in the corridors of the dungeon, you will have to deal with the following enemies:

In the final test: 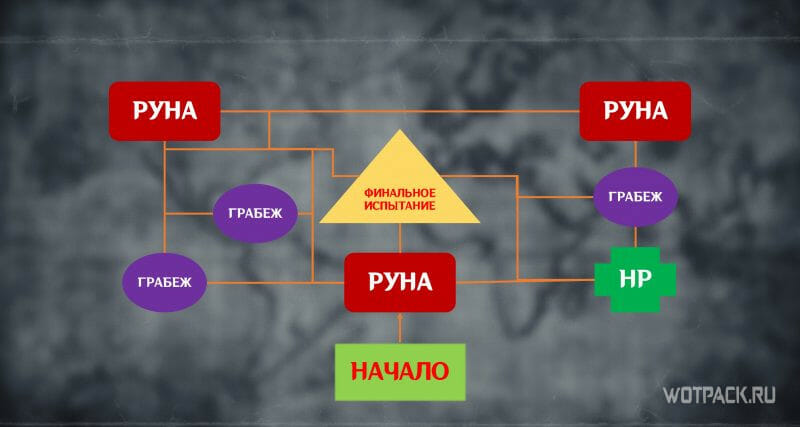 The main reaction is freezing. Her damage can be increased by 60-120% depending on the number of Robbery challenges completed. 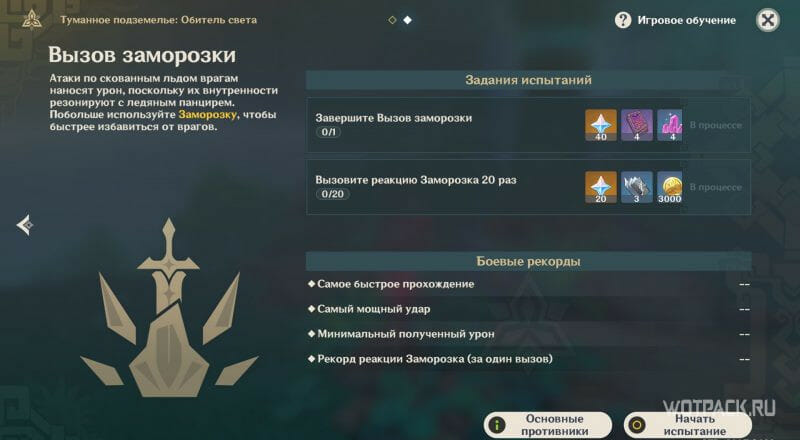 The main part of the opponents are Hydro Slimes, Mimics, Fatui, Shamachurls and Abyss Mages. In the final challenge, you will have to fight the Void Reader: Purple Lightning and the Hydro Mages of the Void. 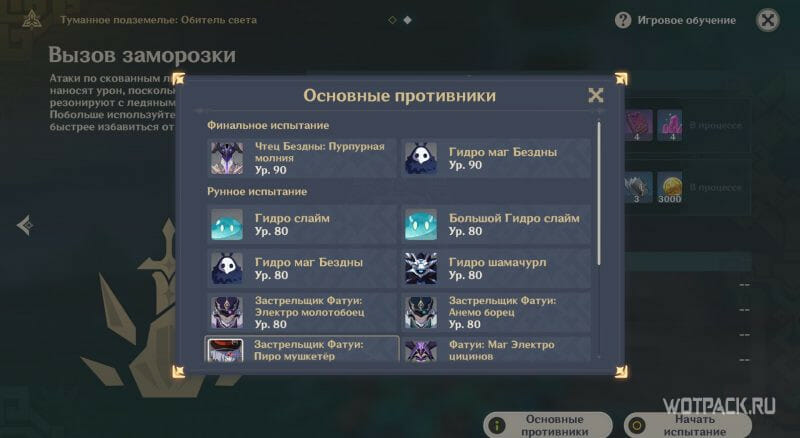 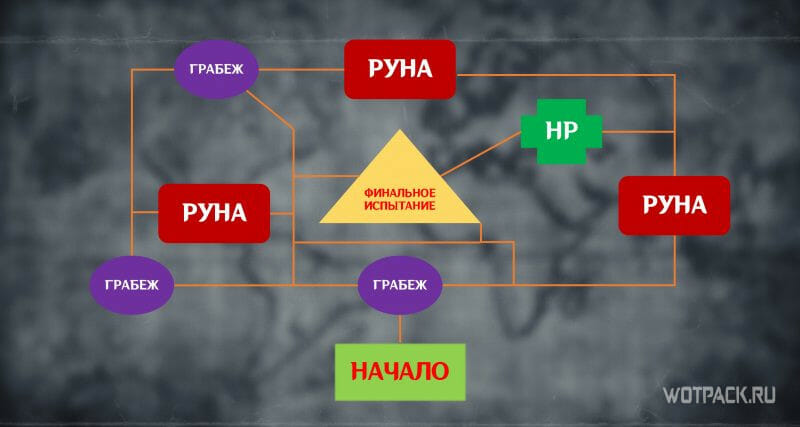 When Dispel is activated, all members of the squad receive a boost. Each completed Robbery challenge will increase this effect from 100% to 135/170/205%, respectively. The buff lasts for 8 seconds. 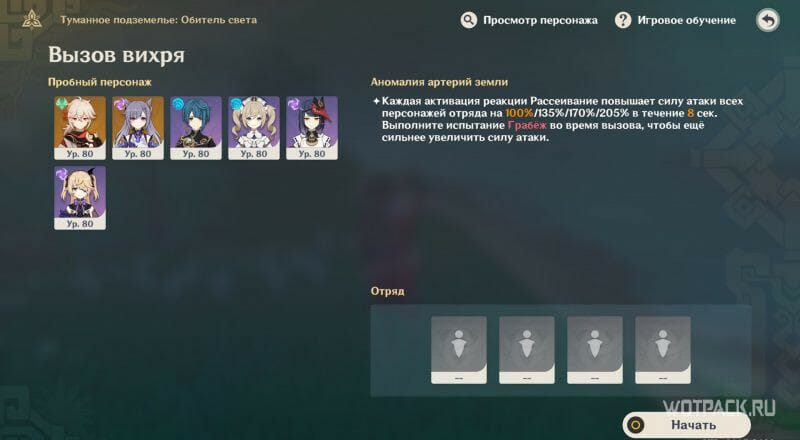 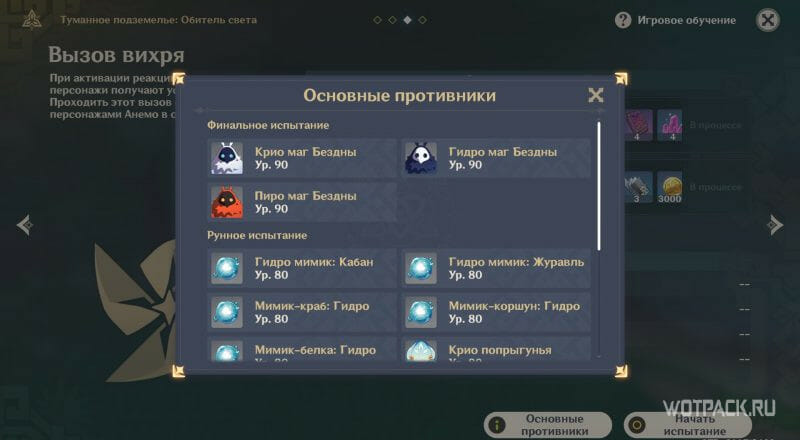 Actually, it is possible to absorb the statuses of enemies with Kazuha, but the choice of temporary heroes seems to be quite effective. 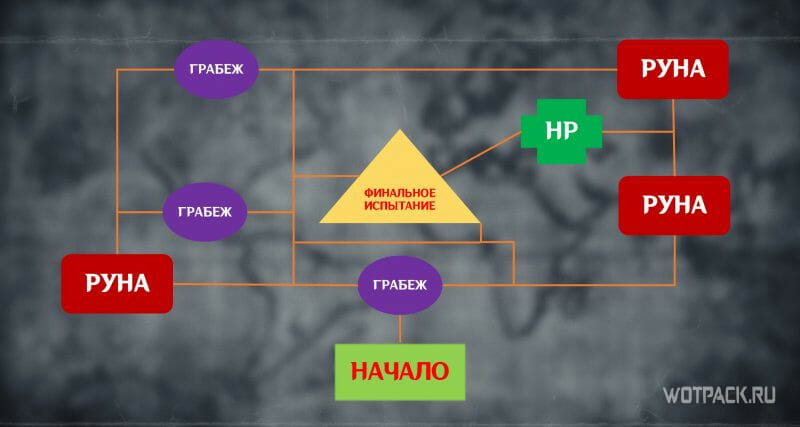 Strengthening is aimed at explosions of the elements of the squad members. Each hero’s ult will receive a 15/20/25/30% boost after each use of this skill by any hero. The amount of damage boost depends on the number of Plunder challenges completed. The effect stacks up to 10 times and lasts until the end of the trial. When the unit reaches the maximum number of stacks, the heroes’ normal attack speed is increased by 20%, and the movement speed is increased by 10%. 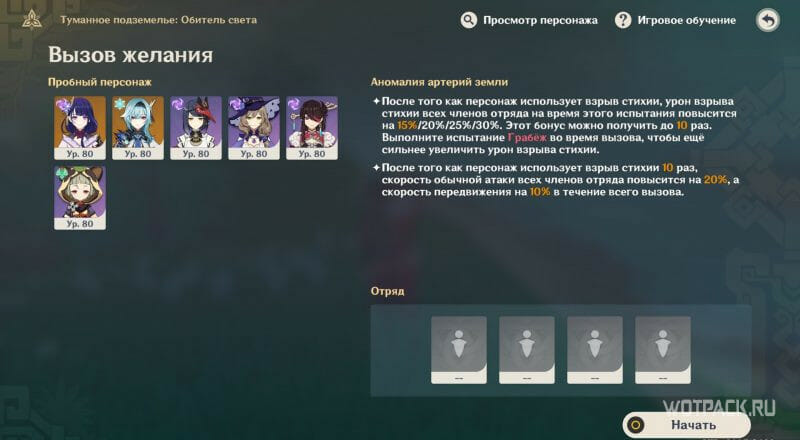 Among the enemies you can meet treasure thieves, hilichurls and mitachurls, agents and magicians of Fatui, and in the final test you will have to fight with two Kairagi.

Remember that one of the samurai, if you do not kill the second for a long time, can restore HP during the battle. 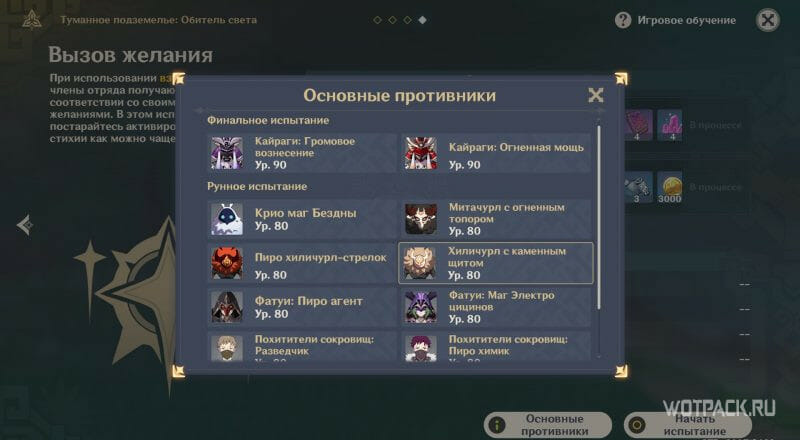 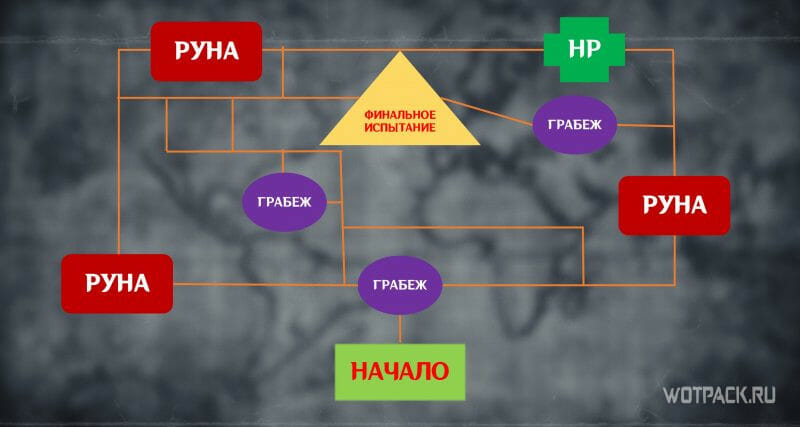 As part of this challenge, the elemental reactions Vapor and Melt are intensified. Every 3 seconds, activating these reactions will create a large shockwave. Increases AoE damage by completing Robbery challenges in the dungeon.

The main opponents to face in such conditions are Hilichurls, Mitachurls, Void Mages, Pyro, Cryo and Hydro slimes, as well as various Fatui. At the final stage, you need to defeat a detachment of ruin mechanisms.

This time you can collect units for every taste. 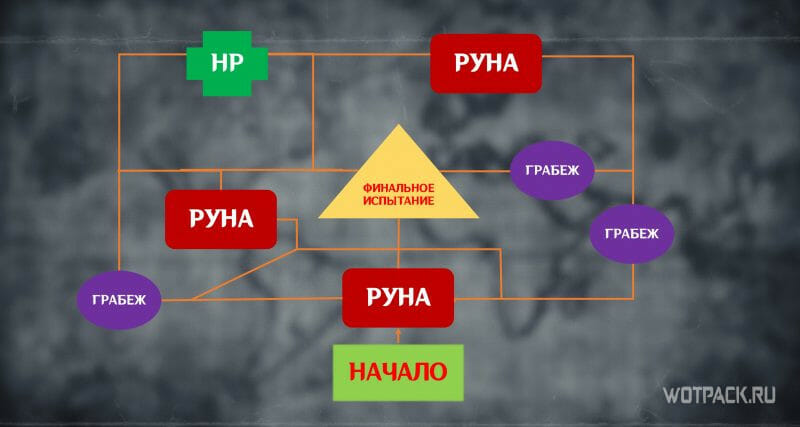 At this stage, the Superconductor, Overload, Dissipation and Crystal reactions are enhanced. When invoking the listed reactions, the hero receives an elemental damage bonus depending on the element that triggered the process. Each new bonus has its own timer. The effect stacks up to 4 times. Damage is increased by 24/36/48/60% respectively for 8 seconds. To open the maximum level of the bonus, you must complete Robbery tests. When a new level stacks with an existing level, the effect time is reset to 8 seconds.

You will have to fight with Electro mages of the Abyss, shamachurls, shooters of hilichurls, Hydro and Geo ghosts, baby geowishaps, Geo and Electro slimes. At the final stage, Lavachurl will appear with a thunder helmet, assisted by Electro shamachurl and Cryo hilichurl shooter. 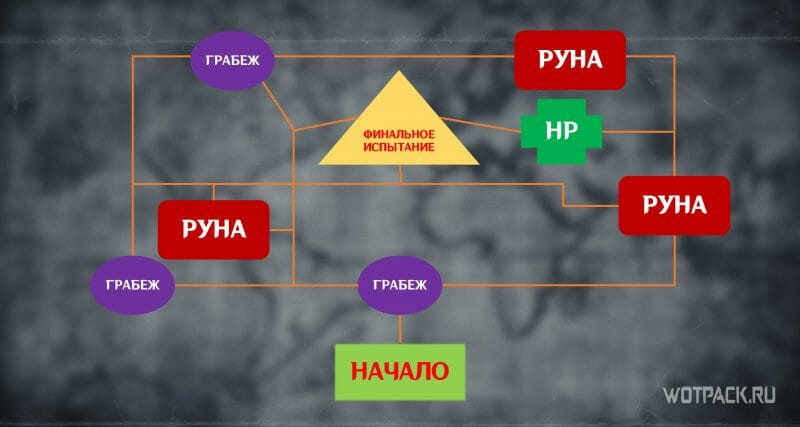 No additional land arteries. Just a good old fight. When passing the runes, the main dungeon enemies will be the hounds and puppies of the gap, the Mirror Maiden of Fatui and the Pyro agent, as well as the Pyro and Electro Mages of the Abyss. The final stage is the most difficult in the passage, since several numerous squads of hilichurls, slimes, magicians of the Abyss, mitachuurls, as well as lavachurl with a thunder helmet and Crio shamachurl will act against the hero at once.

The biggest challenge will be assembling a universal unit that will pass such a test. When compiling, we focus specifically on the final battle, in which most of the elemental versions of opponents are represented.

The advantage when composing a squad is that it can be assembled from all characters. available at previous stages of the event. It should definitely be a multi-element squad with at least one heal, which compensates for the loss of HP from the effect of Corrosion.

In general, this is only a small part of the builds that you can try at the final stage of the event. Play according to your preferences and desires, if some heroes have not yet been received on a permanent basis. Do not forget about recommendations regarding the ratio of elements and the use of healers. 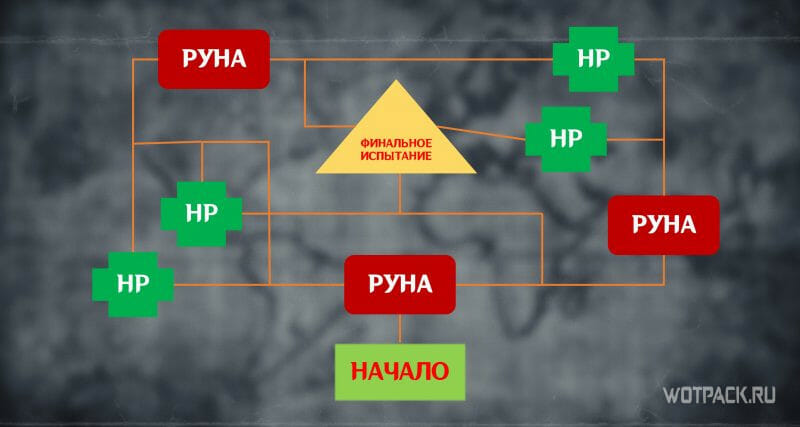 Minecraft recreated The Legend of Zelda with Link helmet

Autumn is here: our tips for taking a good photo with your smartphone