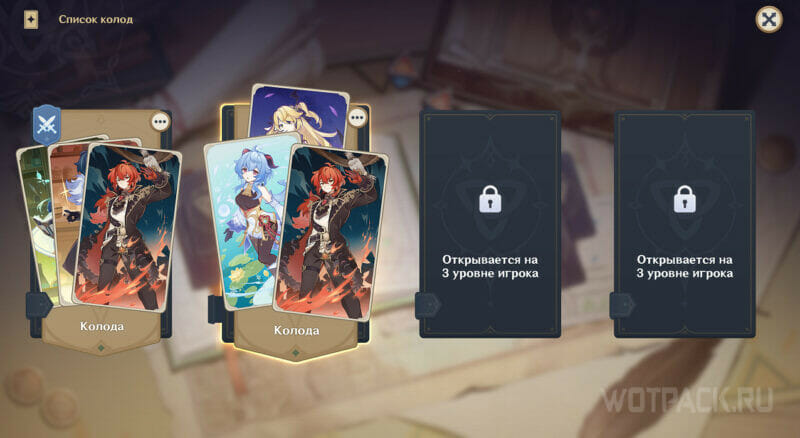 The Sacred Summon of the Seven deck in Genshin Impact is an essential part of the collectible card game. To successfully compile an assembly, it is worth focusing on the characters, their combination, and from this build the further display of support cards, events and equipment.

In this guide, we will go into detail about best decks for Holy Call of the Sevenexplain their features and how to play them. 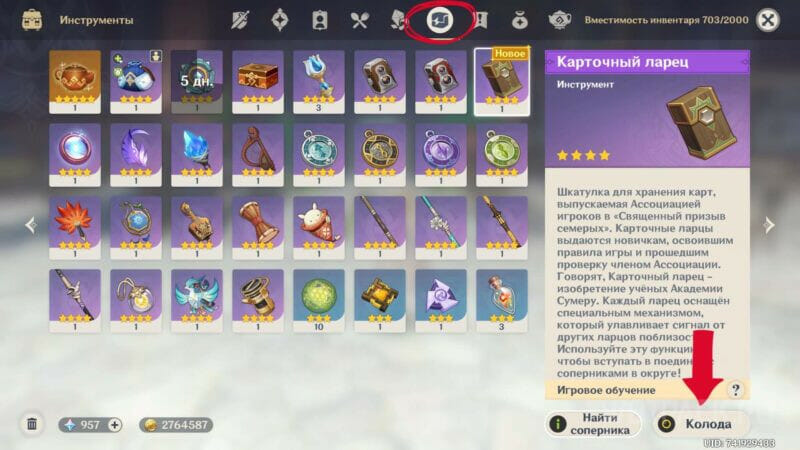 The Traveler gets the opportunity to view, create or edit any deck only during the completion of the quest “Come play the Holy Call of the Seven!”. Margarita, the owner of the Cat’s Tail tavern, which is the main location for all the mechanics of card games, will give the new player a special tool – the Card Box, which will store all the cards found.

You can find the device in the inventory, in the tab “Tools“. Click on the “Deck” in the lower right corner to go to the deck viewing and editing menu. 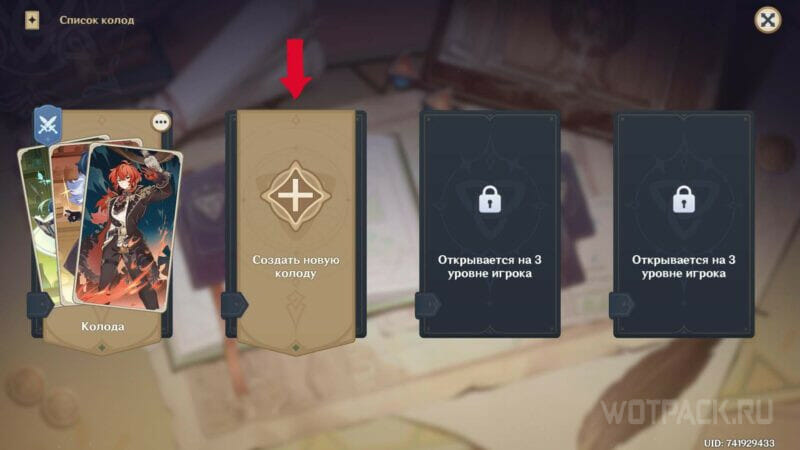 In the window “List of decks” you can see all the decks the player has, as well as create new ones (if there are empty slots). The first deck is formed during the training, the second slot is available after the completion of the initial quest. The third and fourth are opened upon reaching the third level of the player. To create a new deck, select an empty slot labeled “Create a new deck” and click on it. 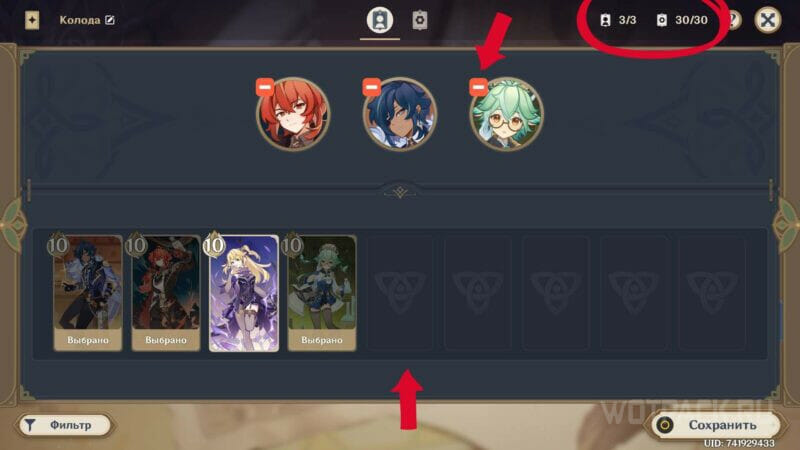 In the first tab of the editor, you can select active deck characters from the list of available cards below. Transfer the card of the desired hero to any of the three slots or remove the selected one by clicking on the scarlet sign “—” above the icon.

Pay attention to the counter in the upper right corner of the screen: each deck can only contain 3 active and 30 support cards. Any active map can be studied closer by clicking on it in the list. In the first tabMap” displays the skills of the selected character, their description, damage and value in dice. Also in the upper left corner of the card is the number of health points of the character. In the second tab of the deck editor, you are asked to select the necessary support cards. To facilitate the search for the desired card, use the function “Filter” at the bottom left of the screen. With the help of various mechanics, a map can be found by name by entering it in the line “Map search” or by selecting its characteristics in the section “Filter“. By checking the box “Show unopened cards” in “Display options”, you will see all currently existing maps. By selecting a card from the list, you can not only see its characteristics, but also immediately send it to the deck using the “Add“. You can remove an already added card using the “Delete“. In addition, an additional copy of the selected card can be purchased immediately, without contacting the Prince’s store. To do this, there is a function in the menu “Buy” below the map image. In total, it will be possible to purchase one copy for a certain number of Lucky Coins – the game’s card currency. 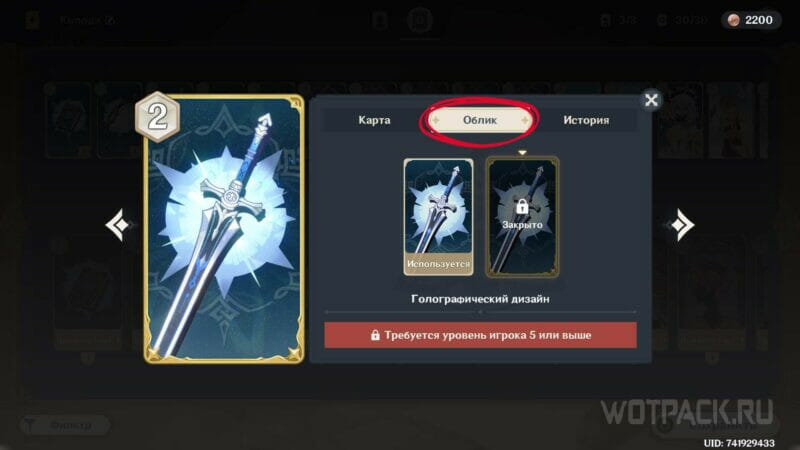 After creating a deck, you can edit it further by clicking on the three dots in the upper right corner. In total, several different functions are available in the menu:

Selecting a deck as active. In this case, in any duel, the Traveler will take part with this deck. The active deck is marked in the list with a blue icon in the upper left corner. 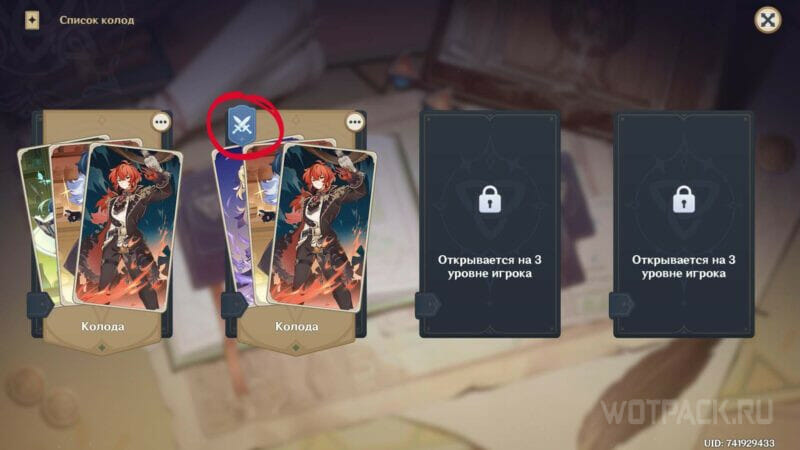 Rename deck. For your own convenience, you can choose any name for the created deck. Enter the desired name and complete the setting by clicking on the “Confirm” button. 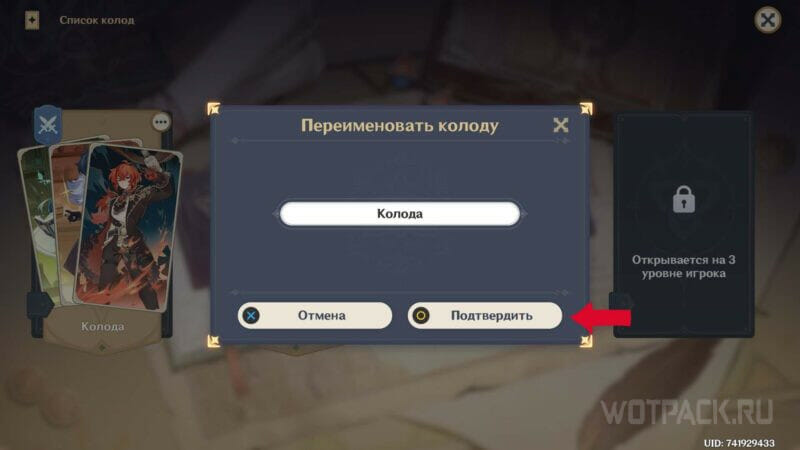 Deck appearance customization. In this menu, you can change the appearance of the playing field, as well as select any card back from the available ones. Finish editing by clicking the “Change” in the lower right corner. View deck. A simple feature for easy viewing of the built deck.
Copy deck. Create a copy of the completed deck to duplicate it for further editing.
Delete deck. Clear the slot for new decks by getting rid of the old one.

The best starter deck for beginners

This assembly is best starter deck in Holy Call of the Seven, as most of the cards are available from the start. All three characters are given in the first set. We will analyze their interaction and explain how to play it.

The weapons for these heroes should be taken as follows: part will be used, while the second is taken simply to fill the deck. Also check out the artifacts.

Take these cards as events.

It is worth analyzing the most important combinations of character cards and action cards.

Use these basic combinations to successfully complete the game. In addition, there is a certain strategy that only applies to characters. It is almost universal and does not depend on what actions fall out. 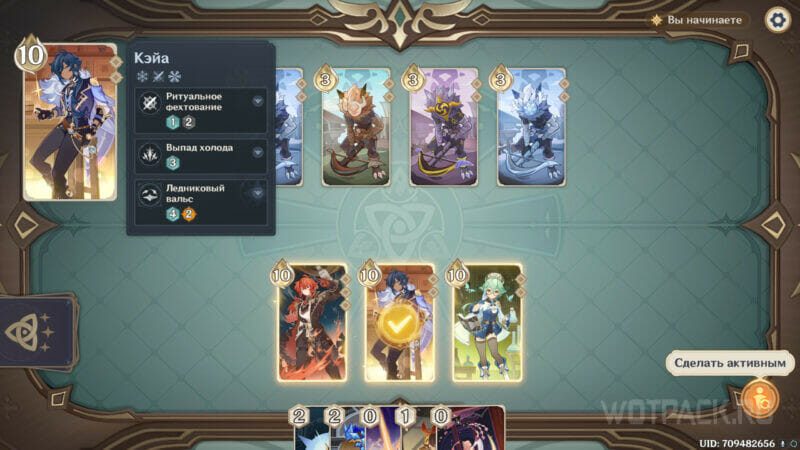 To get the most out of this build, we highly recommend using the following order:

Take Keia as your first active character. Use it to deal Cryo damage with a skill. Replace the active hero with Sucrose. With her help, you need to use a talent to spread Cryo to other enemies. This is the main combination of two characters. If you can, use Sucrose’s elemental skill to force you to change your active character to one with Cryo effect. When all enemies are Cryo-affected, take Diluc. Use it to deal damage to enemy characters by stacking Melt. Now you can safely switch back and forth, performing combinations. Exactly Dilyuk will be the main damage dealer in this build. If you can, use Sucrose’s ult on enemies with cryo effect. This will allow you to constantly deal Cryo damage, helping Dilyuk to damage. The explosion of Keii’s element and the change of the active character will allow you to constantly stack damage. This works especially well with the Dawn Distillery and the Change of Duty. Useful both for regular damage and for combo with Dilyuk.

As the name implies, this build comes from constantly stuffing the Freeze reaction on enemies with the help of Gan Yu, Kamisato Ayaka and Mona.

As equipment and artifacts, take the following cards:

When choosing an event deck, draw the following cards:

For support, these cards are best suited:

From strengths freeze decks can be distinguished:

Played only two elements, which makes it easier to roll dice. Constant reaction Freezes, which prevents the enemy from changing characters during the turn. Mona is elusive, so constantly protects other characters with the help of his elemental skill, which reduces the damage of opponents. 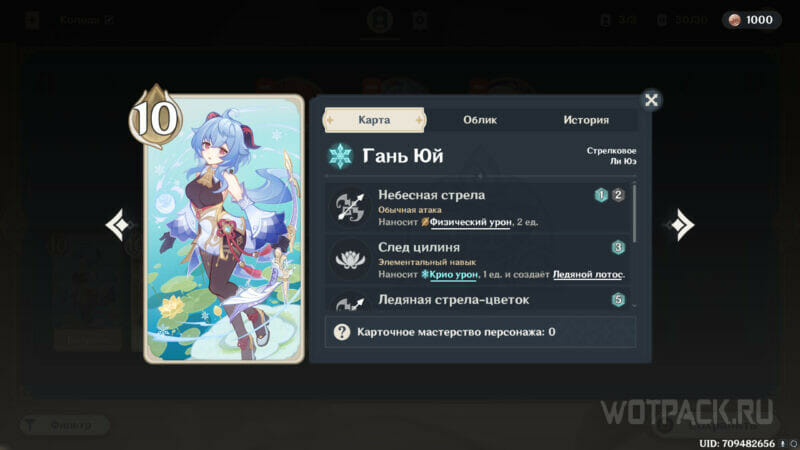 The build will take time to get the characters: all three can only be won through an invitation duel. At the deck no shields, no healing. The whole build goes to stop the opponent’s cards with the help of freezing. Pyro or physical damage breaks the freeze element response, so aggressive players can forget the main point of the deck. 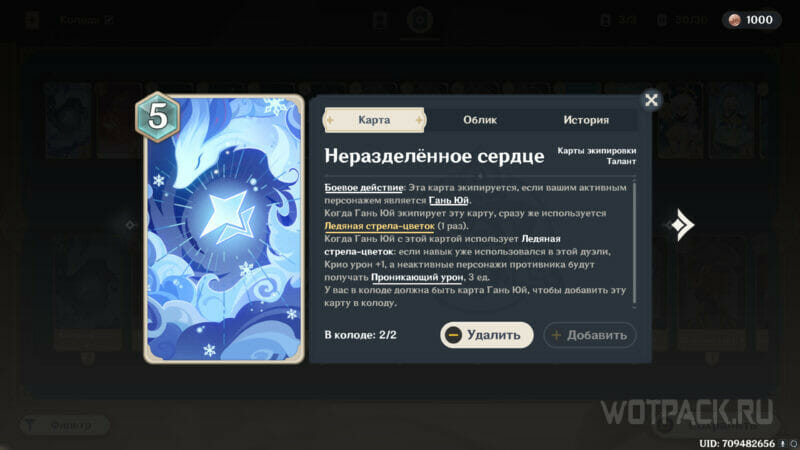 If we consider the tactics of playing with this deck, then it is worth understanding that main damage dealer – Ayaka, and Mona and Gan Yu are supporting characters. It is thanks to Ayaka that the freezing cycle will work. Constantly switch the active character between Mona and one of the Cryo-heroes, use their skill or ult to cause a reaction.

Ayaka deals damage with her normal attack with cryo infusion when switched to, so you don’t need to use the other two to cast cryo just yet. The style of the game is reflected, including in the action cards, which serve as a replenishment of energy or a switch.

If we talk about combinations, then there are only three main bundles that should be used with action cards.

Deck through reactions and damage in the final phase

The main advantage of this deck is the ability to deal damage after the end of the round, as well as additional damage with elemental reactions. overload, superconductor and evaporation.

Considering weapons and artifacts, take the following cards into the deck:

For events, choose the following cards:

Add the following cards as support:

Most of these cards are required to keep up the dynamics of the fight: getting more cards, dice or energy. Artifacts and weapons strengthen the characters, increasing their damage.

Gradually we will expand the list of decks and add other assemblies.

We hope our guide helped you build a strong deck for Holy Call of the Seven in Genshin Impact. Share your favorite builds with characters in comments. Read our other Genshin Impact guides in the corresponding section of the site.

Tom Clancy's The Division Resurgence: From today you can lend a hand

Hogwarts Legacy: The Chamber of Secrets will not be explorable for lore reasons