Apple has officially unveiled three new features to improve user privacy. We are talking about additional authentication in iMessage, the integration of physical authorization keys for Apple ID and end-to-end encryption in iCloud. 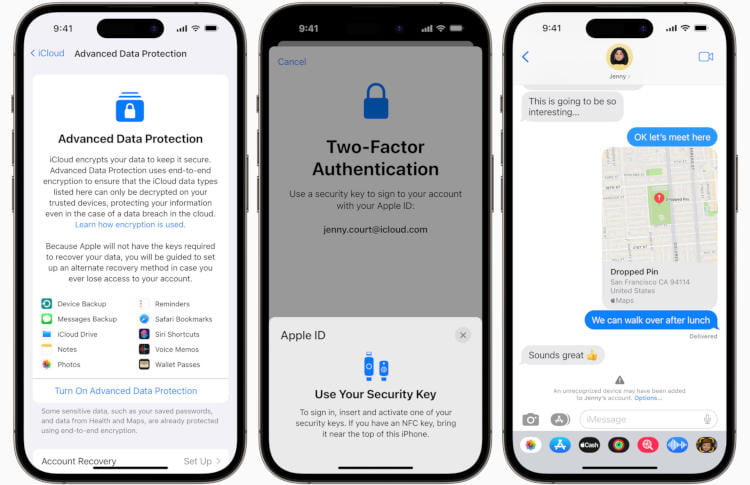 Apple has previously integrated support for end-to-end encryption into iMessage, so users can be sure that messages in chats are seen only by the sender and recipient. Now, the service is rolling out a new Contact Key Verification feature that should provide an extra layer of security that may be important to some Apple device users. Using Contact Key Verification, you can request key verification from the interlocutor, after which each of the participants in the correspondence will display the same code, which will allow you to verify the identity of the interlocutor. You can compare the identity of the code in any way possible, for example, using FaceTime or by phone.

Apple introduced support for two-factor authentication for Apple ID in 2015. According to the company, more than 95% of active users now use this feature. Support for third-party physical security keys will help make this tool even more reliable. Apple device users will soon be able to use physical security keys to log in with their Apple ID. This approach will make the process of using an Apple ID more secure, since attackers using various deceptive schemes to steal verification codes will not be able to overcome device security without having a physical key.

In addition, Apple announced the launch of the Advanced Data Protection program, which will support end-to-end encryption across 23 data categories, up from the previous 14. Among other things, end-to-end encryption will be applied to device and message backups, notes, photos, reminders, voice memos, and more.

Aroged: The Last of Us Part I will get to PC in early March

ZELENSKY: "Russia will be punished for mine terror in Ukraine"