Miso soup with ice in Genshin Impact: how to get the combo score to 50 and pass

Iced Miso Soup in Genshin Impact is the second challenge of the Akitsu Kimodameshi event from the “Fun” section, in which the Traveler will have to fulfill a number of requirements in order to complete it and receive maximum rewards.

In order to open this stage, you must complete the previous challenge “Hot Tempura” in fun mode.

In this guide, we will show you how to complete the Iced Miso Soup stage in Genshin Impact, get the combo counter to 50, and get the required number of points in tempering mode.

How to pass Miso Ice Soup in Fun Mode 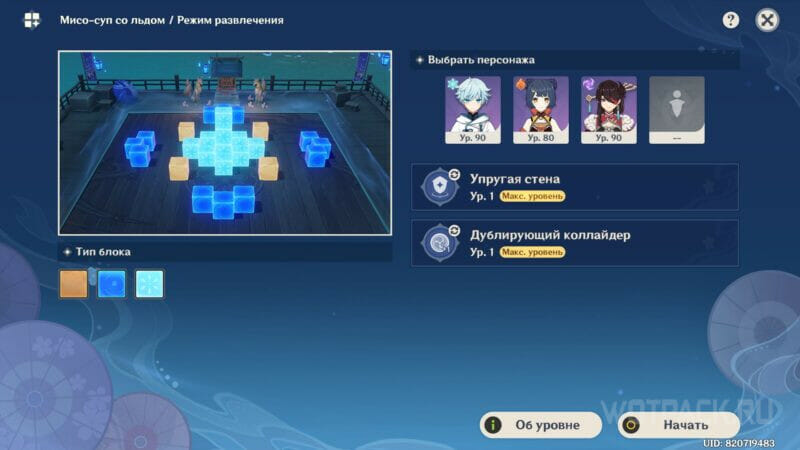 The entertainment mode playing field consists of basic, Hydro and cryo blocks. To successfully complete this stage, you will need Crio, Pyro and Electro characters.

Form a team of the available heroes and choose Yugei’s tactics that suit the game. The best choice would be a standard set of “elastic wall” and “Duplicate Collider“, so there will be more balls on the field, and thanks to the periodic buff, a barrier will appear on the field, helping to hit the balls when there are too many of them.

To get the maximum number of rewards, you must not only complete the test itself, but also at least once bring the combo counter to the mark of 50. 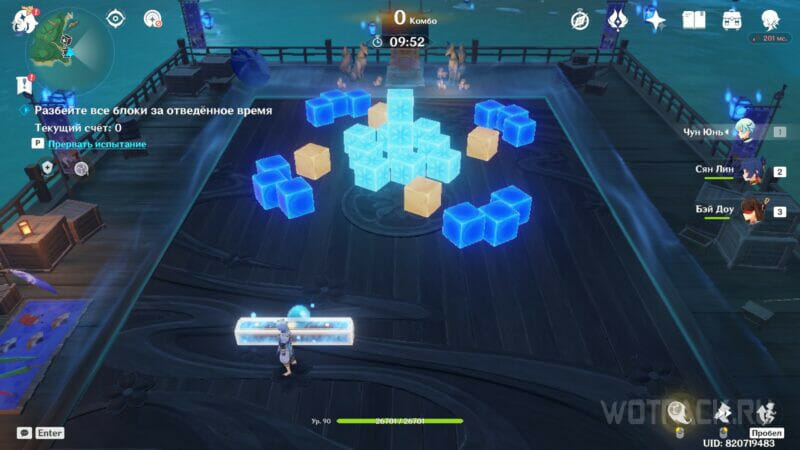 The Miso Ice Soup fun challenge will begin with a field of hydro blocks moving around in a circle and a small tower of Cryo cubes in the center.

From the start of the test use cryo characterto freeze spinning blocks and stop the whole mechanismso it will be easier to hit targets. 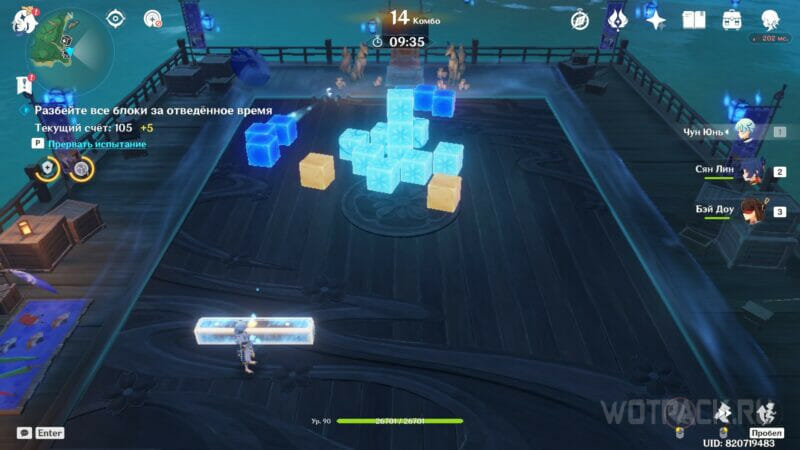 Having dealt with the Hydro cubes, you can switch to the Electro hero and destroy the remaining structures in the center of the playing field. 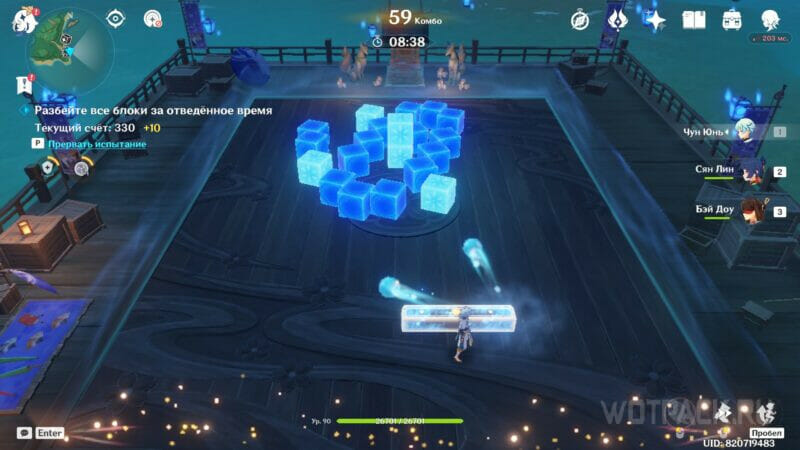 The second stage of the test in fun mode consists entirely of Hydro and Cryo blocks, which greatly simplifies the passage. Use the Electro character to launch High voltage reaction when interacting with Hydrocubes. Such an interaction destroys not only the block that the ball hit, but also many others in a small radius. 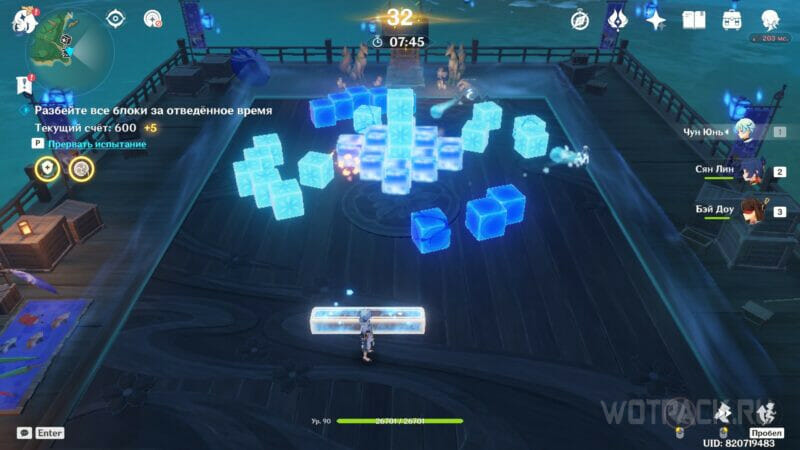 When passing the last stage of the mode, you will again have to deal with rotating mechanisms on the playing field. Use Hero Cryo to freeze hydro blocks and stop rotation. The remaining Cryo Cubes can be destroyed in any convenient way. 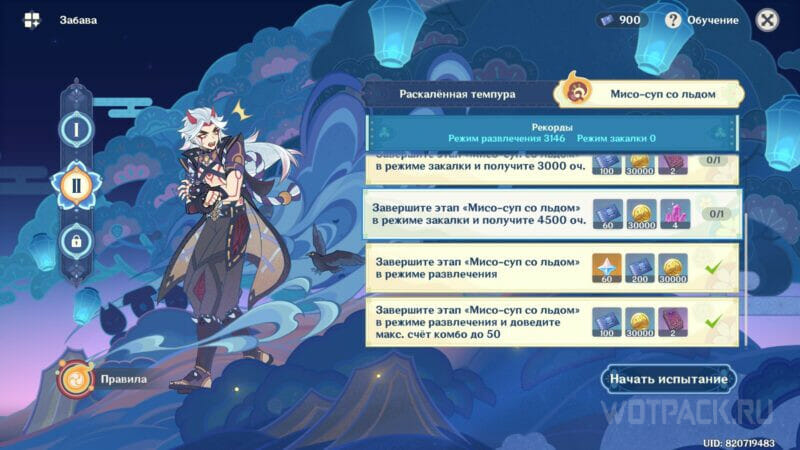 After completing the game, do not forget to collect rewards in the event menu. 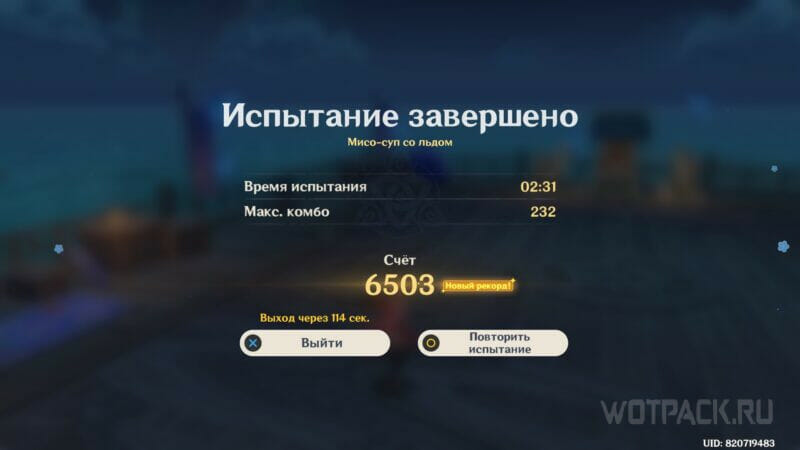 The number of combos depends on how many blocks were broken by the ball (or balls, if there were several) without losing it. The counter is reset when all balls on the field have been lost.

In order to bring the combo score to 50 and above, you can use several methods:

Select certain Yugei tactics in the level preparation window. Good options would be:insane speed“, which increases the speed of movement of the character on the playing field, “Relative expansion“, which increases the size of the platform when switching characters and “elastic wall“, which summons a barrier in the lower part of the field that does not allow you to lose balls. 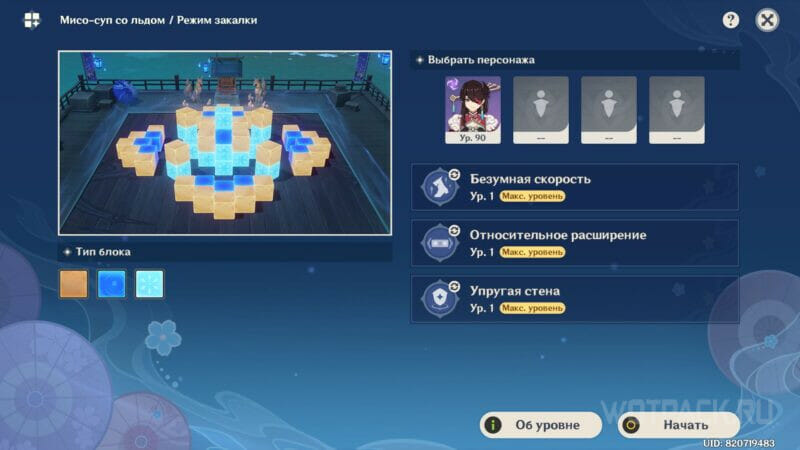 Use the features of the playing field. When testing, pay attention to narrow and hard-to-reach spaces. A ball that has fallen into such a place can stay there for a long time, breaking and bouncing off the accumulation of blocks. 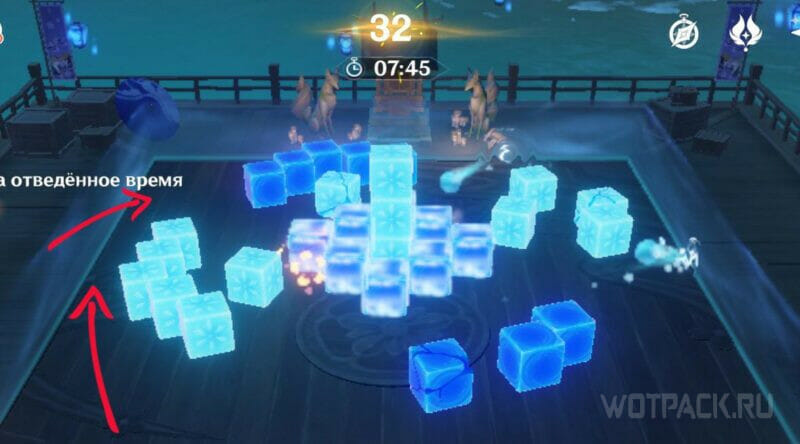 Use characters that match the elements of the challenge blocks. If the playing field is rife with Hydro Cubes, be sure to take a Cryo character capable of to freeze all water blocks nearby and break them in an instant. If there are few such blocks, use the Electro element, which causes powerful explosion within impact radius of the Hydro Block and destroying most other cubes in the area.

How to pass Miso soup with ice in tempering mode 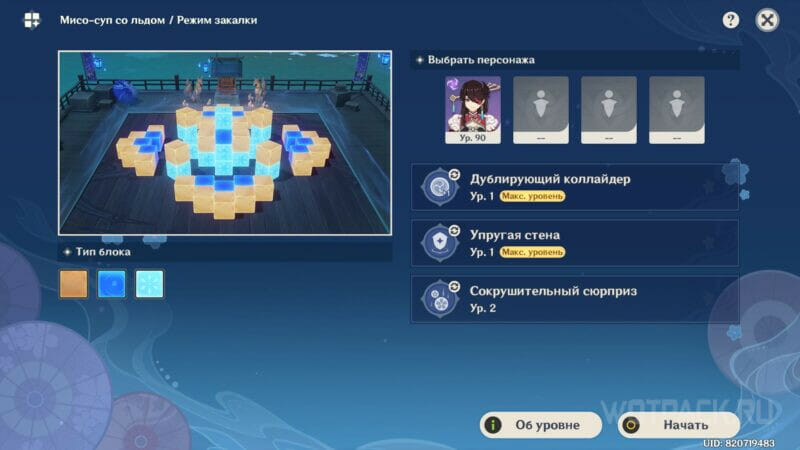 The game boards for testing Miso soup with ice in tempering mode also consist of standard, Hydro and Cryo blocks. All you need to complete this step is one Electro characterable to successfully interact with the features of this field.

To pass the test, tactics are suitable:

Duplicate Collider for more balls on the field.
elastic wall for periodic protection against the loss of balls.
Crushing Surprise for a quick score.

The beginning of the test is a large spinning mechanism of Hydro blocks on the edges and a small tower of Cryo cubes in the center. Try to run the ball to the center of the structure, waiting for a convenient moment when the side blocks open the way. Thus, a ball that has fallen into the central space will remain there for a long time, destroying everything in its path. 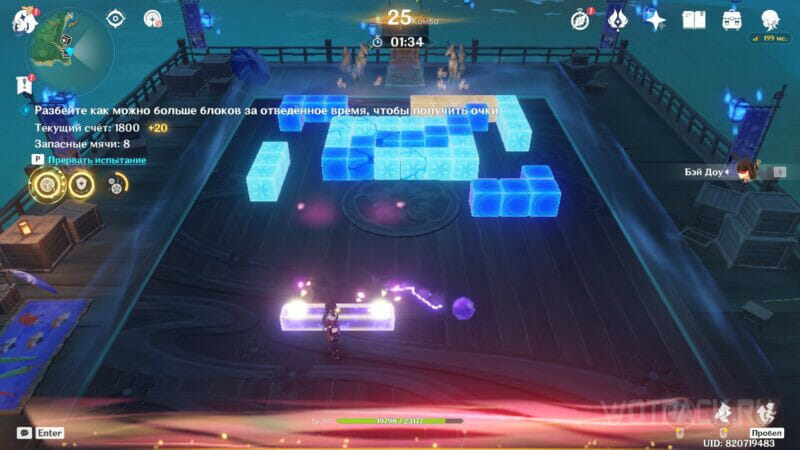 The playing field of the second stage is made in the form of a rectangle convenient for destruction by Electro attacks. Aim at Hydro Blocksto carry out High Voltage reactions that cause an explosion and destroy everything in the nearby area. 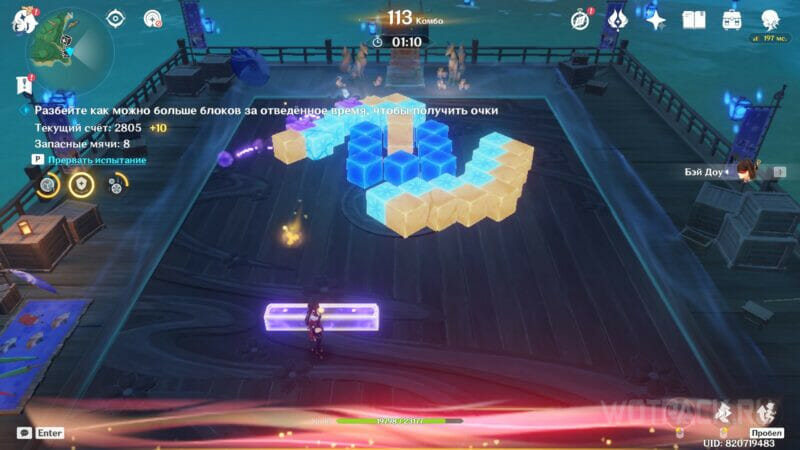 Having reached the third playing field, try to continue to adhere to the tactics described earlier. Direct Electro attacks towards the accumulation of Hydro blocks to clear the area faster. 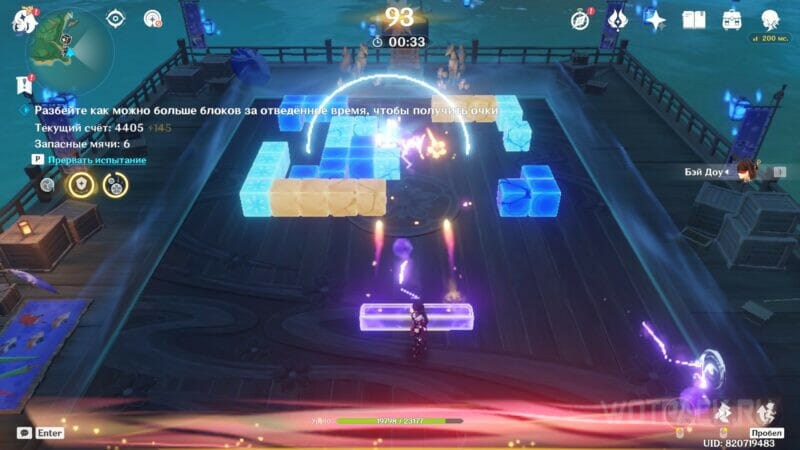 Sometimes the fields in hardening mode can be repeated. The fourth stage of the test completely repeats the second, so problems with its passage should not arise. 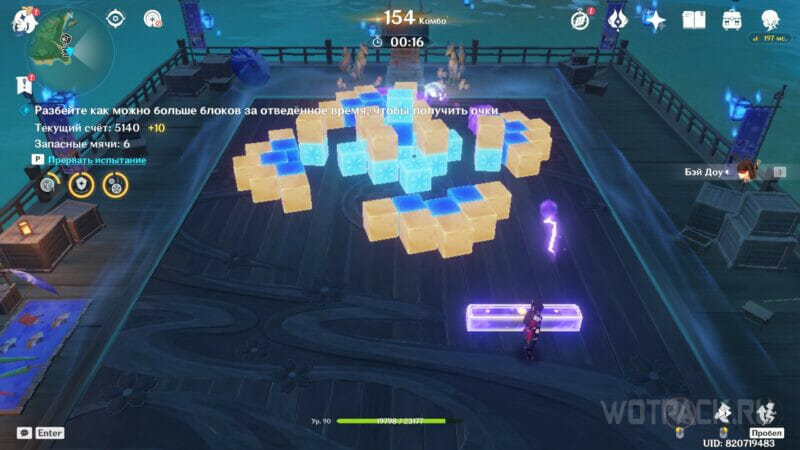 Another duplicate step. Last playing field exactly the same as the first. If there is still time left for this stage, try to hit the ball to the center, to the tower. So the ball will fall into an almost closed space and stay there for a long time, bouncing from one block to another. 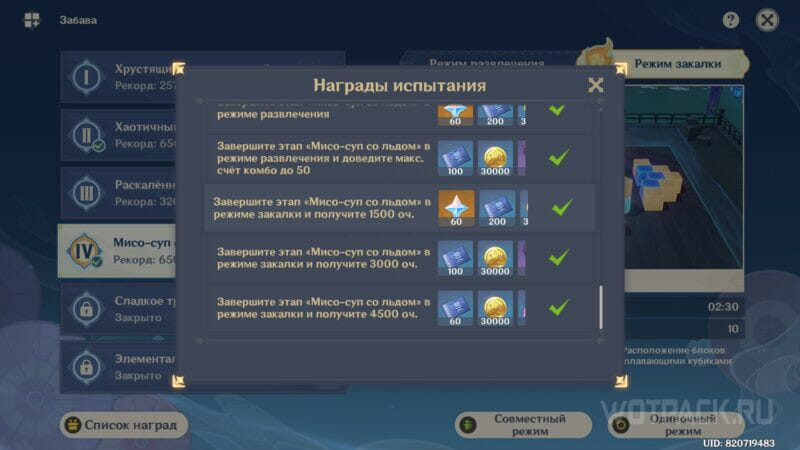 After completing all the challenges, take the appropriate rewards from the event menu.

Completing the Iced Miso Soup Challenge in Fun and Hardening Modes will award the following rewards:

We hope this guide helped you complete the Genshin Impact Ice Miso Soup Stage and achieve a combo score of 50. Stay tuned for more guides in the main Akitsu Kimodameshi event article.

Jabeur takes the title at the exhibition tournament in the UAE

Twitter Space is open again! Here are the details

Crash Bandicoot: On the Run! will close its doors in February 2023