Forged in the Mist chapter gave fans of Dead by Daylight not only a new assassin, but also a new strategy game mechanic, using which the player controlling the Knight is able to send his guards on patrol during the match. Unlike Nemesis zombies, guardians can damage generators, break obstacles, and even patrol the area looking for survivors and initiate a hunt for them on their own.

Opposing the killer in the new chapter will be Vittorio Toscano, who can accumulate the progress of repairing generators and significantly speed up their repairing allies. Additionally, performing great reactions allows Vittorio to briefly see the killer’s location, making him a great hero for a general rush. 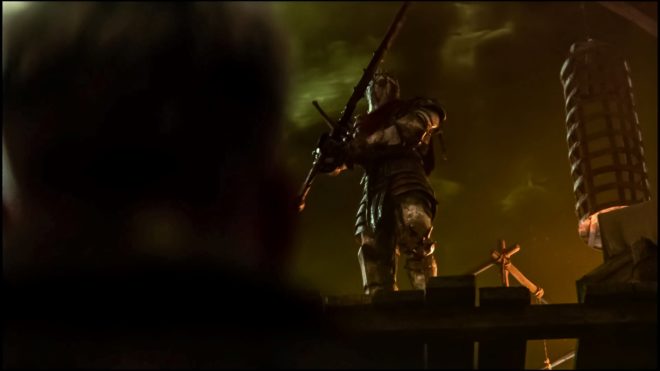 Once the Knight was known under the name Tarhos Kovacs. Having miraculously survived the massacre in his native Hungarian village, Kovacs was brought up in slavery from an early age, where he, along with the rest of the slaves, was taught the military craft and the knightly code of honor, in order to later use the fighters as mercenaries. There, in the camp, Kovacs put together a small detachment of three followers, which he called his pack. It included apprentice armorer Alejandro Santiago, stealth master Darkos Malechek, and broad-shouldered giant Sander Rolt.

For years, Tarhos and his flock participated in foreign wars in distant lands, until one day he was granted the rank of knight and granted freedom. After leaving the detachment, Tarhos vowed to earn enough money to redeem his followers from slavery. To this end, he went as a mercenary to a wealthy Italian lord, the eccentric Duke of Portoscuro, famous for his irrepressible craving for ancient knowledge and mysterious artifacts.

After one of the expeditions, Tarhos betrayed his employer, imprisoned him and plundered the duke’s property, and with the proceeds he hired an army, with which he defeated a detachment of former comrades-in-arms, achieving freedom for his flock. Eager to learn the secret of the symbols engraved on the stone, Tarhos tortured the duke’s family to death, but never got an explanation from his former employer. 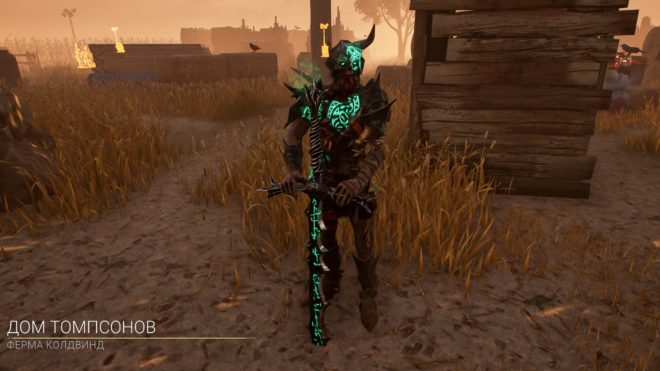 Very soon, the local aristocrats realized what a threat the free detachment of Tarhos, which occupied Protoskuro, posed. Noble gentlemen sent a huge army to the city to get rid of the distraught warrior. In the heat of the bloody battle, Tarhos and his associates, doomed to death, were covered with a thick fog, which carried the four into a completely new, “impeccable” sphere of essence.

The Knight is a claymore-wielding assassin of medium height with a movement speed of 4.6 m/s and a terror radius of 32 meters. The special ability of the Knight “Guardia Squad” allows the player to activate the watch mode to send one of the ward guards on patrol.

When the power button is pressed, the player instantly, but for a limited time, gets the opportunity, like the Spirit, to quickly glide over the location, leaving a train, which will later become a patrol line. When the strength bar is empty, an executioner, a thug or a jailer will appear on the field. 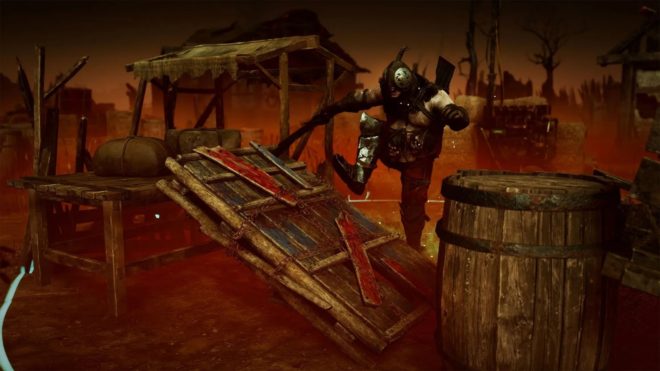 In addition, with the help of the same ability, the Knight player can direct the guard to break the obstacle or damage the generator. In this case, the patrol will not be carried out, but the guard will instantly appear at the specified object and perform an action, after which he will disappear, and the power bar will begin to recharge.

The patrol itself does not last long, but if during this time a survivor gets into the guard’s viewing radius, the monster will throw a standard at the detection point, rush towards it, and then start chasing it. The knight will receive an appropriate sound notification and the icon of the hunted survivor will begin to glow. Using the guards, the Knight is able not only to save time on damaging structures, but also to naturally drive his victim, surrounding him or moving across, focusing on the direction of movement of the ward chasing her. 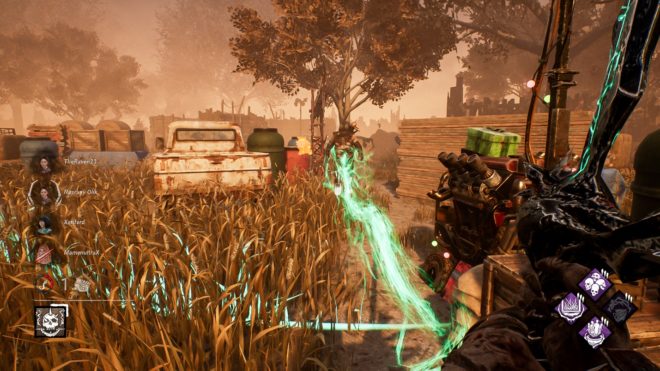 Guardians are always called in a strict sequence. Who exactly from the flock will appear on the field, the Knight sees thanks to special symbols. It is important to take into account the characteristics of each of the guards for a more effective game. So, the Executioner breaks obstacles faster than others and damages generators, it is more difficult to escape from the Cutthroat, and the Jailer patrols the area longer, and his viewing radius is higher than that of the rest of the pack.

A survivor can hide from the guard by holding out until the end of the hunt, taking his standard, or unhooking another survivor while hunting. In addition, the guardian instantly disappears if he manages to injure his victim. When mortally wounded by a guardian, the knight gains a temporary effect of the killer instinct in order to quickly find the fallen one. 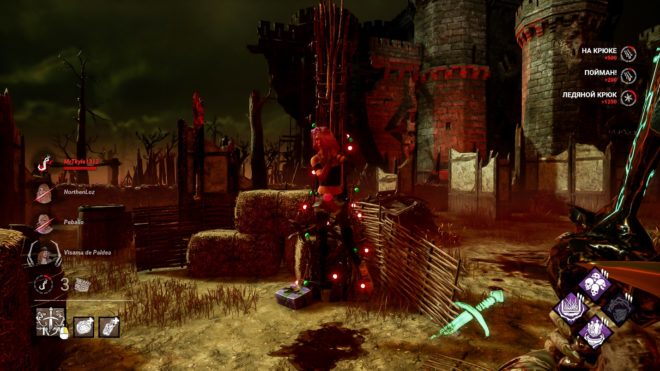 The new killer has some interesting perks. A fully developed “They Can’t Hide” allows the Knight to see the auras of survivors within 24 meters of him for five seconds when the generator is damaged, and “Fierce Pride” punishes those who shine a flashlight, penalizing the blinded Survivor with Vulnerability by 20 seconds.

In addition, the Knight has his own Corruption: Darkness. Each time a Survivor is wounded, the Dim Totem will corrupt the victim. And while it is active (at the maximum level – 25 seconds), all other survivors who are outside the Knight’s terror will scream from time to time. At the same time, the survivors themselves see the aura of the cursed ally for the duration of the corruption, and if he receives a mortal wound while being cursed, the totem will dim, and the corruption will be removed. 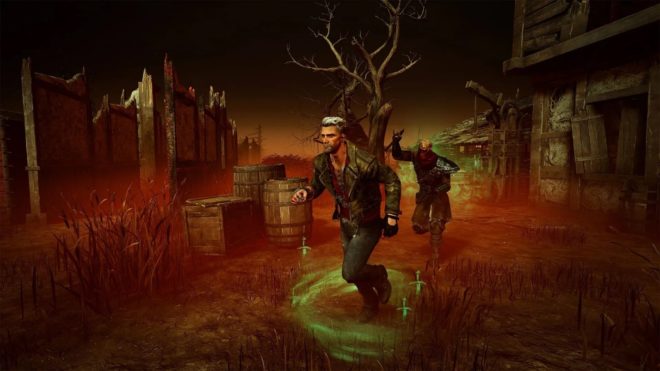 Toscano is the same eccentric Duke of Portoscuro who, to his misfortune, hired Tarxos as a bodyguard and was betrayed by him. The knowledge-hungry Vittorio has devoted his life to unraveling the mysteries of the enigmatic Watchers in the hope that he can use their formulas to bring peace, harmony and order to a place where cruelty rules.

Traveling around the world, Vittorio collected artifacts of the ancients, until one of the keys led him to a secret treasury under the Palace of Knossos, where Toscano discovered information about an ancient school that preserved the mysteries of traveling between the facets of being. The desired key to the Watchers was that ill-fated stone, because of which Tarhos brutally cracked down on the guards of Sinta, and then imprisoned Toscano himself in a dungeon.

On the day of the attack on Protoskuro, Tarhos intended, but did not have time to deal with his former master, but death still reached out to Vittorio. And when he, exhausted and surrendered, began to fall into oblivion, dreaming of a better world, Toscano was enveloped in a black fog. 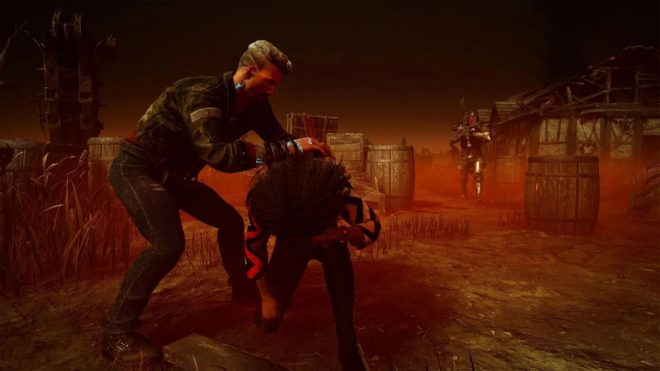 The new survivor Vittorio Toscano’s style of play, with his own skills of course, involves extreme play aimed at quickly repairing generators. His skill “Quick Gambit” allows you to distribute an effect to allies within a radius of up to 24 meters from Toscano, which speeds up repairs by 8%. True, the ability only works when the killer is chasing Toscano.

Wise in the Mist allows Vittorio to detect the location of the killer, no matter where the villain is on the map, and no matter how stealthy, every time Toscano passes a great skill check. At the maximum level of development, “Mist Wise” reveals the enemy’s aura for a full six seconds.

Finally, the “Potential Energy” ability allows Toscano, while repairing a generator, to use the ability button to charge this skill instead of repairing the device. For every 1.5 percent repair of the generator, the player will receive a token, and they can collect up to 20 such tokens. 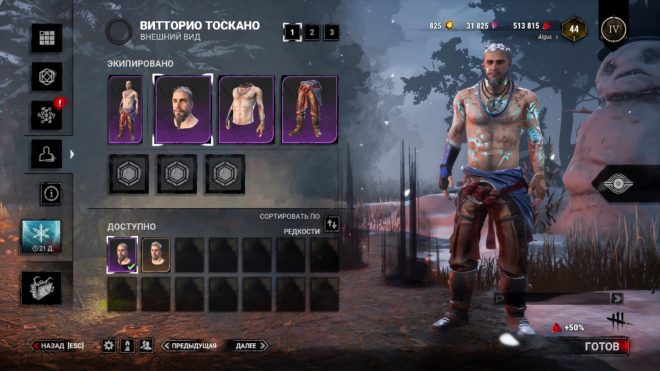 Subsequently, when repairing the generator, the player will be able to use all the accumulated tokens at once to instantly speed up repairs by 1 percent for each. In this way, Toscano will be able to quickly repair strategically important generators, which are difficult to reach due to the killer scurrying nearby. However, if he gets hit before he uses up the tokens, he will lose all charges, and if he fails his reaction check, some of the tokens will also be lost. 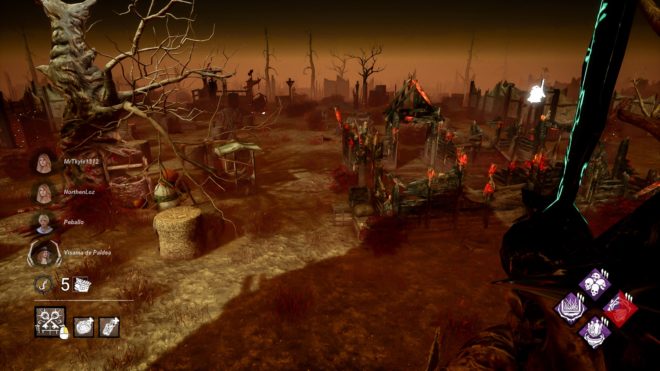 In addition, a new map has appeared in the game – a smoldering village darkened by ashes with dilapidated houses and scorched earth. On the map there is a gallows, a huge tree, a dump of carts and a two-level, miraculously surviving house in a ruined square.

For my taste, the map looks rather mediocre, it does not contain any bright, memorable elements and consists entirely of black and red shades. But it has a lot of cover, it is quite light and not too confusing.

The chapter “Forged in the Mist” was a success. In particular, thanks to a very interesting Knight, which greatly diversifies the gameplay for the killers and is not too difficult to perform. Vittorio Toscano has good skills. I am sure that some of them will definitely replenish the rotations of current builds.

By the way, curious skins have been developed for both characters, thanks to which the killer becomes like a real death knight, and Toscano runs around with a naked torso decorated with luminous letters.

Croatia - Morocco. Fight for bronze. Starting lineups for the match are known

The creators of "Wednesday" are already working on a sequel

Spider-Man: Across The Spider-Verse: Impressive trailer for the new Spidey film

Scholar of the Arcane Arts Preview – Hardcore School of Magic

A historic change for the video game industry!