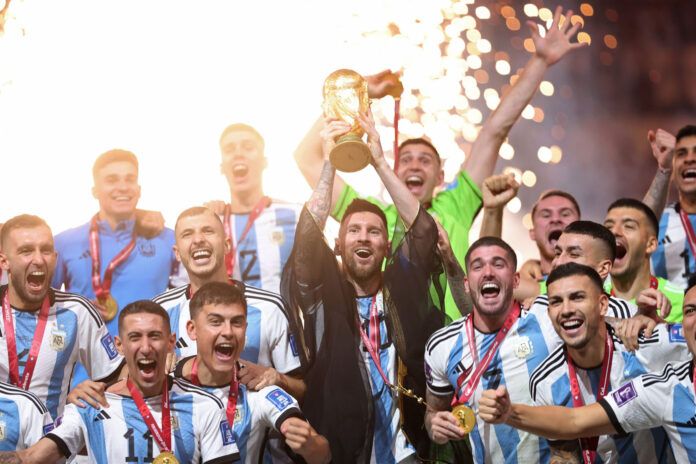 Today was held in what is hands down one of the most beautiful world finals football fans have ever seenwith two very aggressive teams who played for 120 minutes giving a show. As if that weren’t enough, we have witnessed the generational confrontation between two monsters: one on the way to sunset, Lionel Messi, and one who will give us many joys (and pains, depending on the case), Kylian Mbappè. The winner was theArgentina, graduating World Champion 2022…and EA SPORTS predicted it over a month in advance! November 8, to be exact.

EA SPORTS has been making predictions on the winners of various competitions for several years nowincluding the World Cup. And on a day where Kylian Mbappè scored a historic hat-trick which catapulted him straight there, together with the memorable Geoff Hurst in 1966, EA SPORTS makes a four of a kind, guessing again the new World Champion. However, they did not guess the other finalist, considering Brazil the favourites. Not bad, because perhaps we would not have witnessed such a final.

This memorable final saw the first half end with a 2-0 victory for Argentina (Messi on Rigore and Di Maria in the 36th minute) who seemed to have closed the question by now. Just over 10 minutes from the 90th minute, Kylan Mbappè literally resurrected France, scoring 2 goals in just 2 minutes, then crowning a hat-trick in extra time.

It’s not a final you attend frequently. Such an exchange of blows is really rare, and let’s face it: both Mbappè and Messi deserved to lift that coveted cup, giving phenomenal performances. However, there can only be one winner, and tonight he certainly wasn’t wearing a blue shirt. And tomorrow we will only read one headline: Argentina 2022 World Champion.

We remember that EA SPORTS also guessed the 2021 Formula 1 World Champion, thanks to a simulation on the Codemasters game. We remember that on that occasion, just like today, there were two phenomenal contenders for the title: Lewis Hamilton and Max Verstappen. There it was though the new guard to establish itself in what turned out to be a truly controversial race. The Dutchman then swept away all doubts in 2022, totally dominating the championship.

Android: see if your smartphone battery is healthy!

Gaming Mouse: Wireless Xtrfy M8 with up to 75 hours of battery life

AI images show what Superman would look like in Victorian style

Kremenchuk’s coach: All matches between championship leaders were emotional