After the rumors of the past few days, the new editions called “Final Fantasy Pixel Remaster” have now been officially announced for the PlayStation 4. Including a limited Collector’s Edition, which is offered at a price of just under 275 euros.

After Square Enix a few months ago pointed outthat player demand could lead to the Final Fantasy Pixel Remaster series making its way to consoles, the console implementation appeared in the ESRB databases this week.

The pixel remasters can be purchased individually or in the form of a bundle, which is available in both a download version and a retail version and includes all six classics.

Final Fantasy Pixel Remaster brings the first six main installments of the long-running Final Fantasy series back in a remastered pixel look. In addition, further improvements such as newly recorded soundtracks, bestiaries, optimized user interfaces or the option to let the fights run automatically are being introduced. There are also adjustments to the legendary opera scene from “Final Fantasy VI”, which has been revised visually and acoustically.

If you want to spend a little money and put the “Final Fantasy Pixel Remaster” title on your home shelf in the form of an exclusive limited edition, the announced “Final Fantasy 1-6 Pixel Remaster -FF35th Anniversary Edition “ struck gold, the Square Enix about the in-house online store sells.

The console versions of “Final Fantasy Pixel Remaster” have not yet been given a specific date. Instead, there is only talk of a PS4 and Switch release in spring 2023. 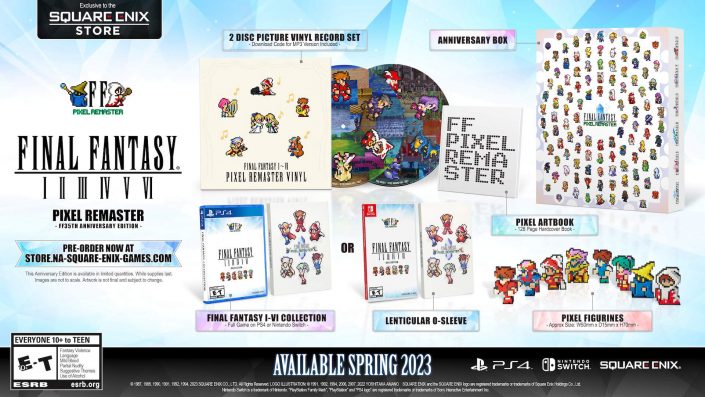 “We made this game as if it were the last”, this Final Fantasy game more complete than ever

The Switch version of ARK: Survival Evolved will receive the Ragnarok DLC next week

GameStop offers: The 2022 Advent Calendar has arrived. Here are the best offers for December 18th

The Last of Us: Movie poster commemorates the first game

Gakpo has chosen a new club. But they still think