Flexibility after panic. How Scaloni took Argentina to the 2022 World Cup final

The Argentina national team shocked the football world with the start of the 2022 World Cup in Qatar. The team, which had a 36-match unbeaten streak, suddenly lost to the Saudi Arabian team (1:2), which became one of the most significant sensations not only of the current World Cup, but in the entire history of the world championships. Who would have thought, but the main star of the “white-and-blue” Lionel Messi and the head coach of this team, Lionel Scaloni, were under enormous pressure after their first match at the tournament in Qatar. All because fans and experts wanted to get an answer – what happened on November 22 in Lusail? ..

The sensational defeat by the Saudis brought criticism towards Scaloni, including for personnel decisions. For example, many experts were perplexed why in the center of defense the coach decided to trust 34-year-old Nicolas Otamendi from Benfica, and not 24-year-old Lisandro Martinez, who moved from Ajax to Manchester United in the summer for 57 million euros. In addition, the idea to use the classic 4-4-2 in the formation remained unclear, where Lautaro Martinez and Lionel Messi appeared in the attack from the start, while Alejandro Gomez and Angel Di Maria acted deeper on the flanks.

Such a tactical choice of Scaloni allowed the Saudi team to operate with a relatively high defensive line, and after three uncounted goals due to offsides, the Argentines finally lost the momentum of confidence, and at times looked frankly confused. By the break, Argentina had to win with a score of 4:0, but led only minimally (1:0), and even then thanks to the ball scored by Lionel Messi from the penalty spot. After the break, the Saudis literally knocked out the opponent with two goals, to which the South Americans could not answer, despite the fact that they delivered 10 shots to the opponent’s goal, of which 2 were blocked, 4 hit the target, and only 7 were struck from outside the penalty area .

In the second round, Argentina met with Mexico and, judging by the decisions of Scaloni, the head coach of the “blue and white” to some extent succumbed to panic. The specialist almost half changed the team’s starting line-up, throwing out three of the four defenders who played against Saudi Arabia, and also replacing two midfielders.

The result of such hectic permutations was a 2-0 victory, which Argentina won not without difficulty. It is worth highlighting the frankly unsuccessful game by Lautaro Martinez, who spent 69 minutes on the field against the Mexicans, but managed to distinguish himself in only 22 technical and tactical actions, of which only 6, or an insignificant 27%, were successful … Replacing Lautaro with Julian Alvarez allowed Argentina only slightly improve the state of affairs in the attack, and if it were not for the phenomenal ability of Lionel Messi to actually decide the fate of the episode alone, who knows, Scaloni would have had to invent something else at the World Cup in Qatar, or the third match in the group against Poland would have turned into him and the “blue and white” into a mere formality …

It was Messi who gave Scaloni the opportunity to move away from the knockdown, which the mentor fell into after the starting defeat from Saudi Arabia, to gather his thoughts and change the situation for the better. In addition, following the results of the match with Mexico, the White-and-Blues coach realized that in Qatar he could safely and fully count on the 23-year-old Brighton midfielder Alexis McAllister, who demonstrated an excellent passing culture (89% of the midfielder’s passes were accurate), as well as who showed himself well in martial arts (the midfielder left 7 out of 10 duels). 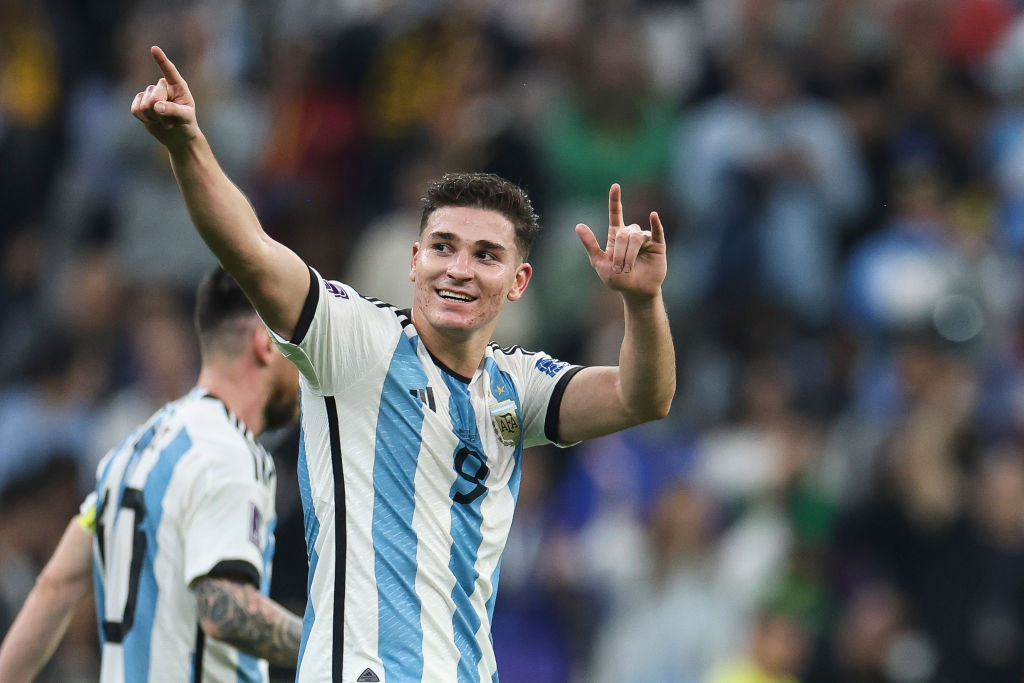 Having received a minimal advantage in the score against Mexico, Scaloni decided in the last twenty minutes to tactically change the pattern of the game of his wards. Argentina changed the formation from 4-4-2 to 5-3-2, as a result of which Christian Romero was added to Lisandro Martinez and Nicolas Otamendi in the center of defense.

For the match against Poland, Scaloni did not release the insipid Lautaro Martinez in the starting lineup, but the much more interesting and active Julian Alvarez, who played on the left in attack, but it was decided to push Angel Di Maria forward to the position of the winger, leaving Lionel Messi alone in front. In other words, against the Europeans, Argentina used the 4-3-3 formation, which, after the first goal scored, was changed to 4-4-2, and after their second goal, the “white-blue” completely moved to the 3-4-3 model with Messi on the flank and Lautaro Martinez in the center of the attack.

On the person of Lautaro, it is worth dwelling separately. This is a forward of exceptional talent, but at the tournament in Qatar he lost confidence in his abilities, and absolutely logically gave way to Julian Alvarez. The latter, on the contrary, took advantage of the chance, and together with Messi became a key figure at the forefront of the Blue and White attack. So far, Lautaro Martinez in Qatar has earned a total expected goals of 1.5xG, but has not scored a single goal … Alvarez has 4 goals in the asset at 1.83xG, and therefore the question of who should go into the starting lineup of the Argentina national team for Scaloni, obviously, ceased to be on the agenda after the game with Poland, the victory in which allowed the South Americans to reach the playoffs, and from the first place in the group.

The match with Poland also finally strengthened Scaloni in the understanding that in midfield the bet should not be placed on Alejandro Gomez and Leandro Paredes, but on the already mentioned McAllister and the 21-year-old Benfica centre-half Enzo Fernandez. The latter in the match with Poland demonstrated a phenomenal intensity and effectiveness of actions. In 82 minutes on the field, Enzo scored 110 technical and tactical actions, and 89% of them were successful! And in general, the result with the Poles (2: 0) was brought to the Argentines by those whom Scaloni did not see in the starting lineup at the beginning of the tournament – McAllister and Julian Alvarez scored a goal, and it was Enzo Fernandez who assisted the latter.

This energy around Messi proved to be decisive for the further results of the Argentines. In the 1/8 finals, Scaloni went to Australia with a 4-3-3 arrangement, and Julian Alvarez had to be used on the right in the attack due to an injury to Angel Di Maria, and on the left, for the first time after the fiasco against Saudi Arabia, there was a place for veteran Alejandro Gomez. But already in the 25th minute, Scaloni realized that his team would be much better off playing with the islanders according to the 4-4-2 model, as a result of which Alvarez was assigned to Messi in the center of attack, and this ingenious decision of the mentor brought an amazing result – both forwards scored a goal, and Argentina celebrated a victory with a score of 2: 1, and in the second half it again seriously changed when Lisandro Martinez played three center-backs in a 3-5-2 scheme when Lisandro Martinez entered the field.

Lionel Scaloni showed his true tactical flexibility in the quarter-finals against the Netherlands. He started with 3-5-2 for the first time at the tournament in Qatar to repeat the opponent’s formation in the face of experienced Louis van Gaal, and it worked! An energetic trio of Argentines in the center of the field, consisting of Alexis McAllister, Rodrigo De Paul and Enzo Fernandez, were complemented by extreme fullbacks Marcos Acuña and Nahuel Molina, and Julian Alvarez and Lionel Messi were already in front. And even though the Argentines had a little less possession of the ball (49% vs. 51%), but in the final phase of the attack they turned out to be much more persistent and inventive – 15 shots vs. 6 (5:2 – on target). 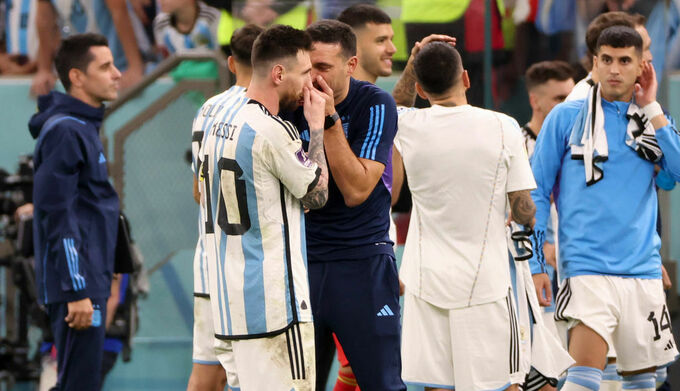 Obviously, the two-goal head start, which Argentina missed in the last seconds of the quarter-finals, the Netherlands were able to win back solely thanks to the physical condition and anthropometry of a number of their performers. But in the penalty shootout, the last factor no longer mattered in the slightest, and Scaloni’s wards issued a victory, and with it a ticket to the semi-finals.

Against Croatia, Scaloni opted to go back to 4-4-2, and Leandro Paredes was again found in the Blue and White starting lineup. With this decision, the Argentine mentor surprised many, but it turned out to be absolutely logical, given that they had to confront a dangerous trio from the Croats camp (Modric – Brozovic – Kovacic), which is able to control the course of almost any fight. 28-year-old Paredes won almost the entire fight in the center of the field (10 out of 12 duels), and was also flawless in the execution of passes (33 accurate out of 36). When Scaloni decided to replace Paredes with Lisandro Martínez, Argentina were 2-0 up and re-adjusted to a more cautious model with three centre-backs (5-3-2), calmly and confidently bringing the match to victory, which meant one is to reach the final.

Scaloni and Argentina reached the final with only three “sacred cows” in their lineup. All matches at the 2022 World Cup from whistle to whistle in the camp of the Blue and White were played only by the magnificent goalkeeper Emiliano Martinez, the experienced center back and one of the favorites of the head coach Nicolas Otamendi, and also the leader of the team Lionel Messi. Too much still depends on the latter, which is why a number of observers, neglecting the tactical moves of Scaloni described above, note that the head coach of Argentina only needs to follow one single scheme – any ten players plus Messi. Of course, this is too big a convention, but a lot really depends on Lionel. The last thesis is also confirmed by Messi’s game form – at the World Cup in Qatar, it is the leader of the Argentines who has the maximum individual indicator of expected goals (5.78xG), and also hit the opponents’ goal more often than others (27 shots) and earned the most fouls on himself (19) .

On the other hand, in the final, Argentina will have to play against France, whose ranks include the second player in the 2022 World Cup in terms of individual expected goals – Kylian Mbappe (3.72xG), who in reality scored as many as Messi (5 goals each) . France also has Antoine Griezmann, who is the world’s best in expected assists (2.98xA), which will leave Scaloni with the daunting task of covering both Mbappe and Griezmann at the same time.

Will the head coach of Argentina be able not to panic in the final and win it due to the tactical flexibility that he began to demonstrate so skillfully from the third match of the group stage? This will become known only following the results of the Sunday duel between the two best teams of the Qatari World Cup, and the confrontation between the coaching decisions of Scaloni and Deschamps will, of course, become a true decoration of the decisive match.

The 8 best free games released in 2022 to have fun without breaking the bank!

Assassin's Creed Valhalla at 15 euros, the new discounts on the GameStop Advent Calendar

Payday 3: The same game on the consoles and the PC, the developers assure

Star Wars: The audience’s favorite series is back in force, with the actor starring in The Last of Us!