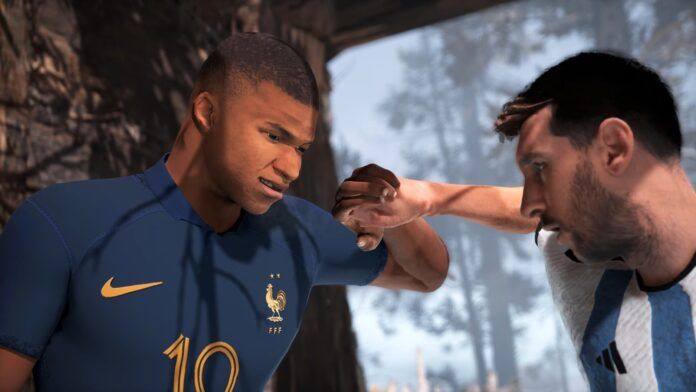 The first boss fight of God of War (2018) is undoubtedly memorable, but the youtuber Omega Fantasy has decided to make it even more unique by replacing the models of Kratos and Baldur with those of Kylian Mbappé and Lionel Messi, the real protagonists in the final which saw Argentina and France contending for the title of strongest national team in the world. The cup was then raised to heaven by the celestial albicelesti. A result that EA SPORTS itself predicted over a month ago.

On the video itself there is little to say, except that at least Mbappè takes a virtual “revenge” against the Argentine number 10. The model of him in fact replaces that of Kratos, while Messi replaces Baldur. A good choice, given the difference in height between the two characters. The mod is made with great care and the French champion can even ball his opponents, with the ball replacing the Leviathan.

The YouTuber made this mod available on his patreon. The mod was made by users HitmanHimself, Marcos RC, Narknon, Jordan and Darknessvaltier. And what do you think? Tell us in the comments as always. In the meantime, we remind you that i God of War’s Norse realms also had an unexpected visit from Tony Soprano!

God of War is available for PC and PlayStation 4, with a free update for PlayStation 5. God of War Ragnarok is instead available only on the two Sony consoles but, according to the words of Santa Monica Studio, an arrival on PC cannot be excluded.

The Spirit of the Samurai, a metroidvania in ancient Japan: between warrior cats and Oni

Amazon is getting Nanoleaf out much cheaper before Christmas: Lines, Shapes & Co. with a discount of over 30%