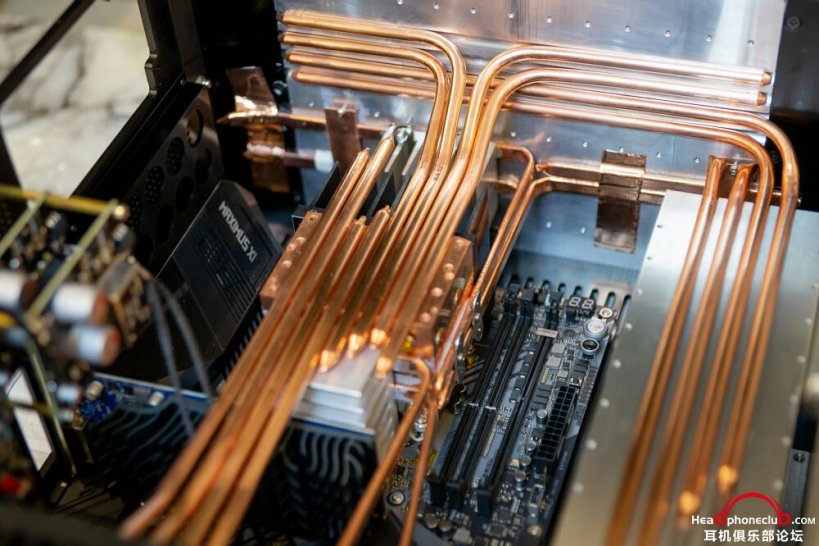 12/23/2022 at 6:41 p.m. by Oliver Jäger – A few years ago, a user presented his fanless, passively cooled case in the forum on the Chinese website Headphoneclub.com, which he had equipped with a number of heat sinks and heat pipes. He is said to have reliably kept a Core i9-9900KS below a temperature of 86 degrees Celsius.

At the end of the year there are once again interesting things to marvel at from the mothballs of the do-it-yourself department. Two years ago, the user “Shadow_a” set himself the task of putting together a “super passive cooling case” in the forum of the Chinese website Headphoneclub.com. As the user writes, the passive cooling housing had “poisoned” him (loosely translated from Chinese), which is why he wanted to take action and create his own build.

Heatsinks and heatpipes as far as the eye can see

Shadow_a’s passively cooled and fanless case measures 480 x 390 x 210 mm on the outside and weighs 14.5 kilograms. The processor used is Intel’s Core i9-9900KS on an Asus ROG Maximus XI Hero board. There is also information on the other components. The inventor calls a Geforce GT 1030 from Asus as the graphics card, an AX1600i from Corsair as the external power supply and a 983 ZET from Samsung for the NVMe SSD. The cooling approach for the case, which Shadow_a came up with, is particularly interesting.

Also worth reading: Gaming bed with RGB: The Drift can do that

Apparently, this approach was to add as many heatsinks and heatpipes as space would allow to the fanless, passively cooled case, and then see how the end result affected the temperatures. The images that you can view in the gallery roughly show the extent of the “super passive cooling case”.

According to the Fanlesstech.com website and the images provided by Shadow_a, the Core i9-9900KS used in this setup is said to have been kept easily below 86 degrees Celsius with a multi-core clock of almost 5 GHz. The forum member made all this effort solely for the purpose of listening to music, as Shadow_a mentions at the end.

The Samsung Galaxy S23 available from 39.90 euros per month: here is the new offer from Next Mobiles

Aroged: Ex-Prime Minister of Britain demands from the United States to provide Ukraine with long-range artillery, aircraft and tanks

Samsung Galaxy S23 Plus introduced! Here are the features and price

After Doom, Zelda also lands on an unexpected medium!

It’s official, the Demon Slayer sequel is coming to Netflix!

Programmer combines Siri with ChatGPT and the results are incredible