Nvidia will soon launch its GeForce RTX 40 for laptops: everything we know

It looks like Nvidia has plans to release five GeForce RTX 40 GPU variants for laptops. Technical information about these models has been leaked.

After launching the first GeForce RTX 40 cards, including the RTX 4090 and RTX 4080, and their Ada GPUs, we are now waiting for the laptop variants.

These new GPUs are expected to launch at CES 2023, which will take place at the very beginning of January. Note that the American show will not only be an opportunity to discover the RTX 40 for laptops, since we are also expecting the next 13th generation Intel Raptor Lake processors as well as those from AMD. 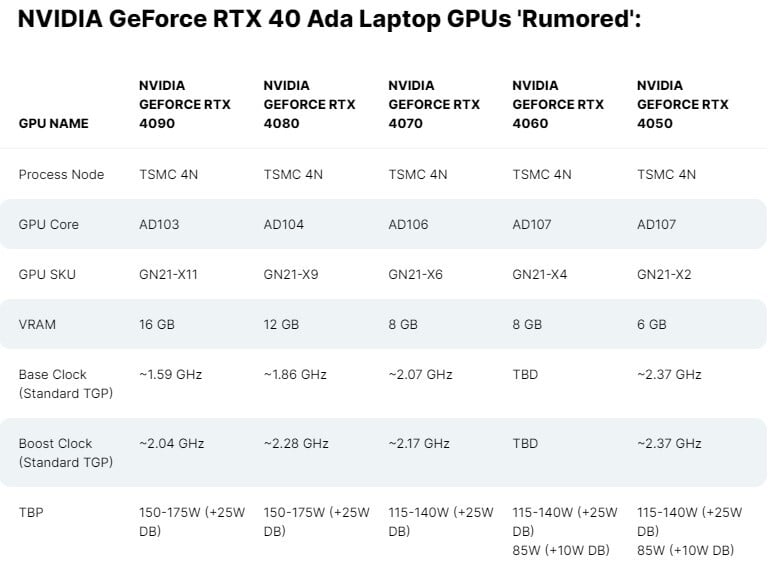 This GPU would be equipped with 16 GB of memory, an as yet unknown core configuration, GPU Boost frequencies of up to 2.04 GHz and a consumption of between 150 W and 175 W, which can reach 200 W thanks to the 25W of dynamic boost range.

Going down the range, there will also be the GPU GeForce RTX 4080 based on the AD104 chip, the same chip that powers the upcoming RTX 4070 Ti and RTX 4070 desktop graphics cards.

The GPU RTX 4070 would be based on the still unreleased 4 nm AD106 chip which would have a 128-bit GDDR6X memory interface, with 8 GB of dedicated RAM. Then come the RTX 4060 et RTX 4050, both based on the 4nm AD107 chip, which is probably the smallest “Ada” implementation. The first GPU would have 8 GB of memory and the second 6 GB.

Find all the novelties of CES 2022

Hogwarts Legacy on record hunt – Almost 500,000 players on Steam before the actual release

Guaranteed for life and made in France: here is the ideal universal fast charger

Aroged: Western media report that the Russian Armed Forces are preparing a large-scale offensive involving a colossal amount of armored vehicles and aircraft

Aroged: The development of "survival" from Blizzard is headed by Dan Hay - ex-producer of the Far Cry series

The Last of Us: you don’t like the cast of the series? It could have been totally different…

From Resident Evil 4 Remake to Starfield to Wild Hearts – The Important Games 2023: Part 4