A lot has happened in the world of Magic: The Gathering this year! In addition to many new sets such as the War of the Brothers set, the iconic card game is also celebrating its 30th birthday. In the past few years, Magic developers have tried some new things. Among other things, they have released special crossover cards. However, not all fans like these cards.

Now that an eventful year has come to an end, we had the chance to sit down with Max McCall, a developer of Magic: The Gathering, to review the year and ask him questions.

First, we had a few questions about the current War of the Brothers standard set. We were able to present the set and an exclusive preview card to you here. The set offers many powerful artifact creatures. As a special gimmick, some boosters also contain Transformers cards such as the famous Optimus Prime. What is also special about the set is that the players do not get to know a new world. Instead, they can relive a defining moment in Magic’s history. War of the Brothers is therefore the first “Event Set”.

buffed: Hello Max McCall! Let’s start with a very personal question: what’s your favorite card from War of the Brothers? And why? 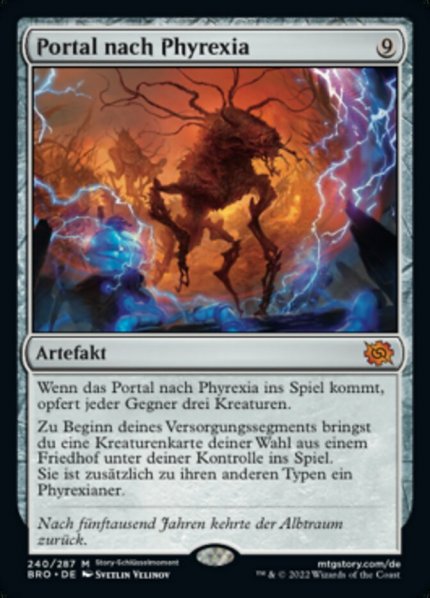 Portal to Phyrexia is Max McCall’s favorite card from War of the Brothers. Source: Wizards of the Coast Max McCall: I’m obsessed with Portal to Phyrexia. Because I’m a monster, and I play Daretti the Scrapmaster in Commander decks for the sole purpose of destroying everyone else’s toys.

buffed: Oh dear. When you’re not making your fellow players cry or swear at a cozy Commander game, you’re designing new sets for Magic: The Gathering. Now, War of the Brothers is something new for players as the first event set. Was it also to design differently as a developer? Were there any particular challenges?

Max McCall: Oh yes, the big challenge with Brothers War was to tell the story of Urza and Mishra in a way that players who had never heard of either brother would be interested in the set. It was also important to stay true to the old storylines while also bringing them up to date. We wanted to make sure the story didn’t turn into a classic good versus evil story. The set is much more about the nature of war and the dangers of pride and obsession. The story of War of the Brothers also spans decades, which is challenging in a Magic set where you’re encountering cards years apart in time.

buffed: Will we get more event sets like this in the future? We know you can’t say anything concrete yet. Now, for someone who isn’t that well versed in Magic history, which events do you personally think would be worth making your own set for?

Max McCall: Elesh Norn is always making plans. I think if she attacked, let’s say, the entire multiverse, then that would be an event that we would develop a set for.

This is Max McCall’s allusion to the next Magic set, which is already in the starting blocks and will be released on February 10, 2023. The set “Phyrexia: Everything becomes one” ties in with the events of the last sets. The Planeswalkers couldn’t stop the Phyrexians on Dominaria. Now the Phyrexians – led by Elesh Norn – plan to invade every single world in the multiverse.

Max McCall didn’t want to give us any more information about “Phyrexia: Everything becomes one”.

The future of Universes Beyond 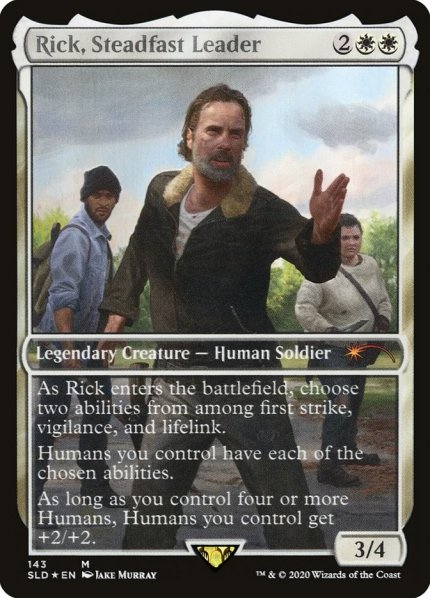 This expensive card turned out to be particularly powerful, which annoyed many players. Source: Wizards of the Coast For some time now, Magic: The Gathering has had crossover cards to other franchises. In War of the Brothers you can find a Transformers card in the card packs with a bit of luck. But there have also been Commander decks with characters from Warhammer 40k. A Lord of the Rings set is planned for 2023. And there were Secret Lair sets (these are special sets with few cards but high prices for die-hard collectors) for Fortnite, Street Fighter, League of Legends or The Walking Dead.

Many players were particularly upset with The Walking Dead Set because the exclusive cards are very powerful and the purchase felt obligatory in order to be able to keep up in tournaments. So we wanted to hear Max McCall’s take on the matter: How do you allow fans of the franchises to enjoy crossovers while not alienating players who don’t like crossovers?

Max McCall: Magic is a game for everyone, and we make sets for everyone. Your favorite set could be about giant robots and artifacts, or a world inspired by a magical cyberpunk version of Japan. Some people’s favorite sets are crossovers between Magic and another world they love. We will continue to make sets for all of these people.

What we fear most is making Universes Beyond sets that fans of the franchise won’t like. We don’t want to make a set that has the people who are most excited about the intersection of Magic and their other favorite pastime responding with, “Oh… they don’t really get me.”

To prevent this, we only made crossover sets with worlds where we have big fans in our own ranks – that is, in the Magic development team. The Lord of the Rings team grew up reading these books. The Warhammer 40,000 team was obsessed with making as much deep overlap as possible. We turned down partners because we didn’t have anyone internally that we felt could do the crossover justice.

2022 is a special year for the Magic: The Gathering team as the iconic card game turns 30. That’s a good reason to review the time and ask a few development questions.

buffed: We’re already looking back on 30 years of Magic. How do you ensure that there’s always something new to discover for players who’ve been playing Magic since the early days, while also allowing newcomers a lower barrier to entry and not being overwhelmed by 30 years of history? 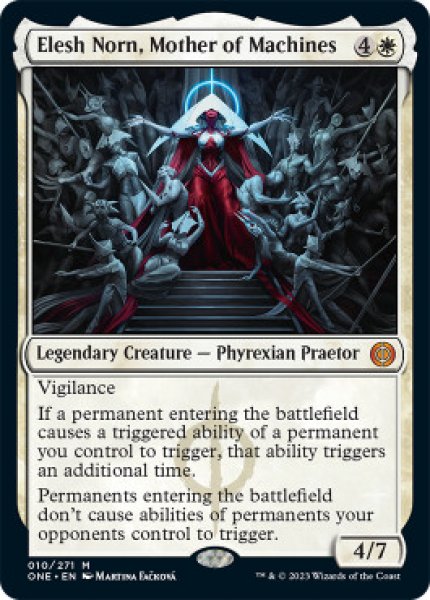 The first preview card from the new set shows the popular Elesh Norn in a new guise. Source: Wizards of the Coast Max McCall: Part of the beauty of Magic is the joy of unexpected interactions between cards. Each new set is a new canvas for all the cards that came before; there will always be new decks to build. New players typically face the opposite problem: deck building is challenging for new Magic players. That’s why Jumpstart is so great for these players. With Jumpstart, you can use two packs to create a fun, charming deck that’s ready to play. One day you might be particularly fond of your detective cat deck and check out what other cats are in Magic, which can be your gateway into the broader deck building world.

buffed: Will there be more jumpstart sets now?

Max McCall: We released special jumpstart boosters for Brotherhood War and Dominaria’s League. We call this “Set Jumpstart”. This is a special way to get into and learn about a particular set. All cards in Jumpstart: Brothers’ War are exclusively from the Brothers’ War set. This makes it easy to dive into and get to know a set. The next two standard sets will also have these set jumpstart boosters in addition to the normal boosters. 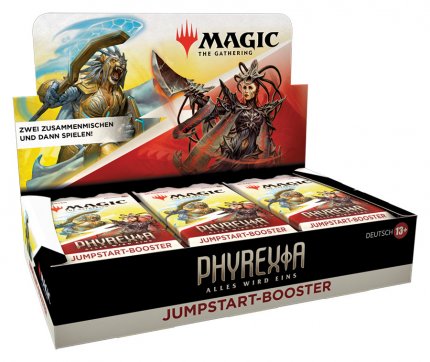 From Max McCall’s point of view, jumpstart sets are a great way to introduce yourself to the world of Magic. Source: Wizards of the Coast Then there’s the regular Jumpstart 2022. This is a little different. It draws on cards from throughout Magic’s history. That means Jumpstart 2022 has a lot more variety in its themes and has a lot more replay value than Set Jumpstart. Jumpstart 2022 is best if you’re looking for a fast-paced game with themes from across Magic’s history, and Set Jumpstart is best if you’re looking to quickly learn about a specific set.

buffed: Back to the anniversary: ​​30 years of Magic – amazing! In the beginning, no one would have guessed that a card game could fascinate thousands of players for decades. But today’s game is very different from the game back then. Which changes do you like the most? And what was better in the past?

buffed: I look forward to another 30 years of Magic: The Gathering! But what will Magic look like in 2052? What are your goals for Magic that you might even want to achieve in the years to come?

Max McCall: My hope is that the next 30 years will see a new generation of Magic players fall in love with the game and make it as much of their life as I have. We’re working to improve the Magic experience for new players to accommodate this.

buffed: Thanks for the interview!

The War of the Brothers set will be available for Magic: The Gathering on November 18, 2022 – we can exclusively introduce you to one card!

Attention Magic fans, we’re exclusively showing you two cards from the new Un-Set Unfinity! Let yourself be blown out of your shoes!

Now it’s your turn: What are your highlights from the last 30 years of Magic: The Gathering – or do you have so many that you can’t even count them on a dozen hands? How long have you been here? What do you like and dislike about Magic? Tell us in the comments!

This is the best selling smartphone on Amazon in late 2022

Restart of the championship of Belgium. Ghent and Standard parted ways

The creators of The Witcher published a selection of postcards

In a few hours you can be playing World of Warcraft: Dragonflight!