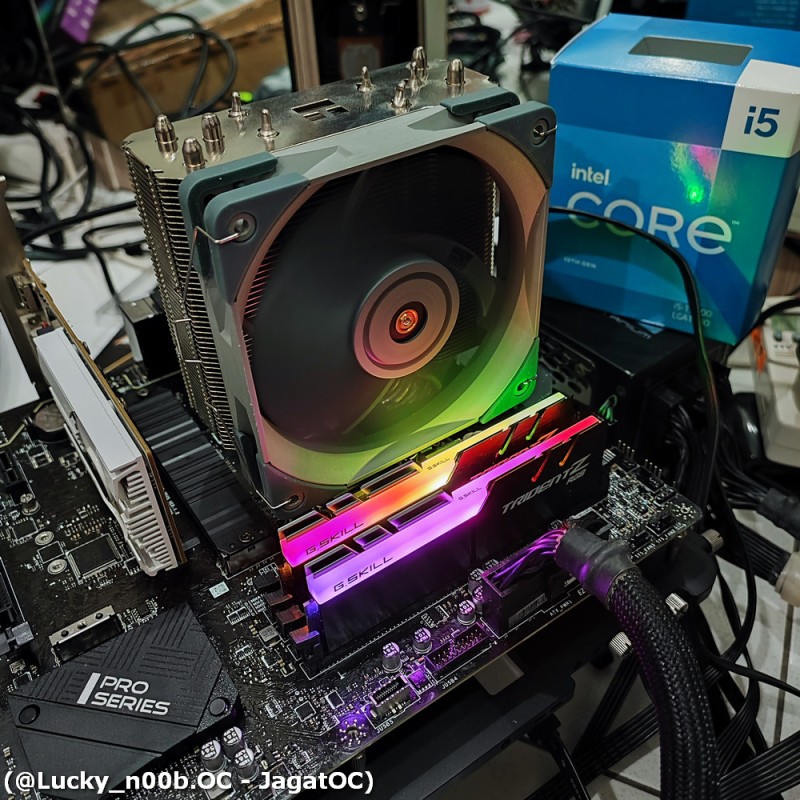 Fresh Intel Core processors on the 13th are starting to appear on the shelves of Asian stores, and now, more than a week before the official release, the well-known overclocker from the JagatOC team Alva “Lucky_n00b” Jonathan bought it for himself, and immediately shared information about his testing.

14 core processor Intel Core i5-13500 provided with 6 productive and 8 efficient cores. This is one of the biggest breakthroughs from the 12th generation series as the predecessor had no efficient cores at all. Interestingly, an enthusiast confirms that this Core i5-13500 can use an Alder Lake C0 die.

The Core i5-13500 processor has a TDP of 65 W, and that power level refers to power limit 1 (PL1), or base processor power as Intel now calls it. However, the processor also supports PL2 or MTP (Max Turbo Power) power 154 W, which can actually be forced into the BIOS of the motherboard. Many of Intel’s existing and future motherboards will offer the ability to extend the period during which the processor will run at maximum power, effectively putting the processor into a higher performance mode for an extended period of time.

Alva says this processor benefits significantly from running at maximum power, with a 1.5GHz difference for all cores running simultaneously under heavy workloads in benchmarks like Cinebench. At 65W TDP, by default, the maximum frequency of all cores is from 2.9 to 3 GHz, but with unlocked TDP, it increases to 4.5 GHz for all cores. This applies to performance cores, of course, but efficient cores also get a higher frequency, from 2.9GHz to 3.5GHz, according to the data.

A processor running in full-core mode at 4.5 GHz is said to almost reach processor-level multi-core performance Core i7-12700K, while in 65W mode it almost matches the i5-12600K (both tested in Cinebench R23). However, the unlocked power mode means that the boxed cooler is not enough and it is not recommended to replace it.

Certain notes have been extracted from the Core i5-13500 brief:

Performance tested on MSI PRO Z690-A DDR4 (1.90 BIOS) and GSkill TridentZ RGB DDR4-3600 2x16GB. Based on the L2 cache, it looks like an Alder Lake C0 processor with 2 fewer P-Cores. The default power configuration is 65W PL1 / 154W PL2. Increasing PL1 from default 65W to max/unlimited mode will result in a significant increase in clock speed. The maximum clock speed of 1 core is 4.8 GHz (P-Core). Constant clock speed of all cores in 65W mode default 2.9-3GHz P-Core, 2.9GHz E-Core. Constant clock speed of all cores at max/unlimited PL1 4.5GHz P-Core, 3.5GHz E-Core. The default 65W mode may be possible for stock cooler (temperatures may be higher only for starter package up to 130W). PL1 Unlimited/Maximum Wattage NOT RECOMMENDED for stock cooler (will easily reach TJMax) 65W multi-core processor almost matches i5-12600K in Cinebench R23. The maximum/unlimited multi-core power is just below the i7-12700K. Single core processor close to i5-12600K.

Pretty decent overall performance. Might work on a cheap/inexpensive H610 board, but make sure the power is 65W and not the max. Recommended for pairing with a mid-range B660 and a decent 120mm HSF tower cooler (such as the Thermalright TA120 EX or ID-Cooling SE-224XT), max power limiting the board to get optimal multi-core performance. Now I’m not sure if the i5-13600K is my best processor of the year, this i5-13500 processor might have the best multi-core performance on the dollar. PS: CPU purchased from a retail store, not a technical sample, all work with a public BIOS.

Alva claims that he bought the processor for only $270. The processor is also confirmed to have a maximum 1-core power of 4.8 GHz, so now there is new data on this.

Metro Last Light Redux FREE for one day only on the Epic Games Store!

A PHOTO. The Dutch team went to sea