How do cameras on police uniforms work?

Despite being a company with almost 30 years of existence, Axon started to become popular in Brazil about two years ago. Responsible for supplying body cameras to public safety entities such as the São Paulo Military Police, the brand found itself in the middle of political discussions when the subject became an agenda in debates for the government.

Even the elected governor himself, Tarcísio de Freitas (Republicans), went so far as to say that he would “certainly” remove the police bodycams. “What does the camera represent? It is a situation that puts the police at a disadvantage in relation to the bandits”, he claimed in an interview with Jovem Pan, during the campaign. 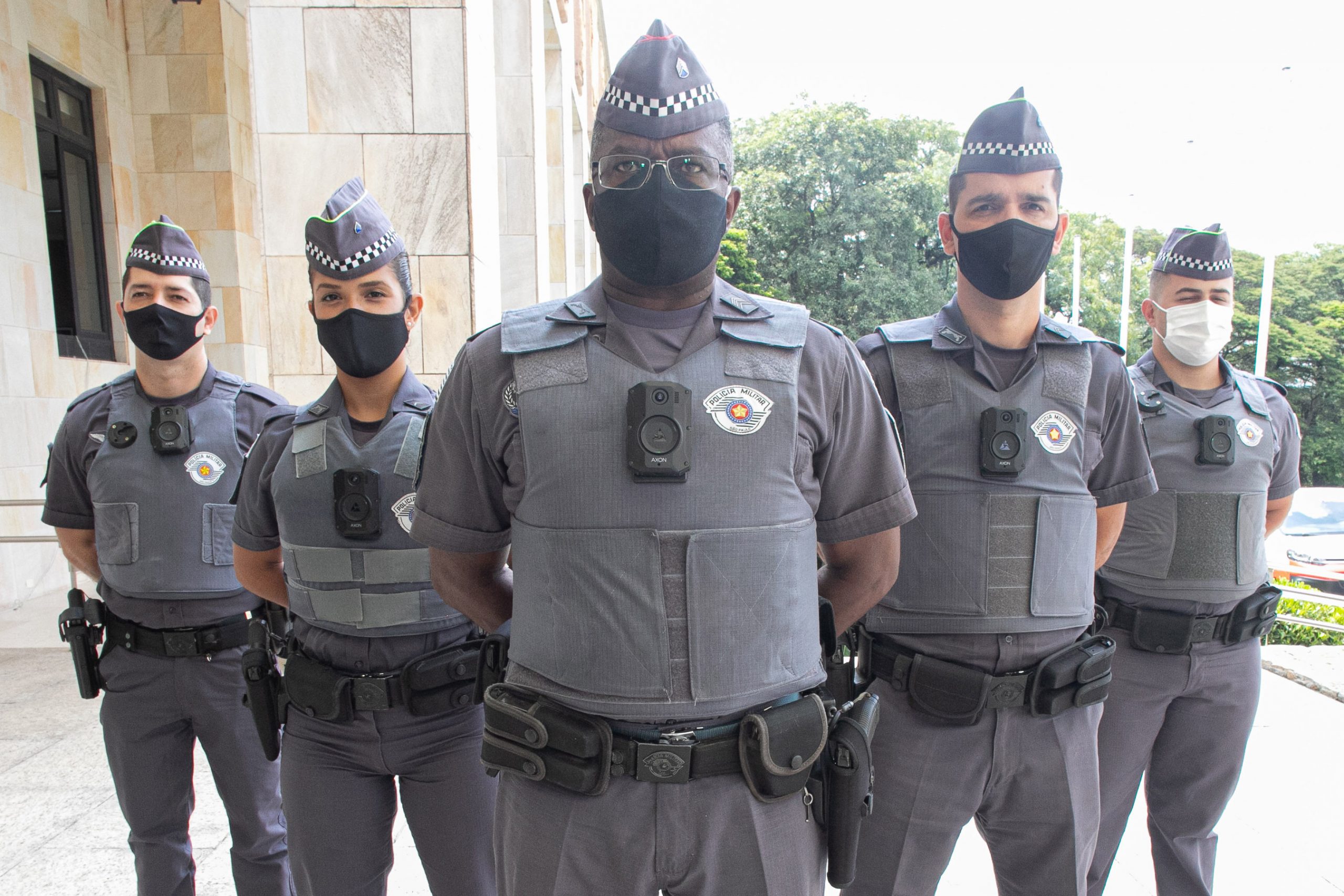 After being elected, Tarcísio backed down and promised to keep the policy. “The camera issue, I was more critical in the campaign, now let’s hold on. Let’s keep. Let’s see the result and what adjustments we can make ”, he pointed out to CNN.

The fact is that, according to a survey by the Getulio Vargas Foundation (FGV), the so-called Portable Operational Cameras (COPs) reduced by 57% the number of Deaths Due to Police Intervention (MDIP) in the area of ​​police units that use the technology, in comparison with the average of the previous period before the implantation of the equipment, in the case of the Military Police of São Paulo.

Also according to the FGV, 104 deaths were avoided and there was a 63% drop in the total number of incidents in the first 14 months of using the technology. 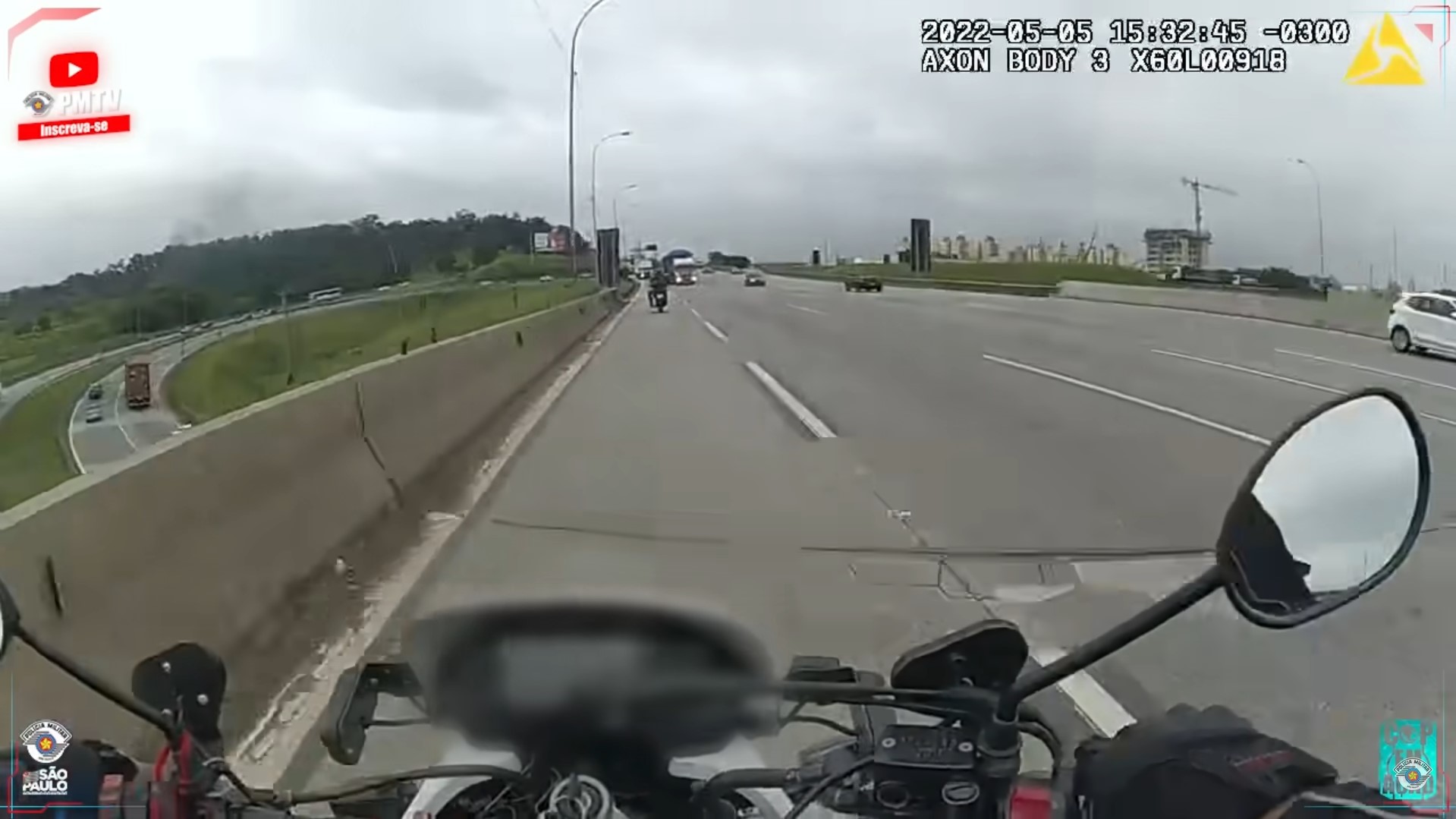 O TechWorld spoke with Arthur Bernardes, senior account manager at Axon in Brazil, who defended that the bodycam is a kind of “witness carried in the chest”.

“Everyone has a cell phone in their pocket, which in a way is a camera, and they can record police action. But the fact is, the police side is never exposed. So body camera does just that. It is to give the version of the facts of the most important actor of that interaction, that is, to show the perspective of the intense events that the police participate”, he defends.

How does the PM camera work?

A PM from SP uses the Axon Body 3 model, which is used by around 7,000 police officers around the world. It was adopted in the “Olho Vivo” project, developed by the São Paulo security entity in 2021. The idea was precisely to offer guarantees to both agents and the population.

The Axon Body 3 offers up to 1080p video resolution, up to 12 hours of battery life, 64GB of storage, is IP67 rated (protects against dust and is resistant to a dip in water up to 1 meter deep), multi-channel audio -mic, live maps, LTE and more. Coming soon, technology is yet to gain Wi-Fi connectionwhich will be used in places where mobile network coverage is precarious.

Bernardes explains that all configuration and camera activation parameters are defined by the institution that contracted the service. In the case of the PM of SP, the camera is turned on when the police officer goes to answer a report sent by the Military Police Operations Center (COPOM)🇧🇷 The institution also standardized that recordings should occur when there are approaches that require the use of force. All footage is classified and goes to other platforms that support the functioning of the cameras. 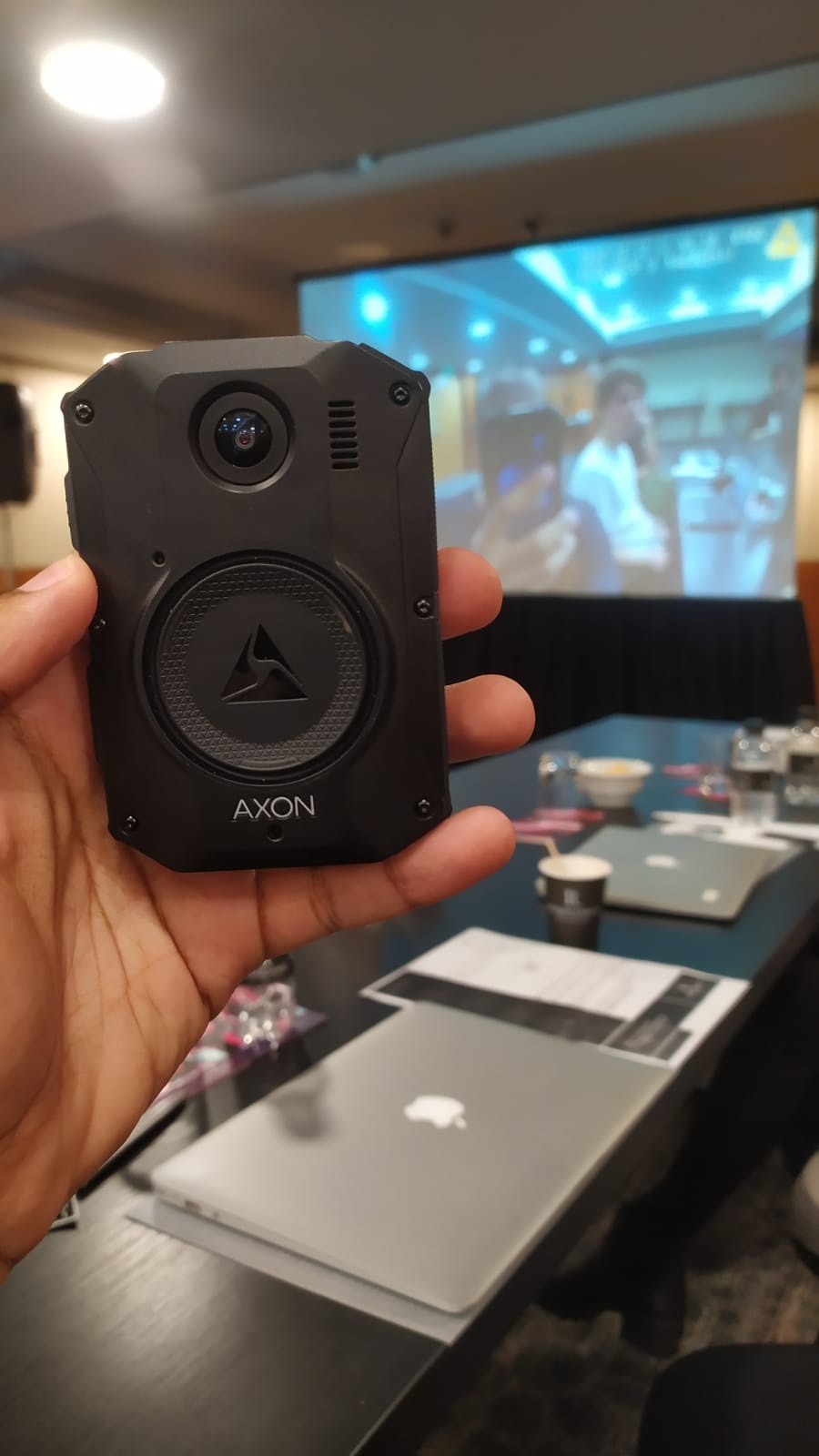 Axon held a demonstration of its equipment, such as the Axon Body 3 (pictured), for journalists. (Source: Carlos Palmeira/TecMundo)

One of the systems is Axon Evidence, a cloud-based structure that stores all captured audio and video material. Being protected by cryptography, the platform performs a complete control of the data (even indicating if any video was shared without authorization, allowing the search for videos by date, name of the police officer, location and dozens of other parameters) and because of that it serves as a legal material in cases that are prosecuted.

there is also the Axon Respond, which combines sensors to trigger command teams in more delicate situations, such as an exchange of fire or pursuit, for example. With Respond, it is possible to know where the patrol officers are and to expedite the dispatch of reinforcements.

“Cameras are like car insurance. You don’t expect to crash the car, but if you do, he’s there to protect you. The police officer does not expect to get into a confrontation, but if it does, he is protected by the recordings”, adds Bernardes when asked about security agents who do not see Axon Body 3 with “good eyes”.

The PM of São Paulo has even taken advantage of the videos captured during the actions and used them as informative and entertainment content. The entity’s YouTube channel already has more than 800 thousand subscribers and has publications with more than 41 million views. Below is an example of a police action recorded by Axon Body 3 that was transformed into content on YouTube:

The future of security forces

Axon’s product catalog is made up of several other products such as the Taser, a non-lethal electroshock weapon that popularized the brand around the world. Currently, the equipment is in its seventh version and has the short-distance shock and also the shooting of electricity darts that paralyze the affected body region.

The Taser 7 even has a rechargeable battery, mobile app for inventory management, automatic firmware update, natural green laser in sight and more.

Among the products of the American brand are the Axon Air, an integrated drone platform for public safety. In addition to live wireless streaming of risk situations, the solution provides evidence (with Axon Evidence) and data management. 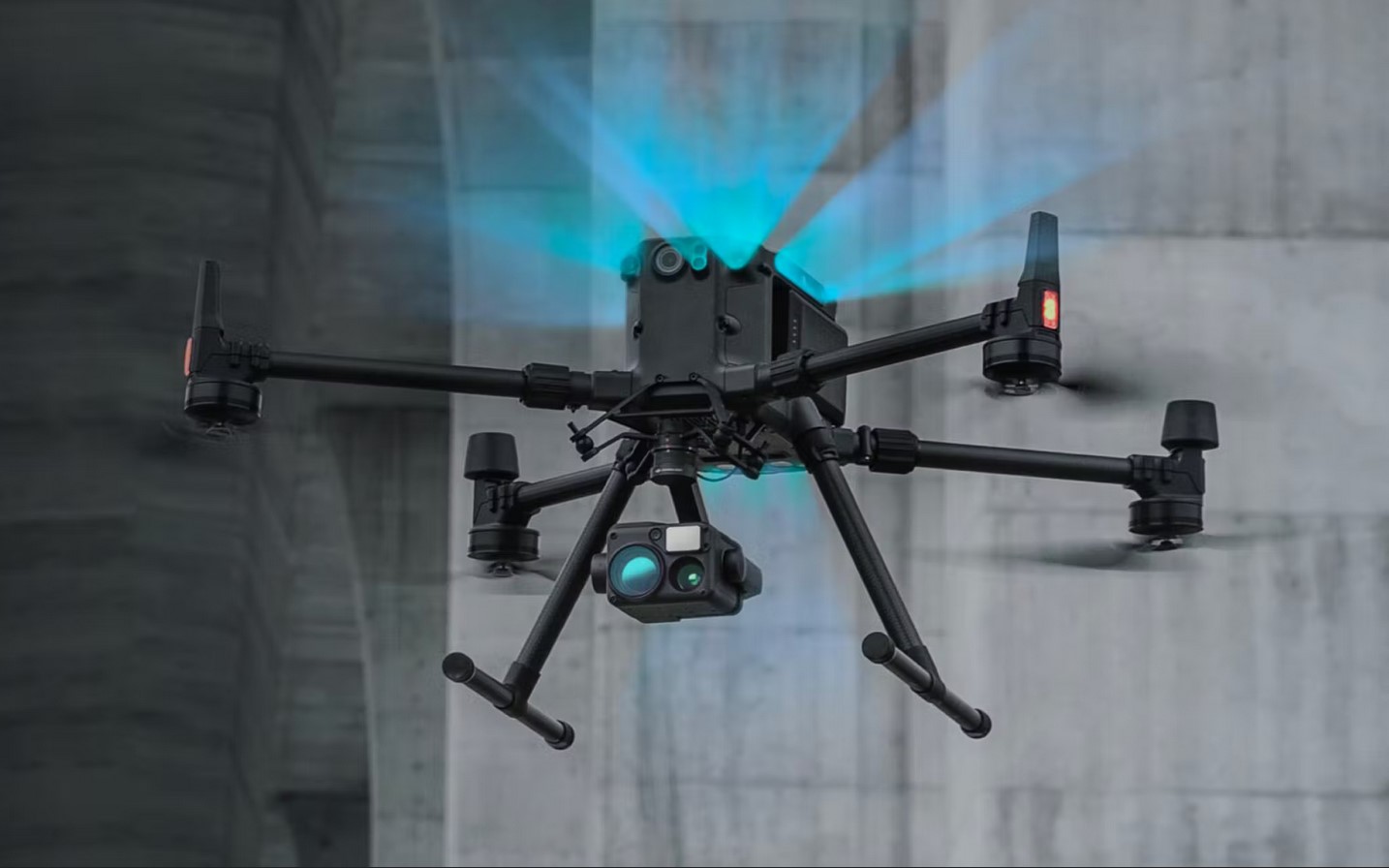 Drones are already part of security forces around the world. (Source: Axon/Disclosure)

Bernardes argues that flying equipment could be the future of security forces. In a scenario where there is a more prepared infrastructure of docks — where drones can land and recharge — they may work as an alternative.

“Drones give great flexibility in terms of range and reaction time, as they are a kind of advanced lens of special activity in cases where you need to intervene or where you need to see what is happening. In cases of a very large traffic jam, they can be sent as a first response”, he exemplifies.

Bernardes does not rule out that Axon will offer both the government of São Paulo and other states products such as the taser and Axon Air from next year. However, he points out that at this moment there are no conversations with public agents due to the transition period, since most states in the country will change governors starting in January.

Check below the entities in the country that already use Axon solutions:

O TechWorld contacted the Public Security Secretariat of São Paulo (SSP-SP) and asked for an assessment of the police officers’ body cameras. In a note, the entity explained that after the implementation of the bodycams police lethality dropped 65.6% in units that adopted body cameras.

“On-duty police deaths also dropped from 14 to 4. Arrests in the act increased by 41% and gun seizures grew by 13% in the 60 battalions and four police training units that use the 10.1 cameras,” added the SSP -SP.

The folder also informed that it performs a investment of BRL 7.1 million per month with the solution🇧🇷 In addition to equipment, the budget covers the storage of videos in the cloud. 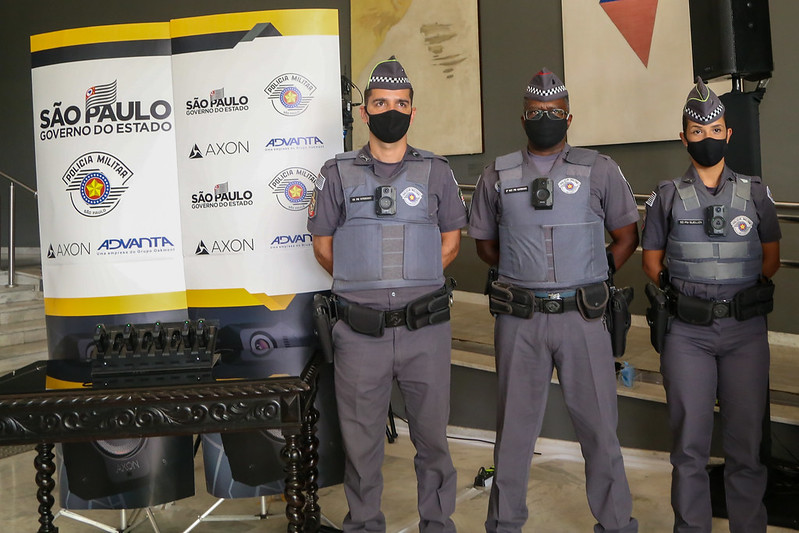 Act in February 2021 marked the acquisition of more than 2 thousand body cameras from PMESP. (Source: Government of the State of São Paulo/Disclosure)

Finally, the secretariat cited the FGV survey that “proved that police productivity has grown in these units, with a greater record of police actions to curb violence against women, among other crimes”.

Disaster Band – you have no plan of music? Then you’ve come to the right place!