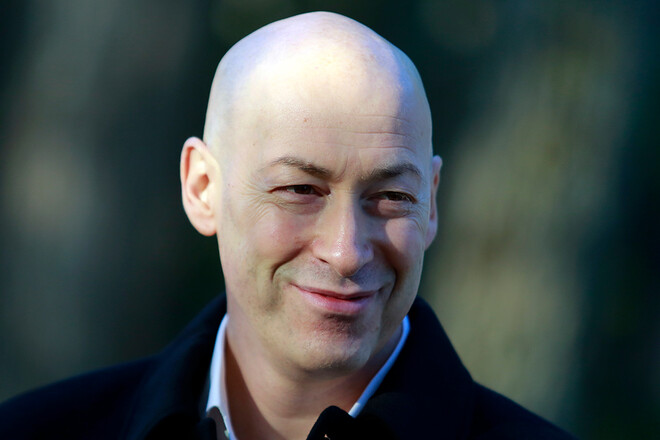 Ukrainian journalist and TV presenter Dmitry Gordon continues to criticize the president of the football club “Ingulets” Alexander Povoroznyukwho called him an FSB agent in an interview:

“I think that he has already moved his brains, if he ever had them there at all … He sometimes throws me some messages, but they are as stupid as Povoroznyuk himself. Bad ass, what else can I say. I repeat that I will ruin his reputation or what he has instead of it. Because this asshole, this real cattle from the 90s, compromises the whole idea of ​​\u200b\u200bthe defense of Ukraine, the idea of ​​​​nobility, the idea of ​​\u200b\u200bthe military. But how could this brute, having bought himself the rank of some Cossack general, draw a portrait of himself in the uniform of a general, in uniform …

Take a picture during the war against the background of this portrait, so that everyone can see it? People shed blood at the front, and this brute is stupid, photographed in general uniform, not being a general. Then he records a video and says that he is “the general of the Cossack troops.” He tries so hard to say it in Ukrainian… He knows the Ukrainian language just like the natives in Papua New Guinea. He says: “otse bulo in January, otse bulo in December, otse bulo in February.” Pure parody, ugly, impudent… Redneck, just redneck. You know that we are now conducting a large journalistic investigation. We dug up his whole life, from birth to. It will be very interesting.

He still, such a ploy, compromises the president, begins to lick him to an indecent state. The president’s office is already annoyed by his behavior, by the fact that he equates himself with the president. He talks about him all the time so that people get the impression that the president is his roof, that they are friends. Such a small, stupid, ugly bastard, also a liar. Why did I get excited about him at all, it’s not actually for me to get excited at someone (laughs – ed.). I was aroused by a lie, when a person with such a frill goes on air, in military uniform, not being a military man and not even standing next to them, begins to tell that I am the owner of an apartment in Moscow and an FSB agent, then of course I have a desire to punish him.

Well, you can’t lie like that shamelessly, this is a shameless story, because there will surely be people who will believe in this nonsense. Therefore, this toad will get what he deserves, so that other toads would be discouraged. I’ll work out the scheme on it, so when the next toad pops out, the next toad got hit on the head, it’s just that Povoroznyuk is my guinea pig.

He had a defender there. Well, no one wants to sit next to Povoroznyuk so that the shadow of this personality does not fall on normal people. But he found a defender – Serezha Leshchenko. He is a former journalist, now a railroad worker. So I want to warn Serezha Leshchenko, so that he constantly thinks about the fact that he carries his dirty, smelly mouth. Taking this opportunity, this is a mine face – I warn you.

Earlier, Gordon “soaked” Povoroznyuk for posing in front of his portrait.

“Congratulations on your Premier League debut!” The miner dedicated a short tweet to Mudrik

Call of Duty Modern Warfare 2: The Breenbergh Hotel map soon to be removed? The answer would have fallen!