Only those who go into battle well informed have a chance of emerging victorious from the carnage. Nadia, Castiel and Arianna have been following this motto in our D&D campaign Shattered Worlds for quite some time now. So they try to gather as much information about the feathered ogre as they can in preparation for their planned raid on the harpy lair in the jungle. In the course of their research, however, they uncovered a piece of information that they wished they had done without…

A fish is needed! After Nadia, Castiel and Arianna caught a really big fish (of course Castiel had to act as live bait once again) they brought it to the hermit Tyann Bloodsworn in the jungle. He led the adventurers to a suitable spot by a pond and set up a net trap for hungry harpies. The group’s plan was as follows: capture a harpy, question it, and bring it to the temple of the Mielikki for further study. After all, they wanted to learn as much as possible about the corruption of blood magic before they faced the harpies in a full-scale attack.

Said and done. Harpy lured, trap snapped, birdie caught. After some highly intimidating words from Castiel (Natural Twenty intimidating!), the harpy was also very cooperative and allowed herself to be led through the jungle while being tied up. Just before the group could reach the end of the jungle, however, two emaciated, sickly harpies attacked them. The fight was short and painless, but as Castiel smashed in the skull of one of them, a goo-brain leapt out on legs, clawing at him and trying to get into Nadia’s mind. An intellect devourer! They also found such a creature in the skull of the second sickly harpy, albeit at an earlier stage of development. The shock of this discovery will stick in the bones of the adventurers for a long time.

After conversations with their captives and investigations in the temple of the nature goddess, the following came out: In the course of the blood magic rituals, a tadpole is used for all initiates, which is supposed to increase their power and give them psi magic. This then slowly develops in the brain into an intellect devourer, consuming the brain and weakening the body. The spell Protection from Good and Evil can banish the aberrations from the minds of their hosts, and they may even survive – as long as there is enough of their own brains left. So the harpies were not supposed to be made more powerful; someone is breeding an army of weak-willed soldiers here! In any case, one thing is clear now: without strong support, Castiel and Co. will not venture into the harpy hoard in the near future…

Two mercenaries for a hallelujah 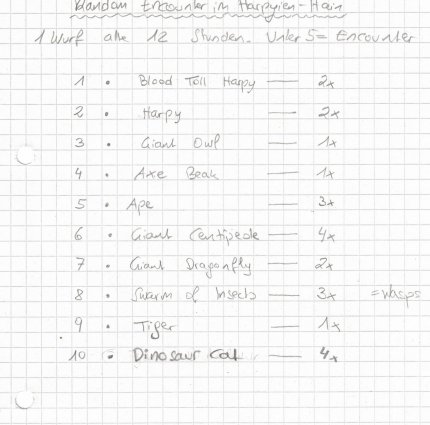 Random Encounter Lists – the perfect tool for any D&D campaign with lots of open world play and exploring dangerous areas. This is a list of various creatures that heroes can encounter in the Ko Rillan jungle. Source: Buffed And that’s a good thing. At level three, the Harpy dungeon is designed for four to five characters, anything below that would be practically suicide. Through their in-game investigations, the heroes now know this too and can prepare accordingly. The residents of the Temple of the Mielikki have given them their full support – and that’s where our mercenary friends come in. Two of our real-life friends who also play D&D have offered to help out with this dilemma. So there’s a good chance we’ll invite them as guest players to fight alongside the heroes in the fight against the infested harpies. It will take at least two sessions to get there, but I’m looking forward to it.

Random encounter in the jungle on Ko Rillan

The fact that the group in this situation was actually, most appropriately, attacked by infested harpies in the end stage is due to coincidence. Not only do I roll for random combat, but also which creatures are attacking. The 25 percent chance of a fight occurs every twelve hours; There are ten different opponents or encounters to choose from. In that case, I asked Sven to roll a d10 to determine the type of encounter. (Of course, he didn’t know what his roll meant, since the relevant list is tucked away on my side of the GM screen.) And he promptly rolled a 1, summoning two Blood Toll Harpies. These are much weaker in terms of their values ​​than normal harpies and do not master the charming harpy song. That’s why I use them as the brain-eaten victims of the intellect devourers. The fact that these harpies attacked for the first time at exactly that time just fitted perfectly into the overall story. 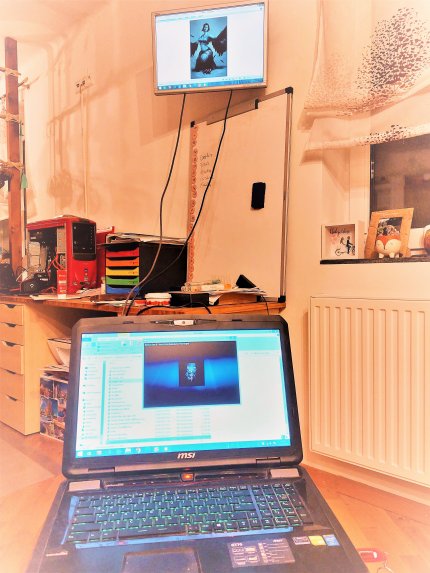 Screen and Initiative Board. Two tools that we’ve come to love. While I mainly have music lists and background information open on my laptop, I can only show the players on the screen what they should see. Source: buffed

Do you use pictures of NPCs, monsters, or locations in addition to your descriptions? I’ve been doing this for a while and I find it works extremely well; people, in particular, are better remembered by the players and it’s easier for me, too, when looking at a picture to remember what that person’s character was like and what voice or accent I used for them. But because it’s extremely annoying to show the players my laptop every time, we mounted a screen on the wall opposite our gaming table specifically for D&D. By the way, the large magnetic board under the screen is our initiative board. For more complex fights, we write initiative lists here so everyone can see exactly when it’s their turn. This has proven particularly useful in the high-level area of ​​the last campaign. With numerous legendary actions, summoned creatures, bosses and common enemies, it was much easier not to lose track this way.

Game of the Year awards have already collected 8 projects from Game Pass, but the main game of the year is Elden Ring

Twitch defines VTubers as artificial intelligences, who feel offended by the combination

Samsung: Next affordable smartphone revealed ahead of imminent launch

The Callisto Protocol, generations compared: PS5 vs PS4 and Xbox Series X vs One