Due to user tracking, DuckDuckGo announced that it will block requests to log in with a Google account 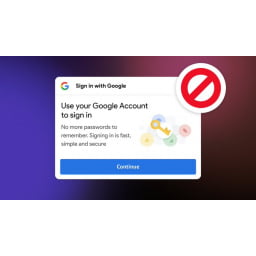 DuckDuckGo, the popular platform that promises privacy to Internet users, has announced that its apps and plugins will now block Google login prompts. DuckDuckGo claims that such pop-ups are annoying and threaten users’ privacy.

DuckDuckGo is known for its privacy-focused browser, email service, and mobile apps that include numerous privacy features and web browser extensions to protect data.

“Have you seen these Google login pop-ups lately? They may seem useful, but opting in actually gives consent to tracking,” DuckDuckGo wrote on Twitter.

Google offers the option to sign in on different websites – users can quickly sign in using their Google account and thus avoid the hassle of creating new accounts and remembering new passwords.

But DuckDuckGo says the downside to that is that Google can actually track the websites and apps users sign in to, even though DuckDuckGo explicitly says that “Sign in with Google data is not used for ads or other non-security purposes.”

In other words, DuckDuckGo believes that Google is still collecting data, which is why the company that promises privacy to users has now decided not to give them the option to log in with a Google account at all. All you need as a user is to have the DuckDuckGo browser extension active and all Google queries will be automatically blocked.

In November, DuckDuckGo enabled Android users to block third-party trackers in all their installed apps. The new version of App Tracking Protection lets Android users see which trackers are blocked and what kind of information they’re targeting. According to DuckDuckGo, Android users have an average of 35 apps installed on their devices. This reportedly generates between 1,000 and 2,000 tracking attempts per day for over 70 companies.

Noctua has released a series of branded fan grills NA-FG1

WoW WotLK Classic: Unbreakable Ulduar Hardmode is now a walk in the park

Nintendo: serious vulnerability in games for Switch, 3DS and Wii U fixed with patches

Call of Duty Black Ops 3 had an Open World single player campaign, here are the images

"The world is so detailed": for some, the visual slap of the year is not Elden Ring, but a PS5 and PS4 exclusive!

GDDR6W for GPUs: Samsung with twice the capacity and bandwidth thanks to new stacking