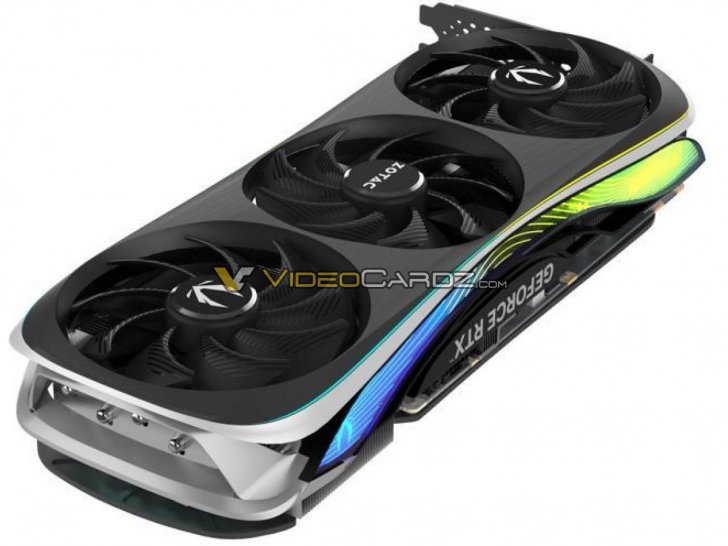 The rumor that Nvidia will probably soon launch the graphics card previously announced as the Geforce RTX 4080 12GB as the Geforce RTX 4070 Ti has probably gotten around by now. Officially, there is little to hear about it, but the corresponding rumors have been increasing for weeks. Even a release date is under discussion: Nvidia is said to want to present the RTX 4070 Ti on January 5th. Appropriately, there was a new load of information over the holidays. Videocardz reports on the first benchmarks and even on custom designs.

The leaked performance data is comparatively official: it does not come from a third party, but was published by the developers of the Octane renderer. The Geforce RTX 4070 Ti is listed on the corresponding website, which supposedly achieves 725 points in the software benchmark. For comparison: The Geforce RTX 4080 scores 930 points, and the old flagship – the Geforce RTX 3090 Ti – scores 689 points.

If you take these performance values ​​as a given, the Geforce RTX 4070 Ti would be a good bit slower than the RTX 4080, but it could still just surpass all models of the previous generation. Of course, this does not have to apply to all disciplines. The rendering benchmark only allows limited conclusions about the gaming performance – and the test conditions with which the performance values ​​were achieved are also unknown.

Unfortunately, further performance values ​​are not yet known for the Geforce RTX 4070 Ti, but there is initial information on corresponding custom designs. At MSI, for example, the first model names were leaked: The website of the Eurasian Economic Union names a total of seven products from the company, which come from three different series. Accordingly, MSI is planning two Gaming Trio and Ventus models each, and there should also be three Suprim graphics cards based on the Geforce RTX 4070 Ti.

Also exciting: How fast could the Geforce RTX 4070 Ti get? Fact check about the former RTX 4080 12GB

At Zotac, on the other hand, a little less selection is planned. Videocardz itself has published the first details here, according to which the company is planning three custom designs based on the Geforce RTX 4070 Ti. Specifically, these should be available as AMP Extreme Airo and as Trinity (OC). The AMP model has a 3.5-slot cooler and the usual 12VHWPR connection, which is supplied via an adapter with three 8-pin connectors.

The Geforce RTX 4070 Ti Trinity (OC), on the other hand, is said to use a 2.5-slot cooler, which only differs in the stickers on the fans. There are also differences in the adapter: The OC model is also powered by three power plugs, while the non-OC graphics card only has two. With this, the TDP is somewhat more limited.

TLOU 3: thought of as a series?

Hogwarts Legacy: fantastic beasts and how to take care of them in the new Vivarium clip

Analysts: popular games and platforms in 2022, comparing the success of gaming companies

Ideal for the PS5, this 1TB M.2 SSD is at its lowest price on Amazon

Another patch for The Witcher 3 on the way, work on it is nearing completion