(Review) KTC G42P5: Personally, I love computers, because it’s a little piece of the technological world where we really are in charge!

After all, from the computer case, to the traditional mouse, or even the desk where we put all our stuff, or the chair where we stick our tail, we are the ones who decide everything that gives life to our setup! All this in order to improve our performance in game, or while we work.

Thus, we can create a computer from a bunch of parts from different brands, with different formats or purposes, and of course, to give life to the thing, we can even add 1, 2, 3 or 4 monitors (or more!), all them the same, or all of them different, to create an authentic Battlestation, or simply be aware of all kinds of information that you need to process in your day to day.

Well, today we are going to look at a product that is born out of all this confusion! An OLED monitor that can do it all! 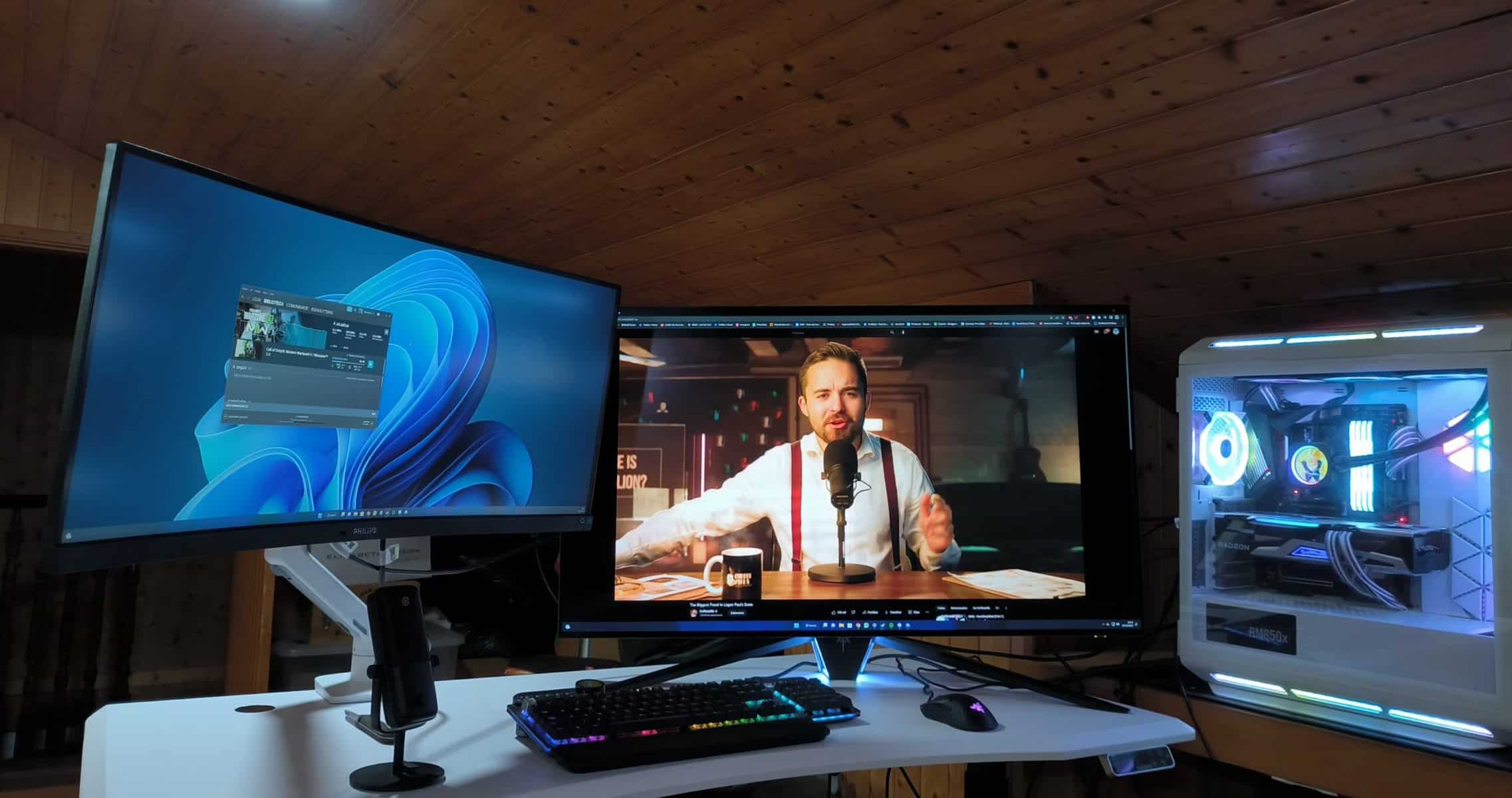 In short, we are talking about a 42” OLED monitor, from an unknown brand, but which has already been on the market for several years as a company focused on the OEM, which has now decided to bet everything it has on the traditional market, and for that reason , despite evading the always expensive certifications, uses the best quality components to produce one of the best monitors we had the opportunity to test at the Leak.pt. 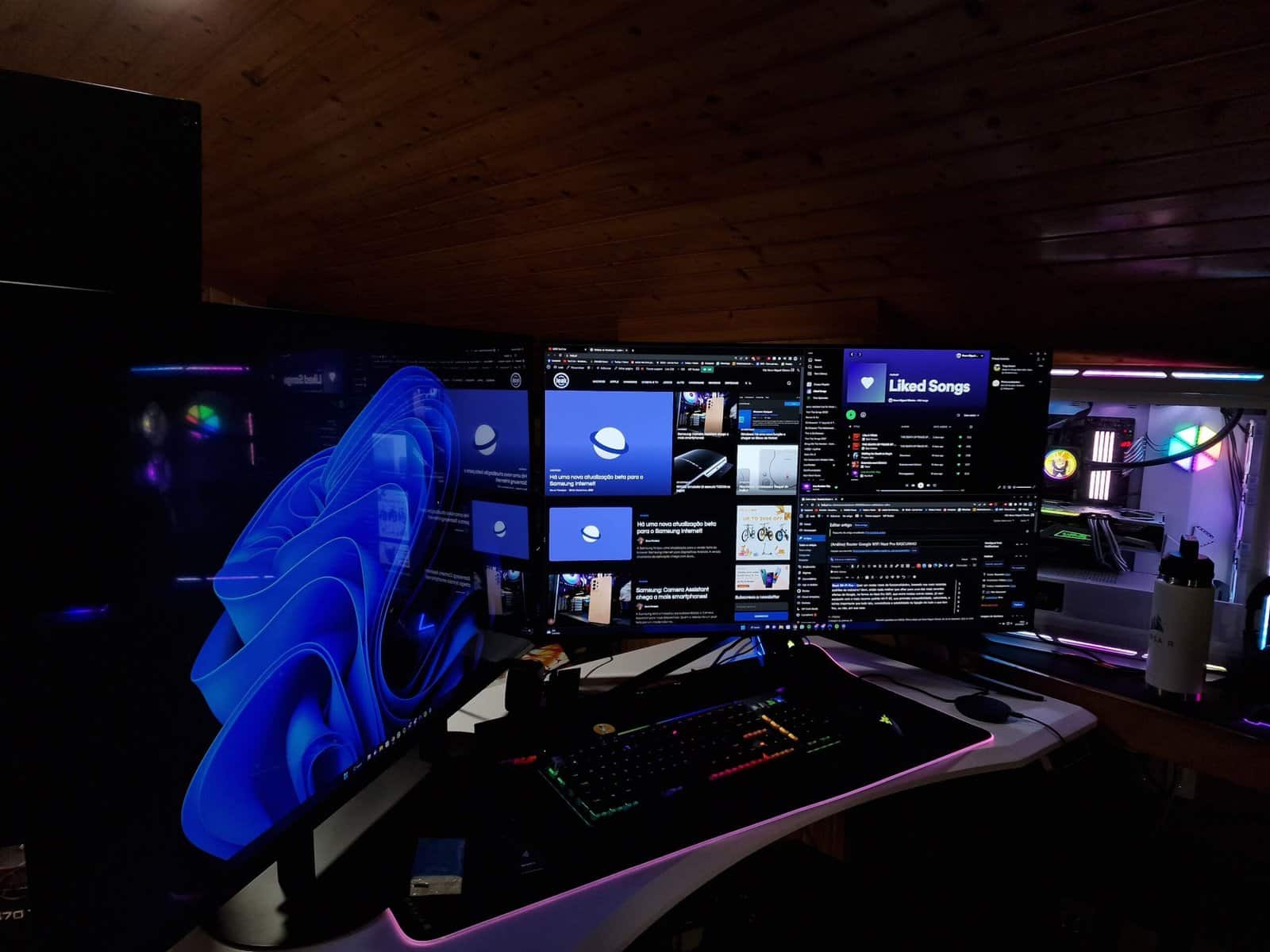 Therefore, the KTC G42P5 is one of the first big bets of the old Chinese OEM KTC, in the European Continent. It is therefore a more wallet-friendly offer, but still equally powerful compared to the increasing number of 42” OLED offers that we can find on the shelves.

First of all, this design might not be for everyone, but personally… Adore! It is undeniable that this monitor is capable of distinguishing itself from many other products, from equally ‘gamer’ brands, with more years on the market, right at first sight.

After all, the whole set is well done, especially when we throw the base with RGB lighting into the mix. One of the most beautiful, best built, and most appealing monitors I’ve had the pleasure of testing and using on my computer and consoles. 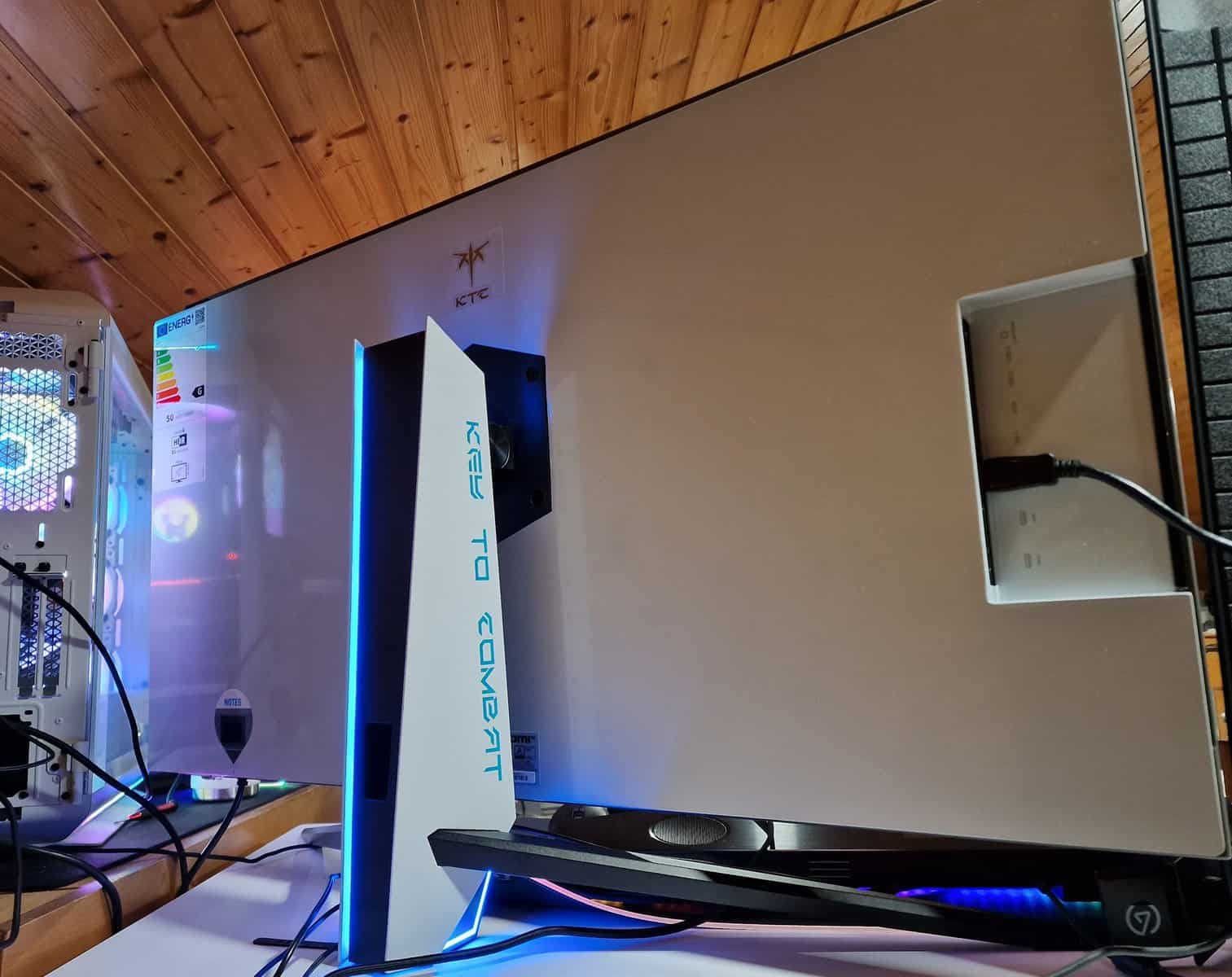 In fact, even in terms of margins, we have a product that is superior to several direct rivals, with no significant margin around the screen itself.

Having said all that, this is a monitor, with a normal TV size. So, to put it in your setup, you’ll always have to make sure you have room to give and sell. Also, it’s a heavy monitor, and big, so when assembling it’s a good idea to ask for help, don’t go messing around or put force on the thinnest parts of the OLED panel. 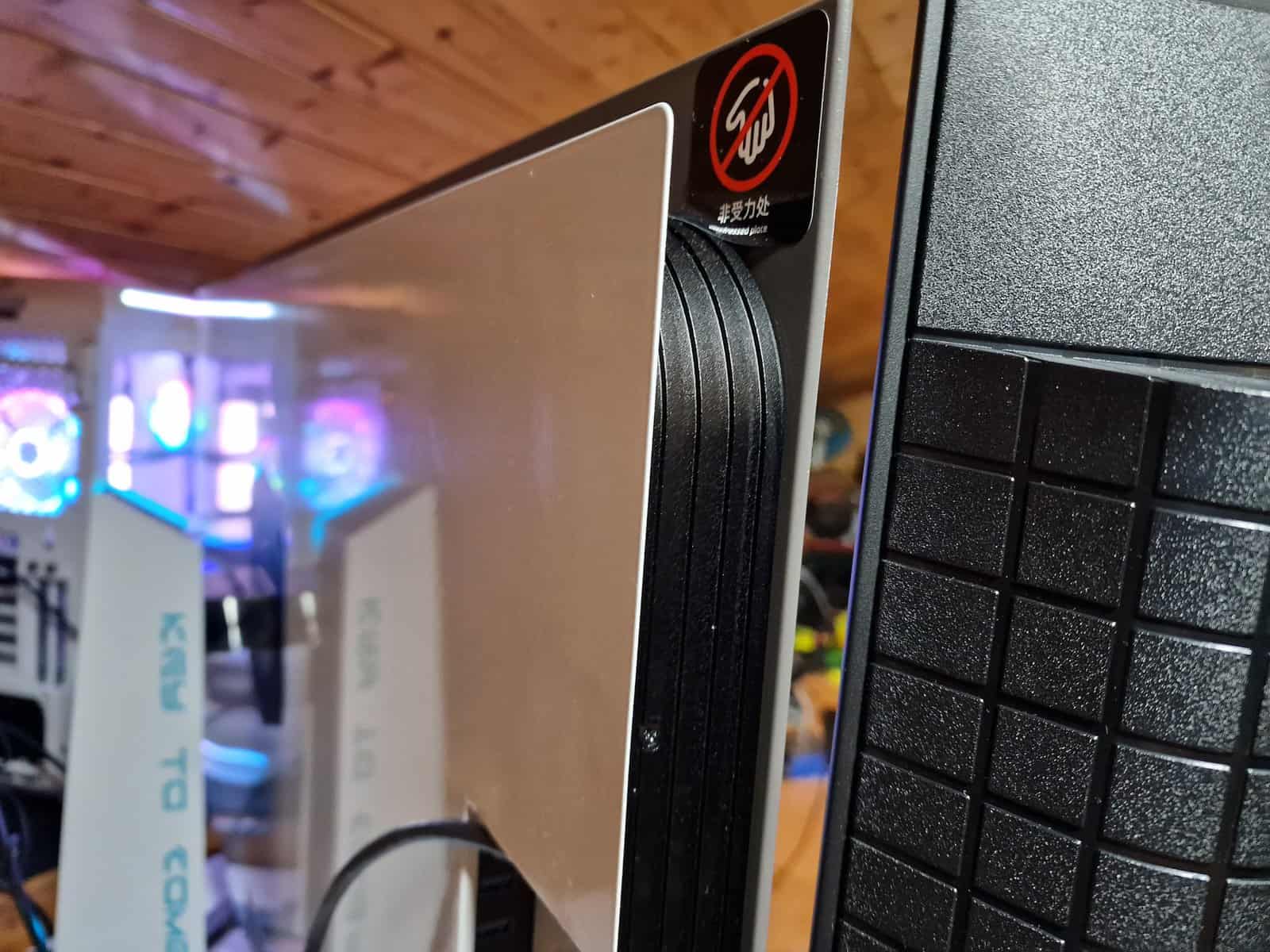 However, in the control part, we have a joystick at the bottom, very similar to what we can find in the vast majority of monitor manufacturers on the market. Well, more or less, is that this OSD menu is one of the simplest, yet complete, that I have had the opportunity to use in my test days.

That said, perhaps more important than anything we’ve already said, is this monitor’s connectivity! 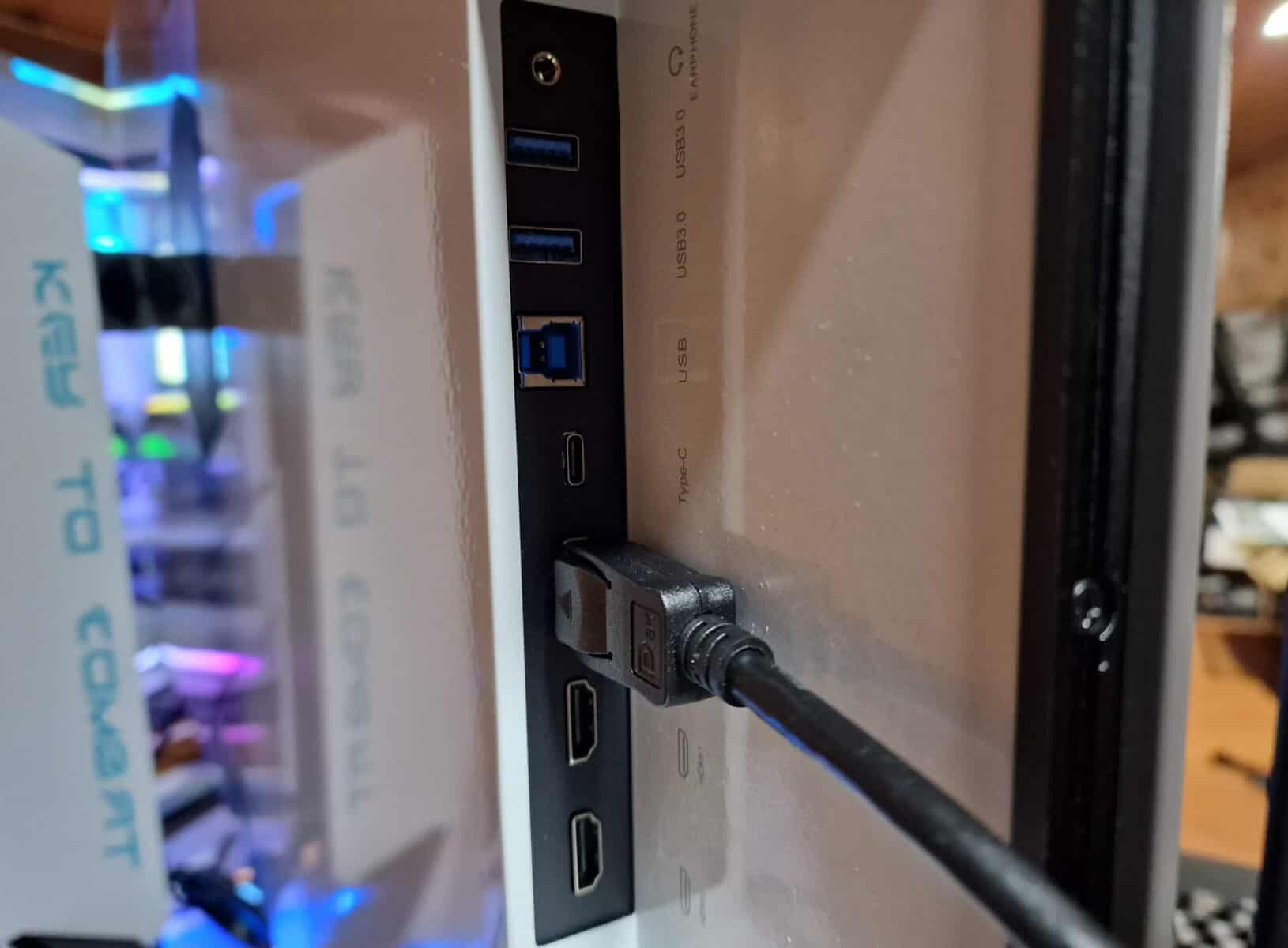 After all, the KTC G42P5 has a DisplayPort input, it has two HDMI 2.1 inputs for new generation consoles, it has USB-C DP with the possibility of charging at 90W, and in addition to all this, it also has two USB 3.0 ports, and a 3.5mm audio jack. One of the most complete and advanced monitors that money can buy in terms of connectivity.

As we said in the specification list, if you don’t want to connect speakers, we have a pair of simple 8W speakers, very similar to what you would find in a commercial TV. They’re not good, they’re not bad, they’re… decent.

Still, much more decent than what is normal in the world of monitors. 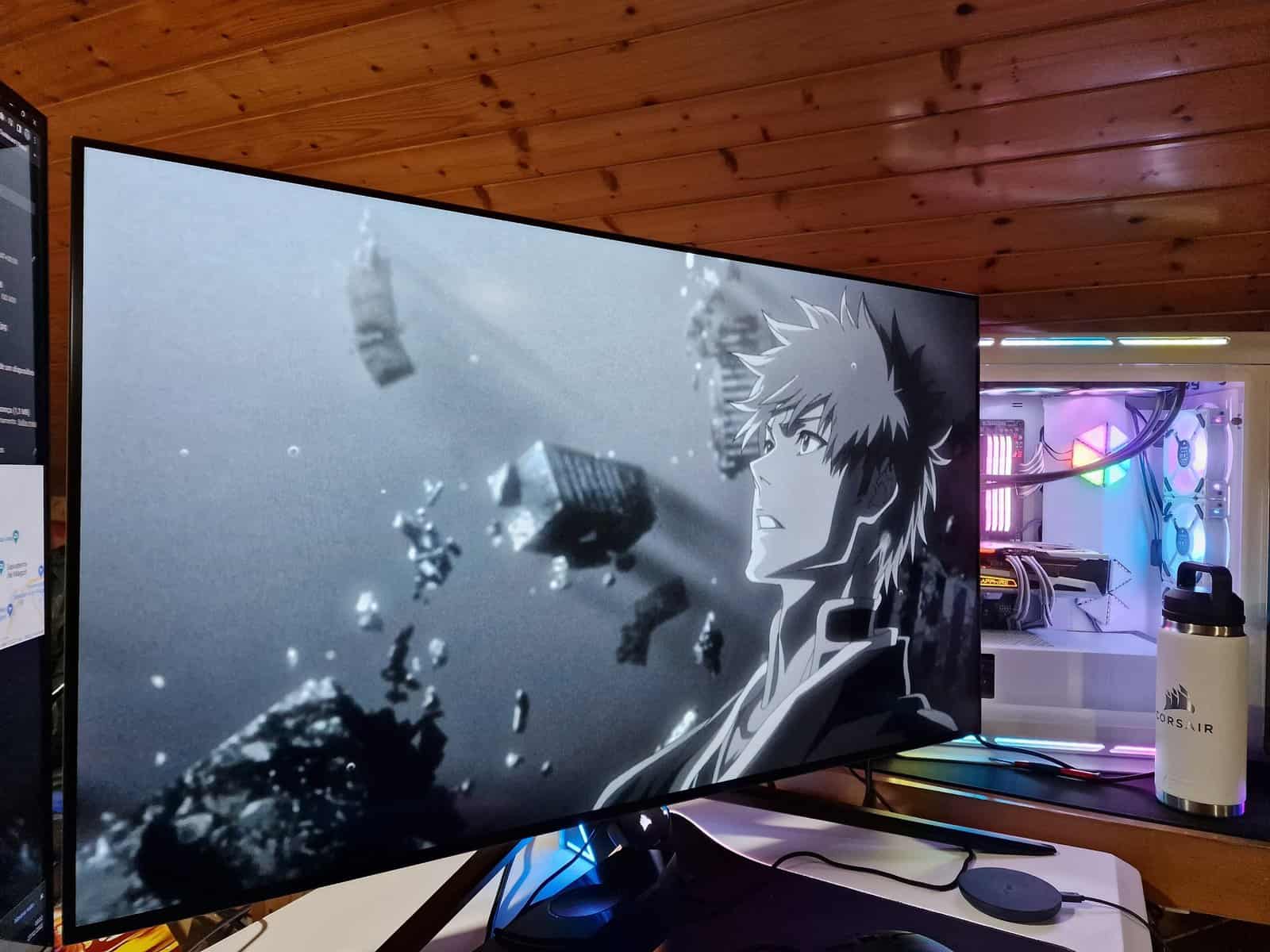 Normally, a TV doesn’t do 100% well as a monitor, nor does a monitor do perfectly well as a TV. This is now a thing of the past. 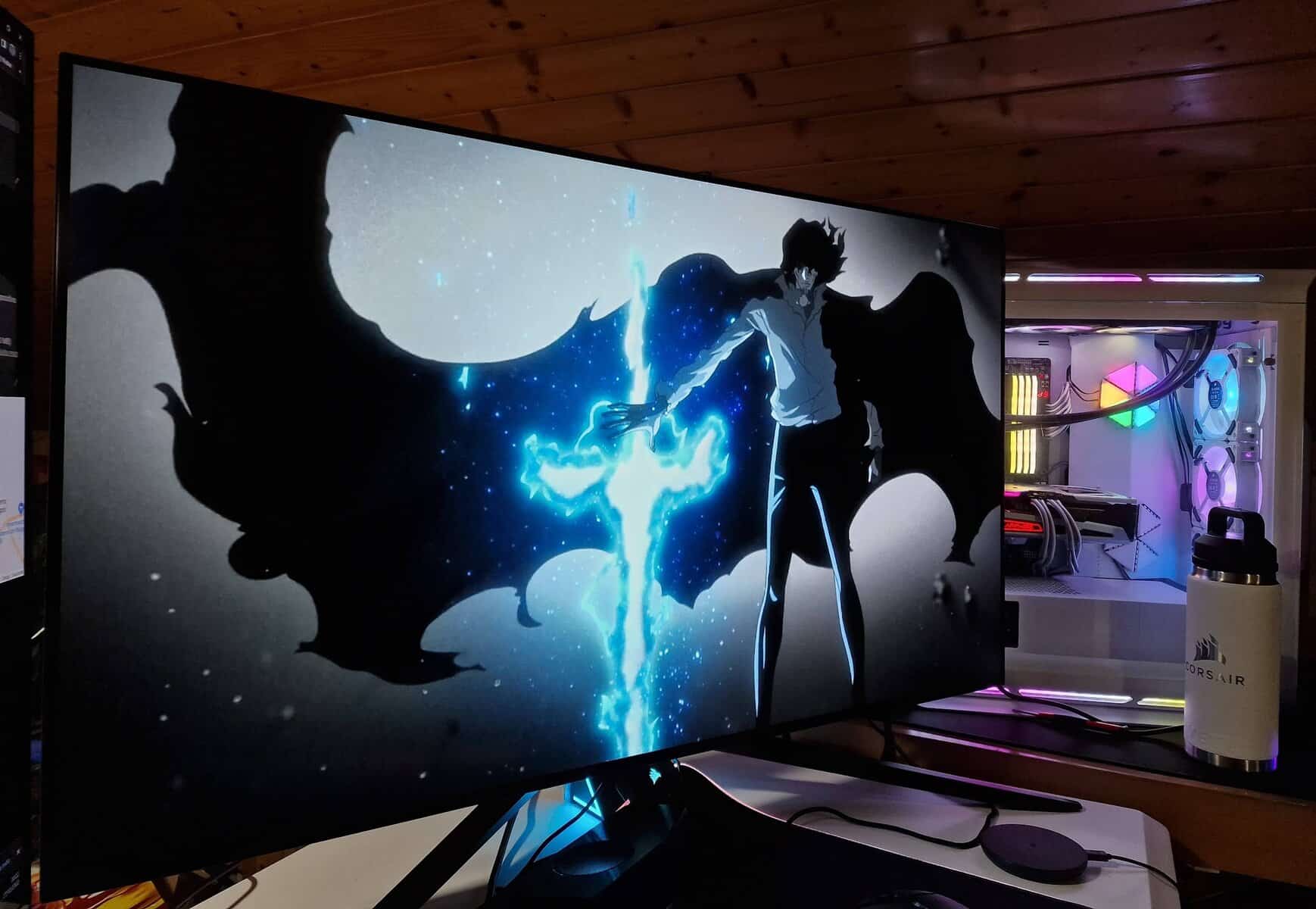 More important than that, it is a panel that works well both as a TV and as a monitor, thus escaping the old market rule.

In short, do you want a cool monitor to play, work, and even watch some series or movies? This KTC is absolutely amazing.

To test this thing of “serve as a TV or as a Monitor”, as soon as I received it for testing, as I was still waiting for parts to assemble a PC, and assemble a table, I put it in my room, with a Google TV pen 4k from RealMe connected to one of the HDMI 2.1 inputs. Well… The picture quality speaks for itself. Now see: 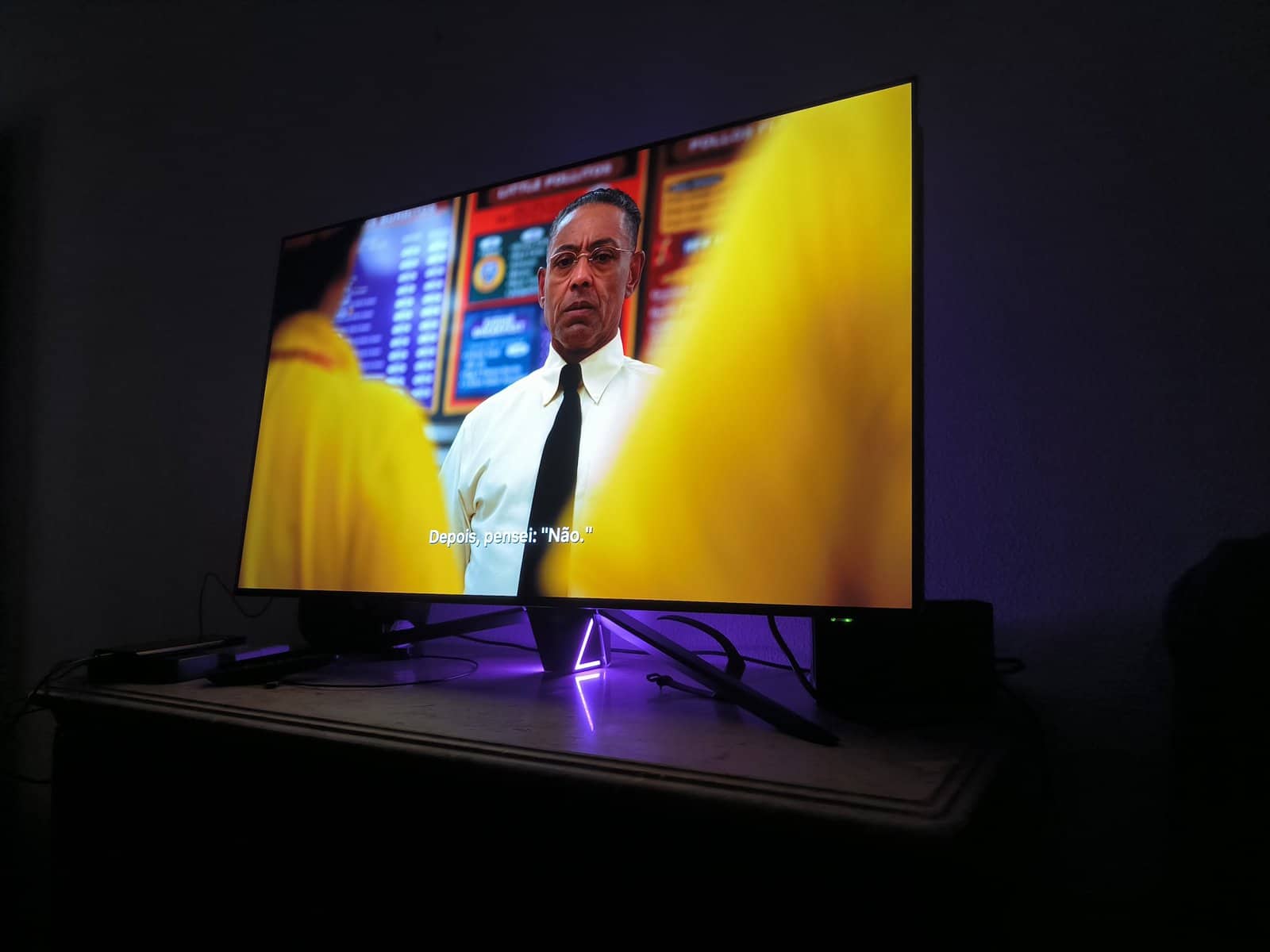 Interestingly, as a TV, in a room, it still leaves a very interesting ambient light on the back, thanks to the base, which ends up increasing the immersion even more, and thus, the focus on multimedia content. 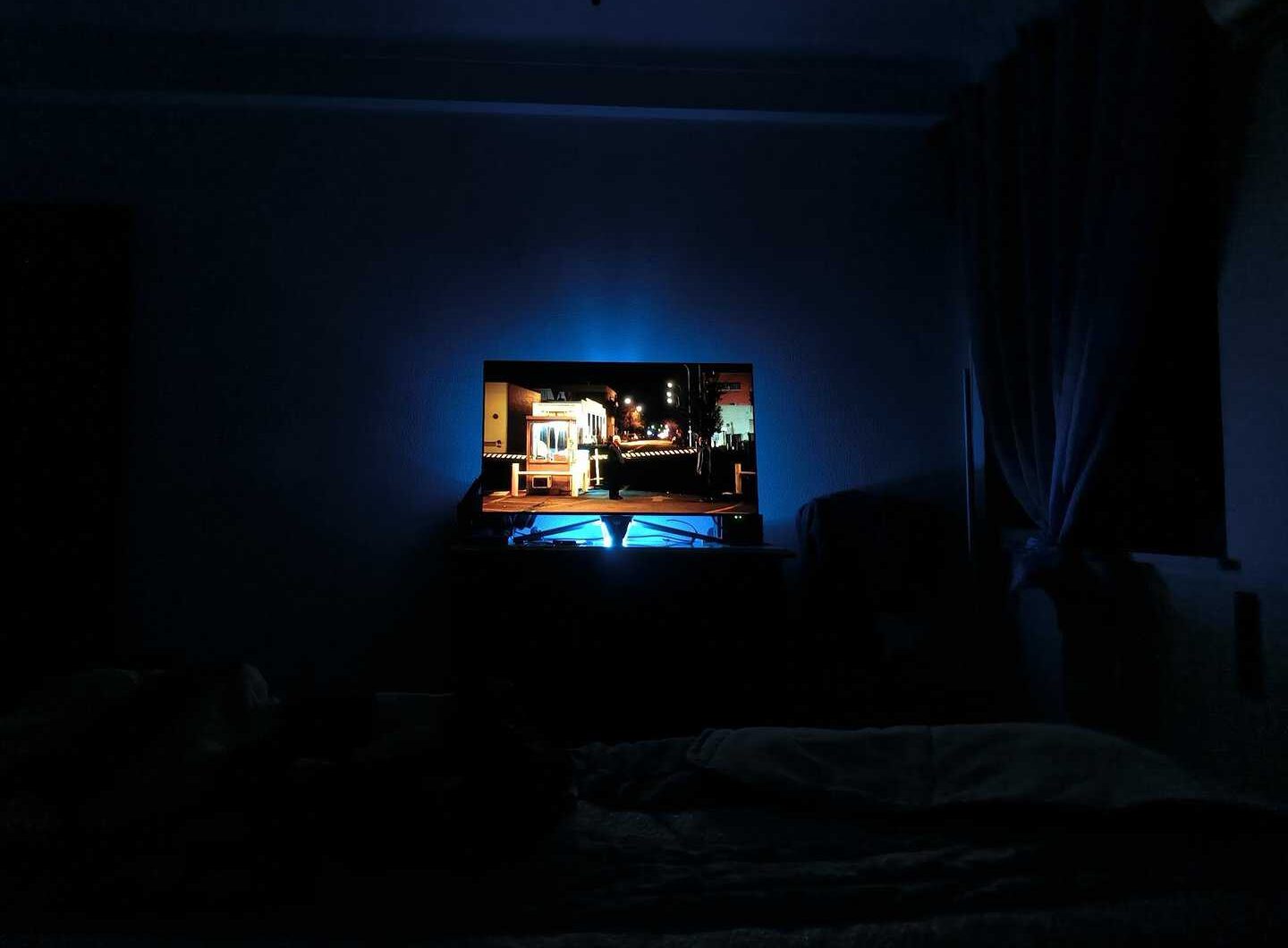 As for its technical characteristics, as we said above, we have a 42” OLED panel, capable of offering a native 4K resolution, and the possibility of reaching 138Hz thanks to some factory overclocking. Furthermore, we have a response time of just 0.1ms, and a maximum brightness of 600 cd/m2, while the contrast is around 135000:1.

Of course, this money-saving monitor is not VESA HDR certified. But… No need.

Its HDR performance is incredible, thanks to its core technology. In addition, we have 100% of the sRGB color gamut and 99% of the DCI-P3 color gamut.

It’s an amazing monitor for content creation, media consumption, and of course, gaming! But don’t forget… It’s a 4K monitor capable of getting close to 140Hz! You’re going to need a serious graphics card in your PC. Or else, from a PlayStation 5 or Xbox Series X, to reach the ever-desired 4K at 120Hz. (You can even have both on at the same time!)

As for G-Sync and Freesync technologies, although there is no official certification, support exists, and everything works perfectly. 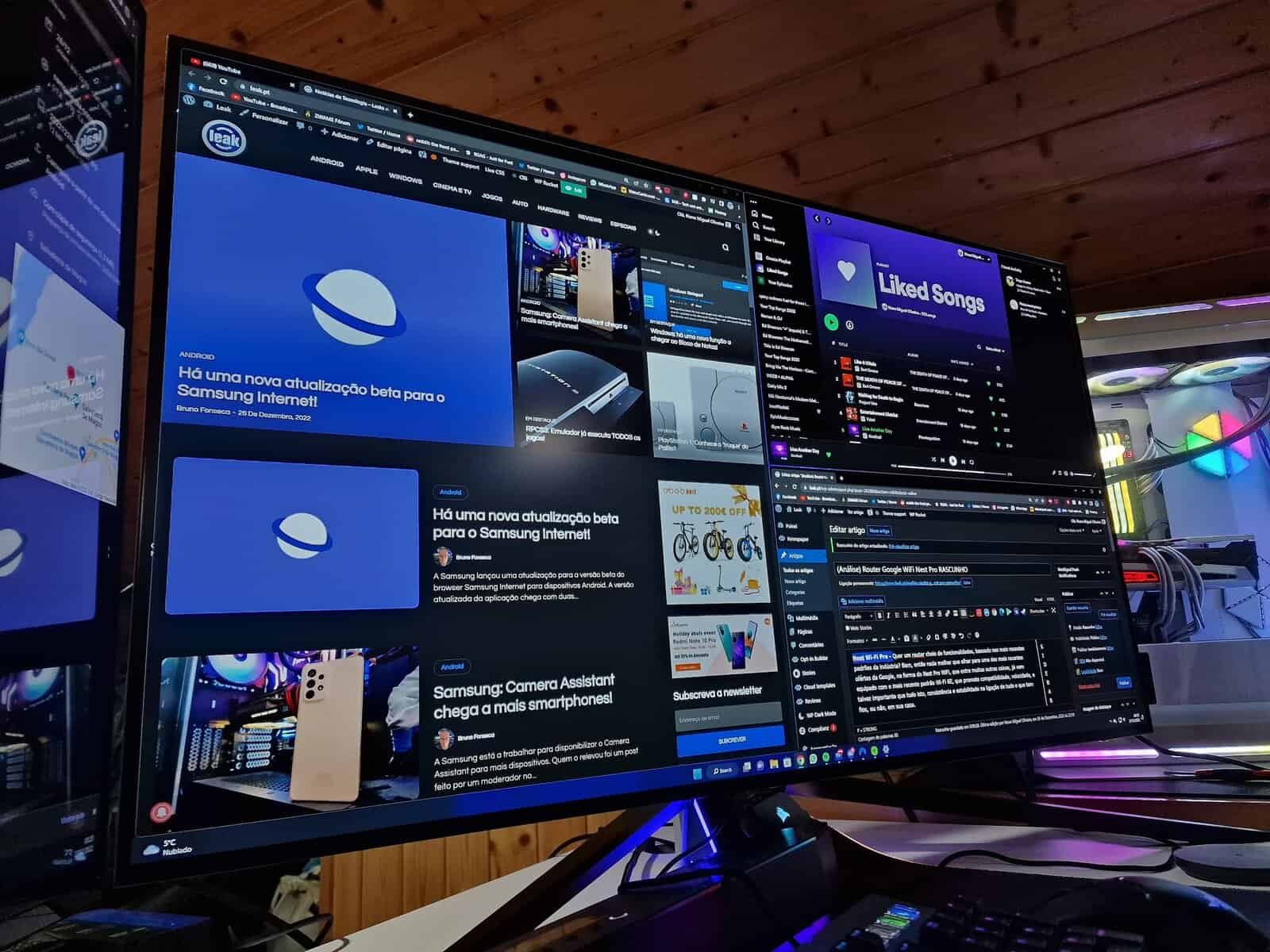 In short, you’ve been dreaming of a large monitor, of undeniable quality, based on the ever-desired OLED technology. Well… There’s no mistaking it. This KTC is the solution, being as good or better than some rivals, at a much cheaper price.

Build Quality Reasonable Price for the displayed quality HDMI 2.1 *2 G-Sync and FreeSync Design USB-C with DP and 90W ‘Decent’ speakers for a monitor

Base not included No certifications (to lower the price)

Also, what do you think about all this? Interested? We were surrendered! Share your opinion with us in the comments box below. Tesla: news of the "revolutionary" battery that should lower prices

Google Contacts has incredible news, but only in the Android app

How much video memory do you need for games?

God of War Ragnarok: The developers return to the history of the game and the role of father of Kratos