PlayStation Plus owners will get Star Wars Jedi Fallen Order, Fallout 76 and Axiom Verge 2 in January 2023 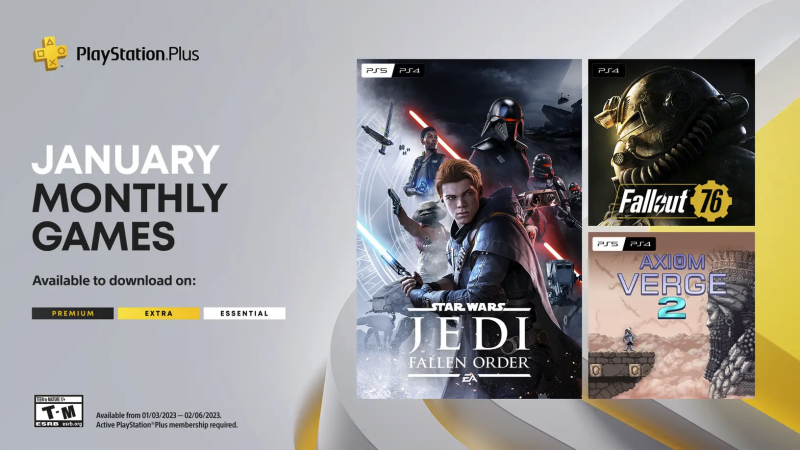 Starting with Star Wars Jedi Fallen Order, PlayStation Plus subscribers will be able to download three new games for PlayStation 4 and PlayStation 5 for free at the start of the month.

We are talking about Star Wars Jedi: Fallen Order and Axiom Verge 2, both in the PS4 and PS5 versions, as well as Fallout 76 for the PlayStation 4 (but compatible with PS5).

Star Wars Jedi Fallen Order is set in one of the franchise’s most memorable and darkest time periods, the years that separate the stories of Star Wars Episode 3 and Episode 4. A sad fate befell most of the Jedi Order. Heartbroken and disillusioned, young Padawan Cal Kestis joins two space pirates intent on opposing the Empire on a journey that leads him to explore different planets that hold great secrets.

Bethesda’s Fallout 76 is an MMORPG that has really come a long way since its debut. With over 13.5 million players, the game was enriched some time ago with The Pitt expansion, which allows fans to explore the post-apocalyptic version of Pittsburgh already appreciated in Fallout 3.

On the other hand, the third game is Axiom Verge 2, which is similar to the legendary Super Metroid in terms of world structure and gameplay. This sequel further expands the universe with new characters and encourages you to explore an alternative world similar to Earth, filled with the ruins of an ancient civilization and fraught with danger.

What Game Pass lost in 2022: how many games, what and the most noticeable losses

Android Auto: update took away one of the best apps!

Alexandria crushed Kolos in a match with three penalties