Hardware Outlook 2023: CPUs, GPUs, Monitors and Co. – What will the coming year bring?

The year 2022 flew by, with Corona largely losing a factor that favored delivery bottlenecks and gaining a new one with the war in Ukraine. Of course, the aftermath of Covid and the associated lack of chips will continue for a long time, as experts from the tech industry and CEOs of well-known hardware manufacturers still never tire of emphasizing. As is well known, however, this does not prevent any manufacturer from expanding its product portfolio in the coming year, regardless of whether it is chip manufacturers such as AMD, Nvidia and Intel or other giants from the technology industry who produce other forms of hardware such as monitors, SSDs or keyboards. In this annual outlook, we look at how things will continue in 2023 based on confirmed information or rumors and, in the case of CPUs and GPUs, take a brief look back at the second half of the year, which is still ongoing but will end in a few days.

Of course, the global and economic challenges this year did not detract from the new releases in the hardware areas, so there was plenty of movement in the CPU and GPU area. AMD presented the new Ryzen 7000 processors based on Zen 4, which were released together with the AM5 platform, which means: a PCI-E 5.0 ecosystem with a new socket, new I/O hubs and only DDR5 -R.A.M. So while AMD dared to start with four fresh CPUs, Intel took it a little more leisurely.

With the 13th core generation based on the Raptor Lake architecture, Intel did not bring a new socket into play, but retained backward compatibility for mainboards in its 600 series. However, there are still new 700 chipsets from Intel. The company launched three K-CPUs, a total of six including models without an integrated graphics unit, in 2022, of which a few more, but with different suffixes or none at all, will follow next year.

What should be clear for the coming year are the releases of further models from the AMD and Intel product ranges presented in 2022, not only for desktop PCs, but also for mobile applications. At CES 2023, which is coming almost immediately at the turn of the year and will again serve as a stage for product launches by many large tech companies, AMD and Intel will present further processors of the Ryzen 7000 and 13th core generation. An insider at Intel has pretty much already confirmed that the remaining 16 desktop CPUs based on Raptor Lake will be presented at CES. These are the non-K processors, which come up with lower power consumption (65 W) and no open multiplier. Then cheaper mainboards with Intel’s B760 and H770 should come onto the market.

At the presentation in September, CEO Pat Gelsinger teased that a CPU would be available in 2023 that would only be available in limited quantities and should be able to clock at 6 GHz out of the box. In all likelihood, this will be a Core i9-13900KS, which Alder Lakes already had in this form in 2022. Mobile devices are also expected to feature nine Raptor Lake H, HX, P and U Series models. Finally, there is a lookup with Alder Lake-N, which is supposed to be CPUs that only use E cores.

16:07
Ryzen 7000 benchmarks: Performance of the new AMD CPUs analyzed in the video

It will look similar at AMD. Three more Ryzen 7000 CPUs without an X suffix and with a power consumption of 65 watts will probably come onto the market in Q1 2023 and will be presented beforehand at CES. There have already been leaks for the 65 W CPUs Ryzen 5 7600, Ryzen 7 7700 and Ryzen 9 7900. Prices and maximum clock rates have even been included, which have not yet been officially confirmed by the public. Gaming enthusiasts will again be able to look forward to one (or even three) processor(s) with 3D V-Cache in improved 4 nm production, which AMD has already confirmed with its roadmap. 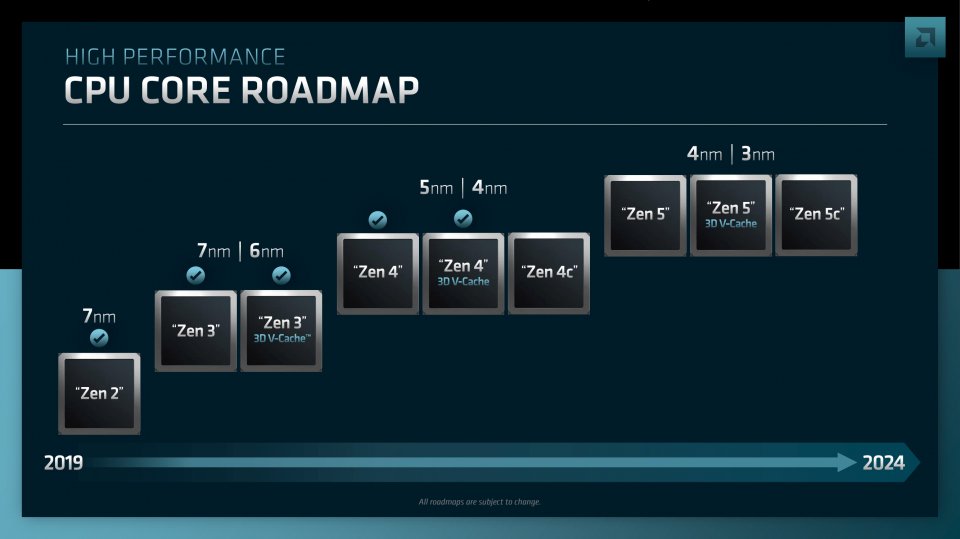 According to new speculation, three models will appear, each with 8, 12 and 16 cores, two of which will be equipped with over 200 MiByte cache. Specifically, it is about a Ryzen 9 7950X3D, 7900X3D and Ryzen 7 7800X3D, which will be presented at CES and could come onto the market in March. However, there is still a big question mark behind this rumour. For the mobile segment, AMD introduced a completely new system for modeling its laptop CPUs. Five processor families from the Ryzen 7000 mobile series are planned for 2023: Mendocino (Ryzen 7020), Barcelo-R (Ryzen 7030), Rembrandt-R (Ryzen 7035), Phoenix (Ryzen 7040) and Dragon Range (Ryzen 7045). ). All architectures from Zen 2 to 4 are used.

How Intel will proceed in the second half of 2023 has now been clarified, with a twist in the manufacturing process. The company originally planned to release the 14th CPU generation based on Meteor Lake next year. Intel has already clearly communicated the design of the chip, which should leave the assembly line in the now operational Intel 4 manufacturing process and TSMC’s 5 nanometers. The company has also confirmed that there will be another base change from Raptor to Meteor Lake. The 13th CPU generation, like its Alder Lake predecessor, relied on the LGA1700 socket, while Meteor Lake CPUs will in future be placed in the LGA1851 socket, as will CPUs from the successor Arrow Lake generation. According to rumors, the Meteor Lake CPUs are to be equipped with two fewer P cores than the 13th generation processors. 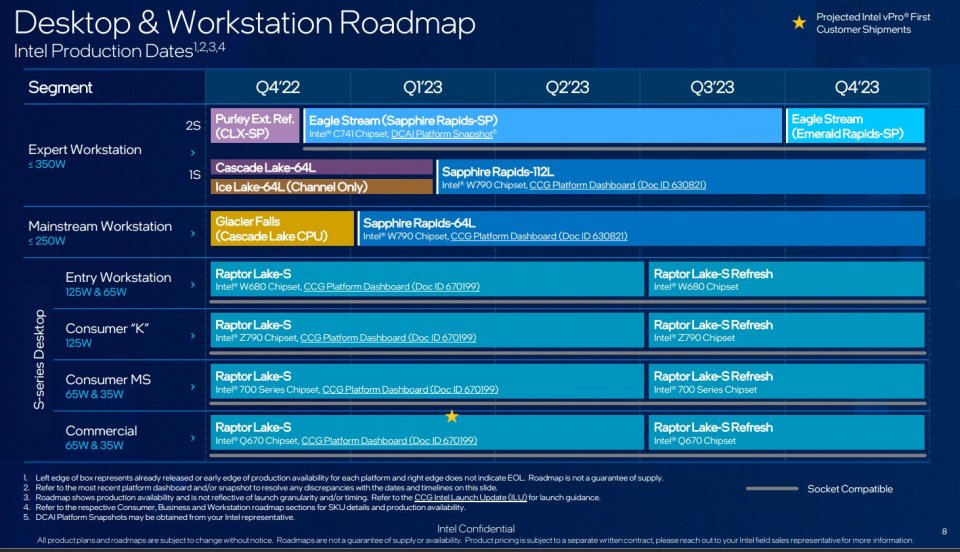 According to leaked Intel slides, however, there will be a big change in the release schedule, because Meteor Lake is only supposed to be used in the mobile segment in 2023 and in the desktop area only a year later. It was originally planned very differently, with the 14th CPU generation supposed to replace the 13th in 2023, but problems with the manufacturing processes seem to have messed up the schedule. Instead, there will be a Raptor Lake refresh for desktop CPUs next year, with slightly higher clock frequencies in the low three-digit megahertz range. This was also confirmed by the leaked Intel slides. New chipsets of the 800 series are therefore not planned, so that all current 700 series mainboards will continue to be supported by the Raptor Lake refresh.

Tired of Netflix? How to cancel your subscription – Aroged

What is the real autonomy of electric cars in winter?

VIDEO. Guardiola accidentally threw a bottle at someone on the bench

Curious update 1.21 has been released for hunting simulator Way of the Hunter