PlayStation Plus starts the new year with a selection of free games that is really difficult to criticize, which puts high production and quality values ​​in the field. Taken Together, Star Wars Jedi: Fallen Order, Fallout 76 and Axiom Verge 2 will be able to satisfy fans of solitary experiences with a high level of spectacularity as well as multiplayer game lovers, without sparing a wink to the admirers of courageous independent productions . The three new free PlayStation Plus Essential games will be available for download starting Tuesday 3 January 2023, the day on which they will permanently replace the free PlayStation Plus games of December 2022, namely Mass Effect: Legendary Edition, Biomutant and Divine Knockout.

In view of the release of Star Wars Jedi: Survivor, set for March 23, 2023 on PlayStation 5, Sony offers all PlayStation Plus subscribers the opportunity to recover its direct predecessor, Star Wars Jedi: Fallen Order, an action/adventure extremely solid third-person perspective, and one of the best Star Wars games ever made. 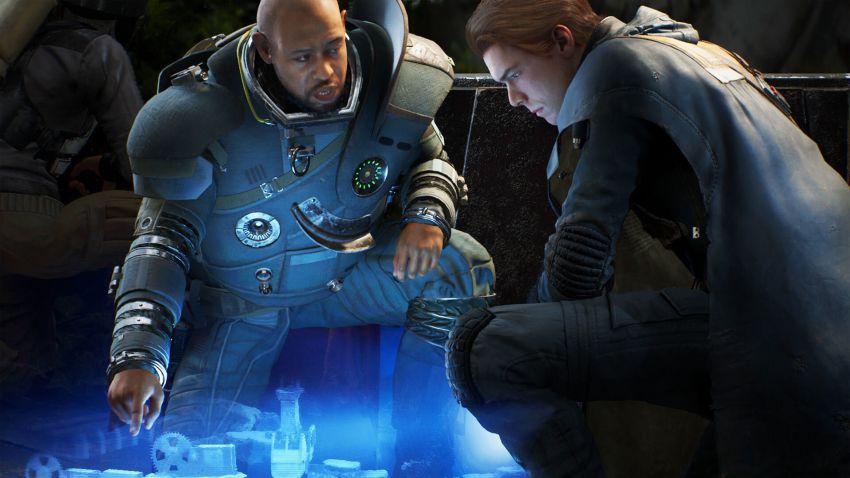 Set after the events of the film Star Wars Episode III: Revenge of the Sith, Fallen Order tells the story of Cal Kestis, a Padawan who survived the purge of Order 66. After five years spent in anonymity working as a junkyard on the planet Bracca, he is tracked down and attacked by the Inquisitors. Having narrowly escaped the ambush, he will have to complete the training abruptly interrupted years earlier, develop his own Force abilities and oppose the inexorable advance of the Empire.

Led by Stig Asmussen, already author of God of War 3, the Californian guys from Respawn Entertainment have given shape to a brilliant narrative plot, which fits into one of the most fascinating periods of the saga, and well-made gameplay, which amalgamates the greatest playful achievements of the modern action genre without introducing significant innovations. Star Wars Jedi: Fallen Order was conceived for PlayStation 4, but thanks to a specific patch for PS5 on the next-gen console it is now possible to choose between two graphics modes: Quality (4K and 30fps) and Performance (1440p and 60fps).

A long time has passed since the problematic launch of 2018. In all these years, Fallout 76 has received a conspicuous number of attentions from its creators, who have expanded, enriched and improved it beyond measure, transforming it into one of the most appreciated on the market. Fallout 76 represents a multiplayer prequel to the entire saga, being set in 2102, i.e. only 25 years after the nuclear apocalypse that devastated the Earth. In post-apocalyptic Appalachia, the largest dynamic open world ever to appear in the series, the surviving humans are played by the gamers themselves, who can choose to work together or rely only on themselves to survive. The main story begins upon exiting Vault 76: from that moment on, the character created with the help of the well-tested SPECIAL system will be able to explore six distinct regions of West Virginia, facing an incredible number of missions and taking advantage of the CAMP system (Center of Mobile Production Assistance), which allows you to produce shelters, supplies and safety objects anywhere in the world.

Fallout 76 is supported on an ongoing basis by Bethesda, which through the mechanism of the seasons makes new unlockable items and limited-time challenges available on a regular basis. To cap off another successful year, a few weeks ago it launched the Nuka-World on Tour update, which brought a new fairground west of Lake Reynolds where you can enjoy new public events, carnival-themed games, and a joke of hunt in search of a huge creature that threatens to ruin the festive atmosphere.

Axiom Verge 2 is a side-scrolling action-adventure inspired by past classics. Built on the solid foundation of its predecessor, it extends its scope by adding completely new characters, abilities and gameplay solutions. Indra, the billionaire head of one of the most powerful multinationals on Earth, heads to Antarctica to investigate the disappearance of her daughter. She arrived on the spot she is catapulted into the Underworld, an alternative reality apparently similar to our planet, but populated largely by hostile machines. The bio-organic rooms of the first Axion Verge give way to large natural spaces, which conceal the ruins of an ancient technological civilization, whose disappearance represents one of the greatest mysteries of the game.

The story of Axiom Verge 2 is cryptic and vague, designed to be reconstructed by the player through the few dialogues with the non-player characters and the documents hidden in the settings. The playful qualities, on the other hand, are there for all to see: the exploratory component undoubtedly represents the flagship of Thomas Happ’s metroidvania, even more than the fights, which focus on close-up clashes with white weapons rather than on the shootings of the predecessor. Progression is marked by the acquisition of new skills and the related backtracking, while the new mini-drone allows Indra to explore another reality, the Breach, a location with alien shapes and colors painted with 8-bit graphics which deviates from the refined pixel art of the rest of the production. You will know more by reading our review of Axiom Verge 2.

The authors of Treyarch dreamed of a deal with Microsoft, hoping that it would change a lot

Xbox Game Pass: This game is surprisingly on subscription today