The best games for your New Year’s Eve party 2022

The end of the year is imminent and one or the other of you will probably meet up with friends and/or family on New Year’s Eve to celebrate the new year together. We eat, drink and (hopefully) have a lot of fun.

But maybe you’re wondering which video games are particularly suitable for New Year’s Eve? How can you spend a few pleasant hours in front of the television screen together with others until the turn of the year? We’ve rounded up some of the best New Year’s Eve party games for you in our list. As usual, there is no particular order. Have fun reading and of course you can also make your own suggestions!

Overcooked: All You Can Eat (2020 – PC, Xbox, PlayStation, Nintendo Switch)

Overcooked can sometimes get a bit messy when you’re sober. How does that only work when the first alcohol has flowed on New Year’s Eve? Even more fun if you try to cook together. That’s not to say Overcooked isn’t fun when sober. But on the contrary.

A clear head definitely doesn’t hurt if you want to keep track and hand out the right dishes at the right time. It all looks so easy at first glance, but it takes good teamwork to master the kitchens or levels in Overcooked: All You Can Eat with the highest scores. And that’s not just great fun on New Year’s Eve.

Interest? Overcooked: All You Can Eat is available for PC on Steam, for Xbox on the Microsoft Store, for PlayStation on the PlayStation Store and for Nintendo Switch on the eShop. 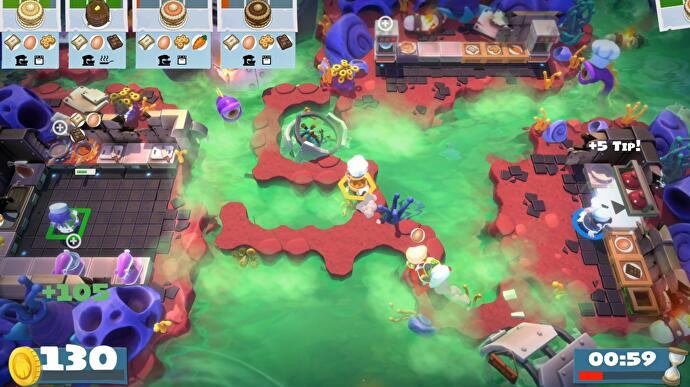 Cook together. Sounds easier than it really is.

Moving Out goes a bit towards Overcooked. No, it’s not about cooking, I mean the cooperative game idea behind it. It’s a physics-based moving simulator – that alone promises neat chaos – where you have to work together to move furniture safely out of houses.

Which is easier said than done. You can play this alone, but it’s even more fun with others. And it’s definitely more fun when you can blame other human players for what you might have done wrong. Or something like that. You know how the co-op bunny works. In any case, creativity is required here and there to achieve your goal with the furniture.

Interest? Moving Out is available for PC on Steam, for Xbox in the Microsoft Store, for PlayStation in the PlayStation Store and for Nintendo Switch in the eShop. 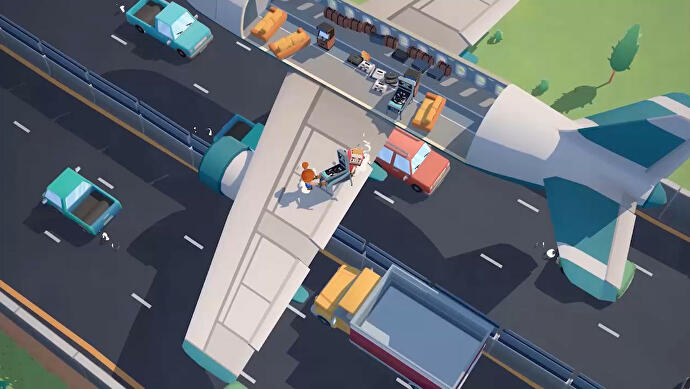 The same applies to moving together. What could possibly go wrong?

Basically, the following applies to Quiplash: The more players, the better and the more fun potential there is. You now not only get the first part (only in English), but also two sequels: Quiplash 2 and Quiplash 3, the latter in the bundle The Jackbox Party Starter. Part two and three can also be played in German!

What is Quiplash? Well, you have to answer questions. As funny as possible. Or creative. Both can bring points. In any case, you can write whatever you want and in the end everyone votes for the best answer. Depending on your mood, this can be extremely entertaining.

Interest? Quiplash is available for PC on Steam, for Xbox on the Microsoft Store, for PlayStation on the PlayStation Store, and for Nintendo Switch on the eShop. 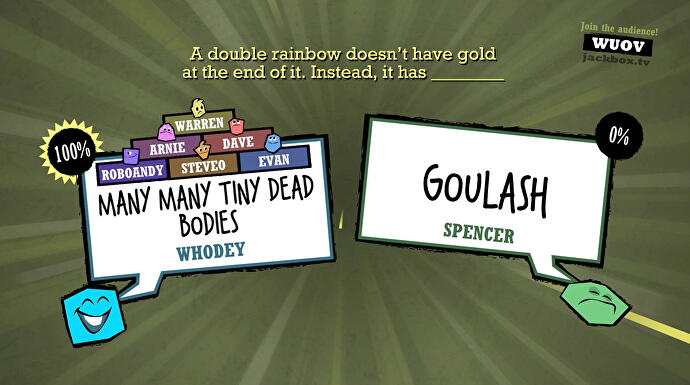 Always good for a round in good company is Mario Party Superstars, the latest installment in the series. And with this, Nintendo again takes a trip back in time and is based on classic games from the Mario Party series.

On the one hand you have five classic game boards from the N64, as well as 100 mini-games that you may (or may not) know from the past. The game principle remains the same. Gradually everyone moves across the board and has to accumulate as many coins as possible to buy stars. In between, you compete against each other in mini-games and have to deal with the respective peculiarities of the game boards, which can be useful or harmful to you. Great fun together, especially when you steal each other’s coins and stars.

Interest? For Nintendo Switch there is Mario Party Superstars in the eShop. 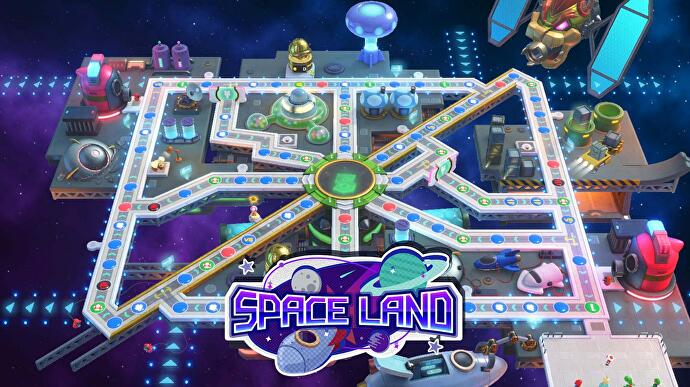 Experience classic game boards and mini-games in a new guise.

Also a good candidate for a social gathering. And here you can even drive without hesitation if you are already drunk. Whether that’s beneficial to you or not is another question. Here, you’ll compete against each other in split-screen, drifting around corners and banging on the items you pick up as you make your way around the courses.

And if you don’t just want to drive around the track, you can jump into battle mode and try to destroy the balloons hanging from the back of everyone’s kart, for example. In any case, there are many routes to complete (even more with a booster route pass) and here too there is enough potential to annoy your fellow players. Anyone who gets caught and overtaken by a tank just before the finish line knows what I’m talking about.

Interest? For Nintendo Switch there is Mario Kart 8 Deluxe in the eShop. 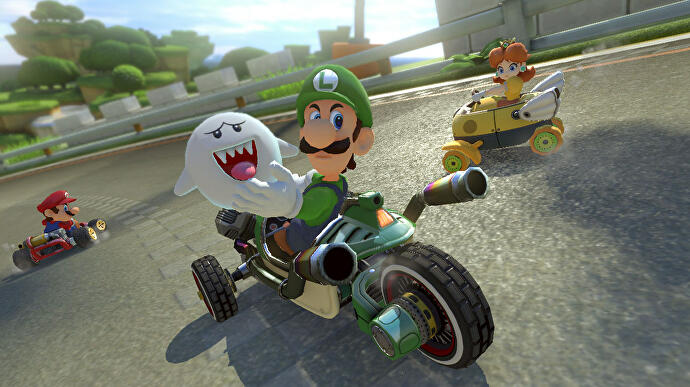 Always good for a round.

Classic trivia games are few and far between these days. One of the newer exponents of this genre, although the game is quite a few years old, is It’s Quiz Time, created by former developers of the previously popular Buzz series. So quiz experience is there and the game has more than 25,000 questions that will test you more or less.

The whole thing is moderated by the AI ​​character Salli, who asks you questions in different categories that are suitable for all ages. History, sports, video games and cartoons are just a few areas covered by the questionnaire. Up to eight people can play together simply with the help of smartphones. A good option if you’re thirsty to test your knowledge.

Interest? It’s Quiz Time is available on Steam for PC, on the Microsoft Store for Xbox, and on PlayStation Store for PlayStation. 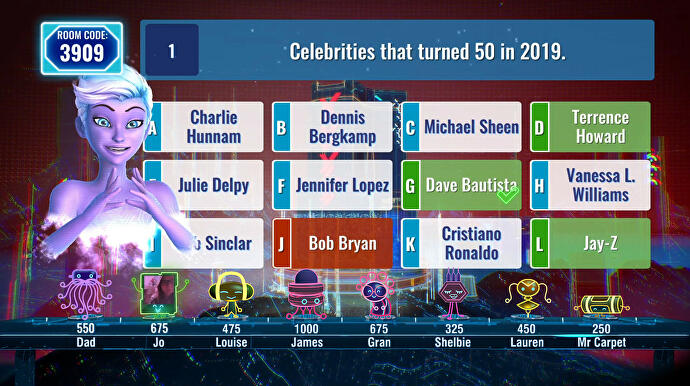 Put your knowledge to the test.

Originally, Among Us was intended as a party game, so it is also perfect for the New Year’s Eve party. Here you can put to the test how good you can fool others. In the midst of all characters there is one or more traitors who kill the other characters and try to sabotage everything. But who is it?

That’s exactly what you have to find out and advise each other about who the traitor could be. But your guess isn’t always right, so be careful who you accuse. You send away suspected traitors. Stupid only when it was the wrong people. But that’s also what makes it fun. Of course, if you are the traitor, you must try to deceive the others and convince them that you are not.

Interest? Among Us is available for PC on Steam, for Xbox on the Microsoft Store, for PlayStation on the PlayStation Store and for Nintendo Switch on the eShop. 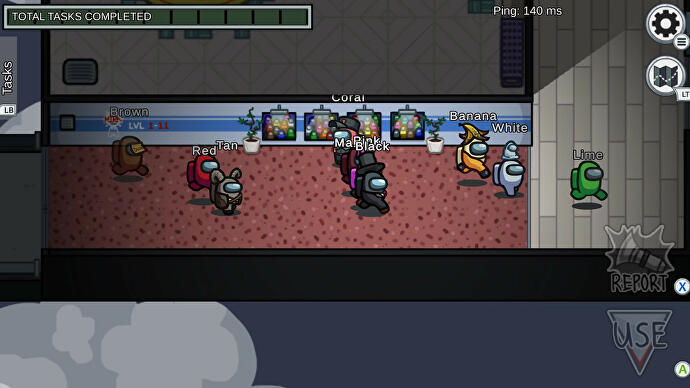 Who is the traitor?

If you want to beat each other up, please don’t do it in real life. Instead, for example in Gang Beasts! Here you play jelly figures, with which you move around in a strange way. But that is also one of the challenges of the game.

You fight each other in dangerous environments and compete with other characters to see who falls off the map and emerges victorious. Mainly because of its movements and the absurd situations Gang Beasts is a real party fun. Try playing this with some alcohol in your blood. This is guaranteed to be fun!

Interest? Gang Beasts is available for PC on Steam, for Xbox on the Microsoft Store, for PlayStation on the PlayStation Store and for Nintendo Switch on the eShop. 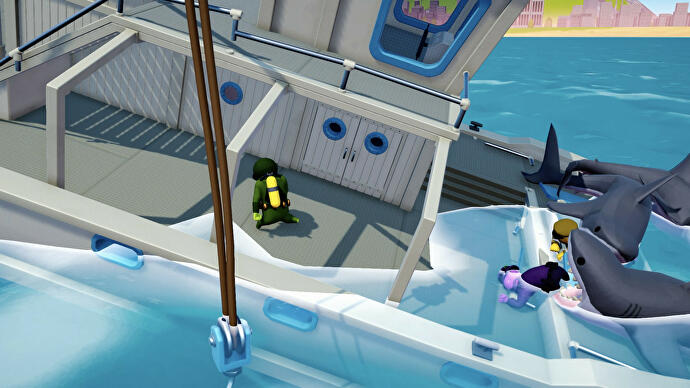 Only the strongest prevail. Or the luckiest.

Following the LittleBigPlanet series, Sackboy is back with a new adventure and must save his family kidnapped by Vex. Not only can you embark on the journey alone to not only save your family, but you can also get help from fellow players on board.

In the platform adventure, there is a lot of jumping and you use Sackboy’s various actions to master the challenges that await you on your way. There are even exclusive co-op levels, so it’s even more rewarding to venture out with others.

Interest? Sackboy: A Big Adventure is available on Steam for PC and on PlayStation Store for PlayStation. 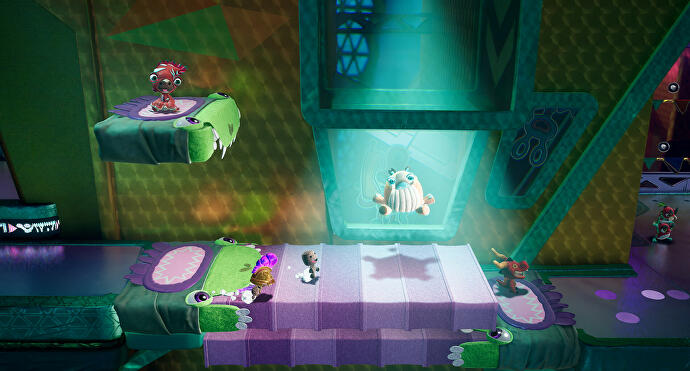 Experience a new adventure with Sackboy.

If there’s been some alcohol on New Year’s Eve, how about hitting the dance floor? Sounds like entertaining fun. Definitely for those watching. For those who participate? Who knows. But you can always find out for yourself with the help of Just Dance 2023.

Among other things, you can dance to BTS’ Dynamite and many, many other songs here and try to get as close as possible to the default with your moves. You can create your own playlists, there are different game modes and you can expand your music library over time.

Interest? Just Dance 2023 is available on the Microsoft Store for Xbox, on the PlayStation Store for PlayStation and on the eShop for Nintendo Switch. 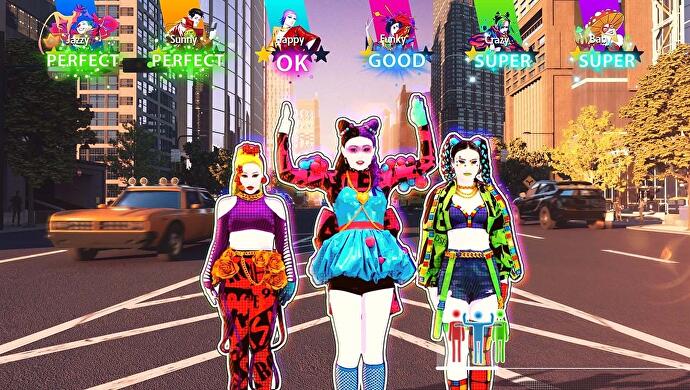 Time for a little dance.

Not the right thing for you? Then have a look at the best snow levels and worlds, the best Indiana Jones games and the best Simpsons games!

10 years before the next Pokémon generation?

Fnac launches its last promotion of the year!

Avowed will “impress people” and changing some developers helped, for Jez Corden

Savior or hypocrite? Who is Jim Ratcliffe, who is going to buy Manchester United

MEO, NOS or Vodafone? Here is the operator that leads all segments in 2022