Is it the best game of the year? Probably not for many. I’m not even 100 percent sure if I would vote it my best game of the year. The fact of the matter is that I had a lot of fun playing Kirby and the Lost Land and the game made me feel comfortable playing it from start to finish. Nothing against games with a deadly serious story and countless cutscenes, I like playing those too, but Kirby and the Forgotten Land just conveys a feeling of light-heartedness that is typical of many Nintendo games.

Back then, when the Russian war of aggression in Ukraine started not very long ago and the future prospects were not exactly rosy together with Corona, Kirby playfully put me in the good mood I needed. Mentally freed from all earthly problems, I could immerse myself in a beautiful and colorful 3D world and explore this cute pink ball to the last corner to fathom its secrets. Because there is a lot to discover in the levels!

And the cuteness doesn’t just apply to Kirby. Just look at the Waddle Dees. Or the various opponents, such as the dog-like Klaffis. And King Dedede. The whole game is so lovingly designed from start to finish and trimmed to be sweet that you almost get diabetes while playing. 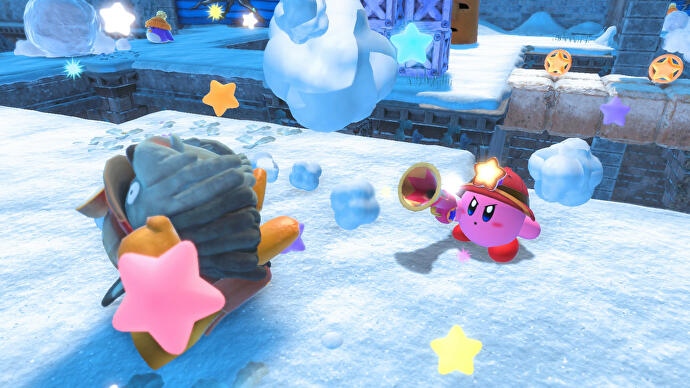 Even when he wants to scowl, Kirby still looks cute.

At the same time, Kirby and the forgotten land proves that the series also works in a real 3D world. No more side-scrolling Kirby adventures, the future is three-dimensional. This first step proves that the Kirby concept has a right to exist at least as well in the third dimension. The newly gained freedom and the different point of view, even if the process is still strictly linear, suit the series well. Sure, the core of the latest part isn’t much different than previous adventures, but the changed perspective and more freedom of movement make a difference. Maybe there will be more in terms of more open level designs in the future? In any case, I hope the next part builds on that.

We know that Kirby likes to swallow things and enemies. That takes Nintendo’s pink hero to the extreme in Kirby and the Forgotten Land. Kirby quickly becomes a car or a vending machine and skilfully uses the mobility he has gained or his ability to shoot soda cans to face new challenges. Sure, this game is never really complicated and complex – it gets a bit trickier with the time limits of the optional challenges – but that’s what makes it so good and worth playing for me. I can play lightheartedly, relax, and really enjoy the game without constantly getting punched in the face by the game at every opportunity or being reminded how bad the world or people are. Kirby and the forgotten land is the perfect antidote to that.

Pelé: the career of the only footballer with three World Cups in video games!

Google Chrome 111 could block 20% of the internet

According to an insider, a different studio will be working on the alleged remake of Horizon Zero Dawn for PS5

Kaspersky Lab will disable its VPN in Russia