Skill points in The Witcher 3: what skills to pump and how to reset 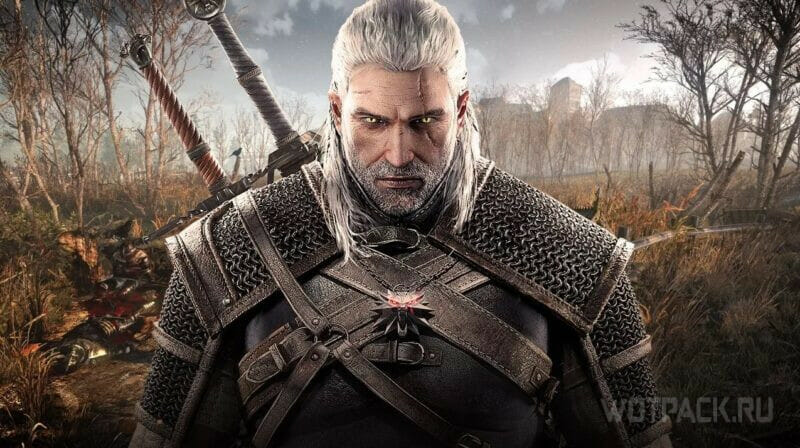 Skill points in The Witcher 3 are a fundamental part of the character build, which allows you to create a good build for comfortable exploration of the open world on any difficulty. The character development section consists of three categories – red, green and blue. Each one is tied to a specific playstyle through melee or ranged combat.

With the release of The Witcher 3 Next-Gen Update, the branches have gone through some changes. Next, let’s take a closer look at the skill point system in The Witcher 3 improved version. Read on to find out which skills to upgrade, as well as find out which of the sections has become stronger after the update – Swordsmanship, Alchemy or Signs.

The basics of pumping skills in The Witcher 3

The skill system in the third part is radically different from its predecessors in the series, and after the release of The Witcher 3 remaster, it went through an unexpected rebalance. In particular, the description of some skills has changed. The mechanics remained intact, the analysis of which is presented below.

How to unlock and improve skills

The convenience of the leveling system lies in the fact that the player does not have to delve into the long Talent Tree and learn unnecessary skills just to get to the desired main skill.

As an example, consider the section “Fencing”. To learn the Lightness of the Legs skill, located in the Defense category, all you need to do is: 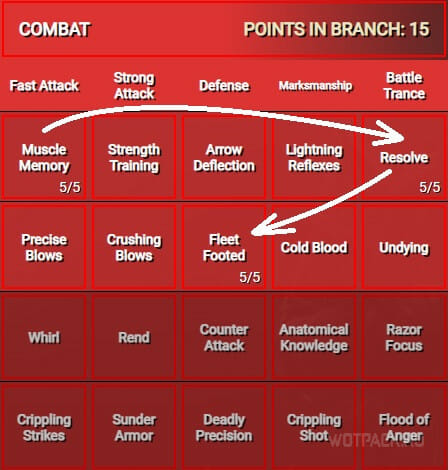 [еще не обновленный калькулятор умений Ведьмак 3]Thus, the second line of the branch will be unlocked, providing the opportunity to open any skills of interest, even if they do not belong to the previously affected categories.

How to activate skills

In order for the effect that is inherent in the skill to become active, it is necessary drag icon skill into a free cell on the panel located on the right side of the screen. 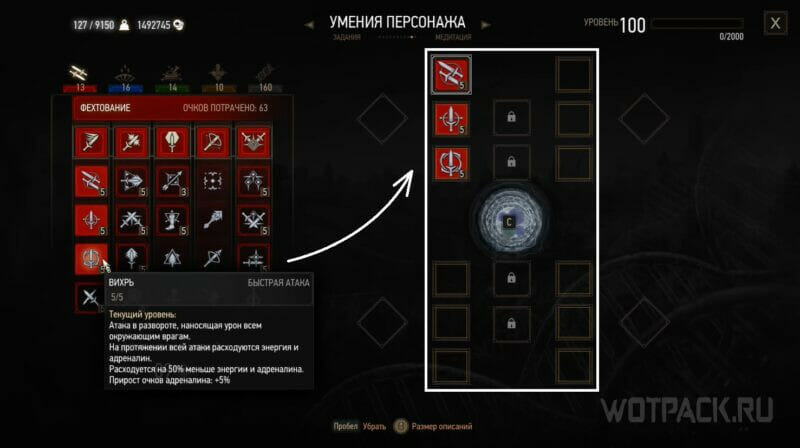 Windows for placing skills, in turn, open upon reaching a certain level. Some of them may become available after completing the main storyline and unlocking the New Game Plus.

How to get extra skill points

Thus, special points (“skill points”) become a priority for farming in The Witcher 3 Remaster. However, there are few ways to get them:

The first is based on increasing the level of Geralt by completing additional missions, clearing certain locations from monsters and the usual grind. The second is to explore the open world for the presence Places of Power.

It is worth looking for them first of all, since additional skill points on the stratum are an extremely useful resource.

To make your journey easier, check out a separate guide showing the locations of all the Places of Power in the game.

How to reset skill points in The Witcher 3 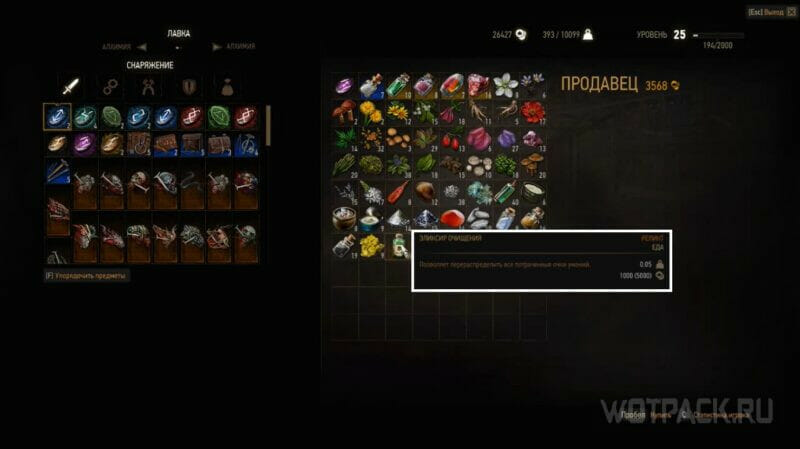 Resetting skills in The Witcher 3 is an opportunity to redistribute skills and, for example, completely change the style of play if the old one is fed up. For this action you will need a special potion – Elixir of Purification. To unlock the alchemical “drink”, you must:

After completing the Elixir of Purification quest, it will periodically begin to appear even at other merchants, the price will remain the same – a thousand crowns.

What skills to pump in The Witcher 3

Skills are the main part of the character build, which determines the style of the future game. In The Witcher 3: Wild Hunt (4.0), skills are still divided into four branches, three of them are considered basic: Fencing, Alchemy and signs. Each consists of five categories, opening the way to different combat tactics, and has both attractive skills to use and useless ones.

General Skillsin turn, are aimed at improving the additional characteristics of the character and are especially useful in the early stages of learning witcher history.

Preferring the red branch, be prepared for constant battles face to face with the enemy. This group of skills is responsible for the ability to skillfully wield a melee weapon, inflict maximum damage with continuous series of attacks, or instill fear with heavy and powerful blows.

Builds built around red skills are demanding on competent gameplay: for the full disclosure of “vortex” and “discontinuous” assemblies, it is important to learn how to dodge, parry and counterattack in time. Especially on the higher difficulty level.

Swordsmanship in The Witcher 3 next-gen version has the fewest changes compared to other skill trees. At the same time, the rebalance of the Rift put an end to the implementation of fast gameplay through a “heavy” assembly. The reason for this is the cooldown of a few seconds after using the skill, which cannot be prevented by pressing LMB again, as before.

High variability. Boost lines “Powerful attack” and “Quick attack”. Increased crit chance. crossbow shots: increased from 25% to 60%. Boost of the skill “River of Wrath”: previously the skill increased the power of the Sign by 125%, now – by 300%. The number of points spent on the full leveling of the red branch – 54 (was 91).

The main disadvantages of the branch:

A well-timed block (“Arrow Reflection I/II”) still deflects arrows, but more not deals damage to the attacker. Slow animations of a shot from a crossbow under water. Cooldown after using Rupture.

This section is considered one of the most undemanding branches in the game, if we talk about the cost of skill points. This allows you to combine Signs with swordsman and alchemist skills without compromising their leveling. Each of the five dividing lines is aimed at strengthening a certain witcher “power” – Aarda, Igni, Irden, Queen and Action.

When building a build, it is important to focus on strengthening one Sign (maximum two). The buildup of additional branches can stall the development of auxiliary branches if the player’s gameplay is not based on full-fledged magical resistance.

With the release of the new version of The Witcher 3, builds based solely on the skills of the blue branch have become very popular. Previously, turning Geralt into a skilled mage able to maneuver smoothly in ranged combat was difficult. After the rebalance, it’s more than possible.

The power of each Sign (the third line of the branch) has been increased from 25% to 30%. Sign of Aard deals up to 300 damage. additional damage (“Shockwave III”). Previously it was 200. The Charged Glyphs skill has become stronger due to a new additional effect: the higher the level of the enemy or the more powerful the Sign, the greater the damage. Previously scaled by level/power not was. The number of points spent on the full leveling of the red branch – 59 (was 79).

Flaws – missing: Skill rebalance had a positive effect on Signs.

Mostly the skills of this section are used for the effective work of the Euphoria mutation, which is the constant choice of most warriors.

However, there are builds that push Swordsmanship and Signs into the background, giving way only to green cells. Should a beginner focus on them? No. Fans of decoctions and potions, having no experience behind them, it is better to put aside alchemy builds in a distant box. At first, combine the green skills with the skills of the red branch. Later, when more powerful alchemical components are discovered, as well as the New Game Plus, you can start experimenting.

Alchemy itself, in turn, has undergone the most changes in the updated The Witcher 3.

Leveling each skill increases the duration of elixirs and bomb damage by 5%. Previously – only the duration of the elixirs. The “Fixer” skill, pumped to level III, opens up the possibility of applying three different oils to the sword at the same time. “Hunting Instinct” and “Synergy” skills now work correctly. All bombs, even those that do not normally damage enemies, deal 300 damage to enemies in addition to their normal effects. damage (“Explosive Case III”). Previously 150. Increased Resistance and Pain Disdain no longer conflict with each other. The number of points spent on the full leveling of the red branch – 58 (was 88).

The main disadvantages of the branch:

«General Skills“still occupy the role of an auxiliary branch, which is aimed at developing the third-party characteristics of Geralt. The main part of the skills is tied to increasing the maximum level of health, indicators of regeneration or protection of the character. 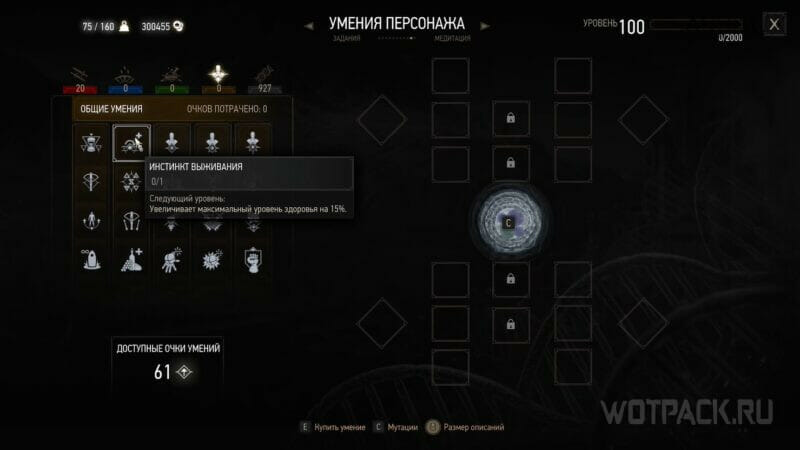 At the start of the game, their buildup can greatly simplify the exploration of the open world. At higher levels, the effects, while still useful, lose their overall power against the background of the skills of the aforementioned branches.

We hope our guide helped you understand what skills to upgrade after the update and how skill points now work in The Witcher 3 next-gen version. Write to commentsIf you have any questions, we will try to help. Read how to complete the quest “In the Shadow of Eternal Fire” and how to get the Forgotten Wolf School equipment in The Witcher 3 Nextgen.

"Barely had time to reload." Air defense forces spoke about the New Year's attack on Kyiv

New Ant-Man 3 Trailer Coming, Then You Can See It!

Xbox Game Pass is coming (and going) in November 2022

Sell, give away, gather dust: What is the best thing to do with the old gaming PC?