SpaceX today launched a Falcon 9 launch vehicle carrying Israel’s EROS-C3 Earth remote sensing satellite. For Elon Musk’s company, this was the 61st rocket launch in a year. It is also interesting to note that earlier Israeli satellites of this series were launched by Russia. 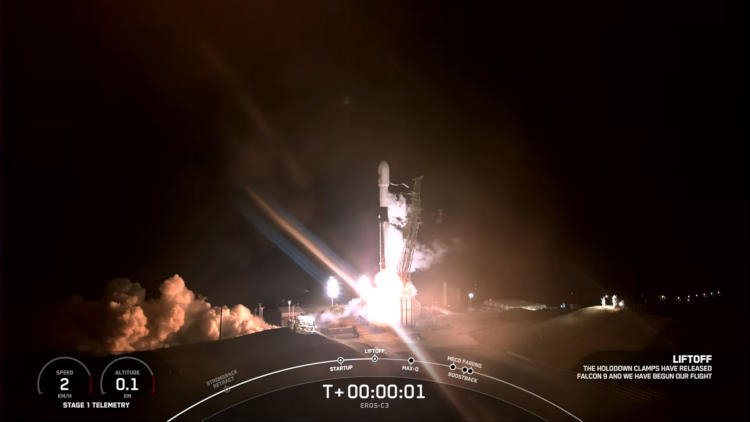 The rocket launched from Vandenberg Air Force Base (California) at 23:38 local time (10:38 Moscow time on December 30), a little more than 8 minutes after launch, the first stage of the Falcon 9 rocket successfully landed at Landing Zone 4 – it has already been used in ten missions. For SpaceX, this is the 61st and final launch in 2022. For comparison, in 2021 there were almost half as many — 31.

The Israeli EROS-C series satellites are used by the defense and intelligence agencies to conduct operations “in conditions of complete confidentiality and data protection.” The EROS-C3 model has a resolution of about 30 cm for grayscale images and 60 cm for multispectral images.

The first satellite of the family, EROS A, was launched in 2000 and returned to Earth in 2006. There is not much information about EROS-B, EROS-C1 and EROS C2 that continue to work in orbit, probably for security reasons. Two EROS vehicles were launched into orbit by the Russian Start-1 launch vehicle – launches were made from the Svobodny cosmodrome in the Amur Region.

Resident Evil 4 Remake, development in the final stages: a postponement is very unlikely

KLINSMAN: France v England should have been a semi-final or final