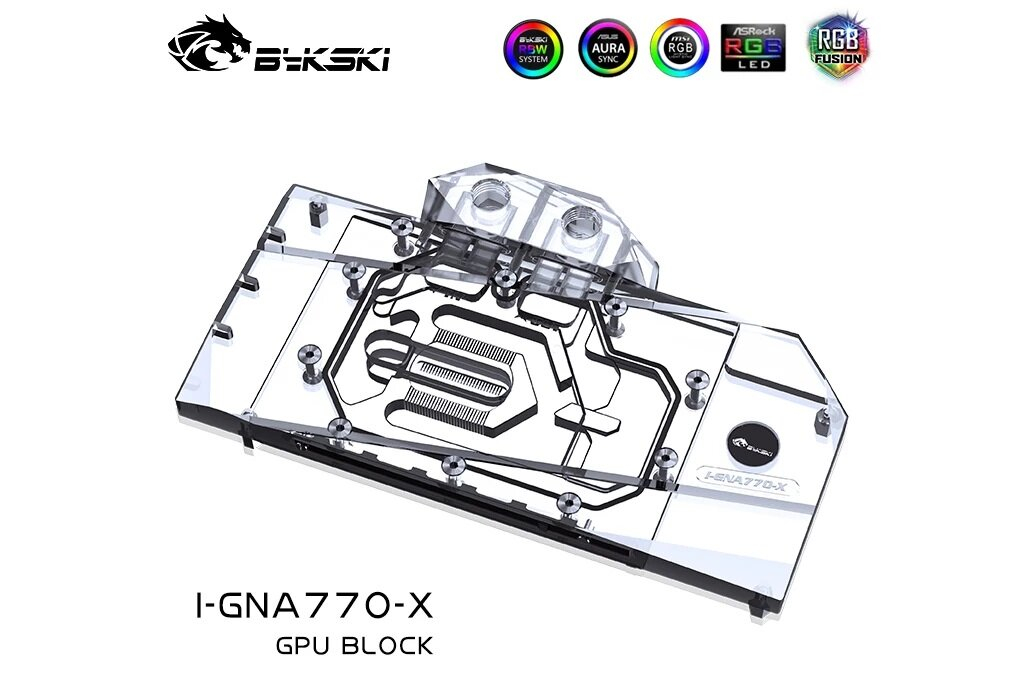 01/02/2023 at 07:15 a.m. by Valentin Sattler – After EKWB, Bykski has now also launched a full-cover water cooler for the Intel Arc A770. The new model is significantly cheaper than the competing product.

With the Arc graphics cards of the first generation, Intel was only able to meet expectations to a limited extent: the company has managed to enter the market to some extent, but the products still lag behind the competition in terms of efficiency and performance. Despite their positioning in the middle class, it is still worthwhile to offer full-cover water coolers for the Arc models. After EK Water Blocks announced corresponding models three weeks ago, Bykski is now expanding the range.

Specifically, Bykski now offers two full-cover water coolers for Intel graphics cards through the dealer EZ Modding. In addition to an already known model that is suitable for the Gunnir Arc A380, a water cooler for the reference design of the Intel Arc A770 is now also available. There is only explicit mention of support for the Arc A770, but the water cooler should probably also fit Intel’s medium-sized model – the Arc A750. This would make Bykski’s new water cooler a direct competitor to EKWB’s EK-Quantum Vector² Arc A750/A770.

However, the competition will probably not be quite as direct, because the Bykski model is sold for significantly less money. While EKWB charges 240 euros for the corresponding full-cover cooler, Bykski offers the A770 cooler for the same price as the A380 cooler: 140 euros are required. This makes the new model significantly cheaper compared to both the competition and the Arc A770 (~390 euros).

Finally on the topic: Intel Arc A750 and A770: EKWB with expensive water cooler

Unfortunately, it is still unclear to what extent this price difference will be reflected in differences in cooling performance. Since the Arc A770 is not too difficult to cool anyway, no relevant differences are to be expected. The equipment of the two coolers is also comparable: Like EKWB, Bykski also uses nickel-plated copper for the cooling plate, and again there is a cover made of acrylic glass with ARGB lighting. A backplate is also provided, even if no material is mentioned here. EKWB relies on aluminum at this point.

Those: EZ Modding (A770) via Videocardz

LEGO gives away an 80s space set on online purchases, here's how to get it

400 killed, 300 injured. Armed Forces worked on the base of the occupiers

God of War Ragnarok: The Behind-The-Scenes Finale – Developers Thank You