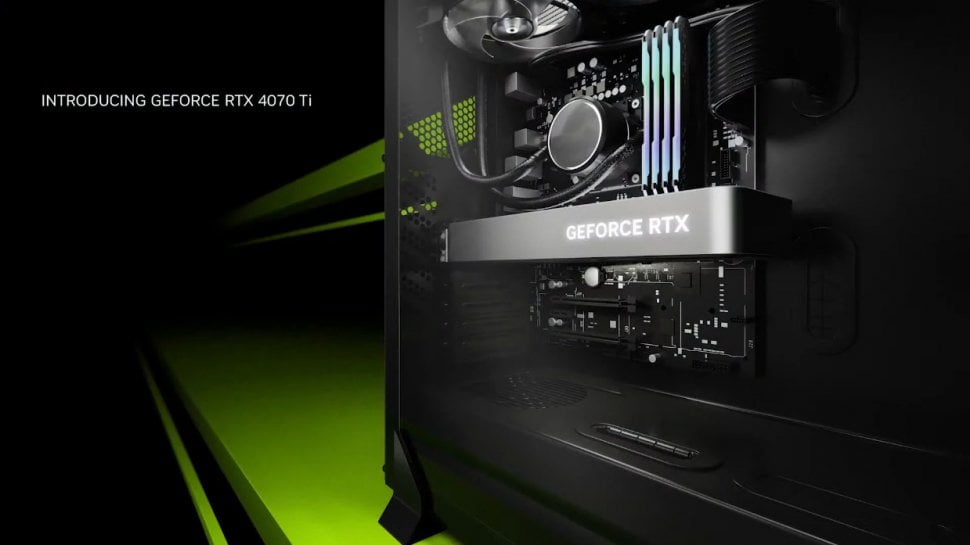 01/03/2023 at 17:49 by Andreas Link – The Geforce RTX 4070 Ti has now been officially announced and it should come as no surprise that it is technically the Geforce RTX 4080 12 GB that was withdrawn last year. Under the new name, it is now positioned more clearly in the portfolio and is 100 US dollars cheaper than originally planned.

Now the card gets a second chance as Geforce RTX 4070 Ti: The technical data are unchanged and therefore known: Nvidia combines 7,680 shaders with 2.3/2.6 GHz and 12 GiB GDDR6X memory for a price of 799 US dollars MRSP. That’s 100 US dollars less than was set last year – presumably a reaction to the sales situation for the Geforce RTX 4080. In Germany, Nvidia is asking 899 euros including VAT – noticeably less than the 1,099 euros once set.

The cards will consistently come to market as custom designs by the board partners; Nvidia does not provide a reference design for the Geforce RTX 4070 Ti that would guarantee the MSRP. The first models had already been leaked and the price is slightly above the RRP, but they also have a higher clock rate and higher performance limits than the 285 watts in the reference. Our preview video for the map proves to be correspondingly accurate in its statements due to the facts that were already clear in advance.

Sales start for the Geforce RTX 4070 Ti is January 5th. Tests should therefore appear soon and of course PCGH will also be there with measured values ​​and an assessment. It remains to be seen how good the availability will be at the start of sales.

In the presentation, performance values ​​were also presented by marketing, but we won’t go into them any further. The bottom line is that the Geforce RTX 4070 Ti is faster than the Geforce RTX 3090 Ti while consuming half the power. Officially, 40 TFlops raster performance and 93 TFlops ray tracing performance are mentioned; and 619 TFlops of the tensor units.

What do you think of Nvidia’s approach and the now adjusted price of the Geforce RTX 4070 Ti? Use the comment function and let us know what you think. You would need to be logged in to PCGH or the Extreme forums to comment. If you don’t have an account yet, you could consider registering for free, which has many advantages.

Free PC Games: The Evil Within 2 and 5 other games as a gift with Prime Gaming

Hitman - World of Assassination: Part 3 merges with its two predecessors

SpaceX launched 114 satellites simultaneously. Among them is the Ukrainian nanosatellite PolyITAN-HP-30, which was created at the Igor Sikorsky Kyiv Polytechnic Institute. Igor Sikorsky - Aroged