If you like using a powerful laptop for gaming, you can look forward to a significant performance boost on the GPU front in the future. On the occasion of the CES in Las Vegas, NVIDIA has now announced the new 40 series GPUs for notebooks. 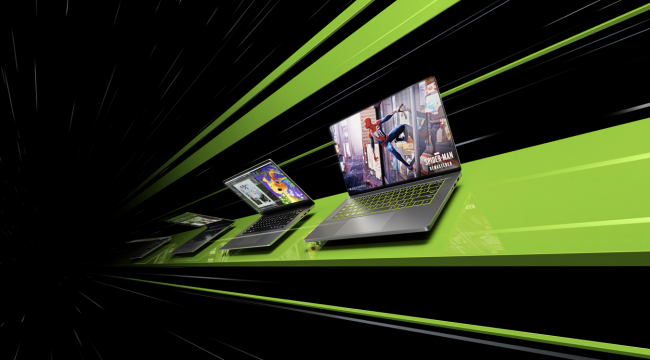 NVIDIA has announced over 170 laptop designs for gamers based on the new GeForce RTX 40 series at CES. These new GPUs rely on the highly efficient Ada Lovelace architecture, which, according to official information, embodies the largest generational leap in terms of performance and energy efficiency on these end devices. The new GPUs come in the above-mentioned large number of end devices from almost all major manufacturers.

What can you specifically expect? The RTX 40 Series laptops are said to be up to three times more energy efficient than the previous generation. Fifth generation Ada architecture, NVIDIA DLSS 3 and Max-Q technologies are also making their debut in laptops. In terms of performance, a quadrupling should be possible compared to previous AAA games like Cyberpunk 2077.

Far away from gaming, creative people should also benefit from the new generation. These are offered high acceleration in exclusive studio apps such as Omniverse or Blender.

The new RTX 4070, 4060 and 4050 series notebooks are faster than the previous generation flagship models. Prices for these notebooks start at $999 and will be available on February 22nd.

Cyberpunk 2077 is said to be even more beautiful, improved by the new Ray Tracing: Overdrive mode and up to 4x performance increase with NVIDIA DLSS 3.

Medieval action game Warhaven will get support for DLSS 3

Starfield: Prepare your spaceships, the game arrives in the first half of 2023, confirms Bethesda

Aroged: Dead Space remake went to press, release – at the end of January

The next game from the creators of Genshin Impact coming soon?