The best LED backlight for PC

Which LED backlight to choose depends on your requirements and requests. You can buy a single color LED strip, such as white, or you can get an option that constantly changes the colors of the glow.

There are simple self-powered backlight tapes available on the market (for example, from batteries) and a control panel: such a backlight can be placed inside the PC case or outside, bring the remote control to a place convenient for you and control the backlight from it. 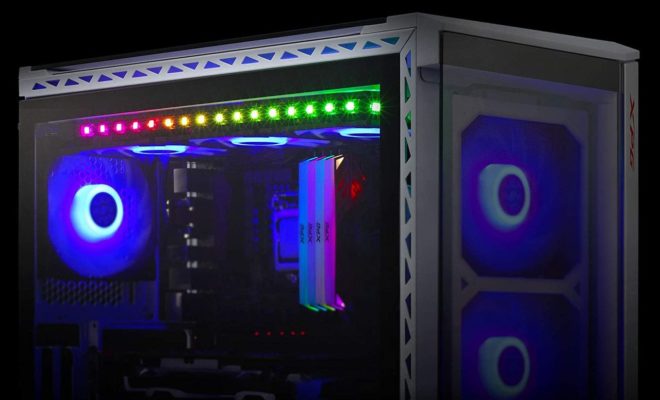 There are also options that integrate with and sync with the PC lighting system. These LED strips are powered by a power supply (usually SATA or Molex connectors are used) and connected to the appropriate backlight control connectors on the motherboard or hub. When buying such an LED backlight, it is important to study its characteristics and make sure that they correspond to the capabilities of the motherboard: it is necessary to comply with the requirements for the voltage supplied to the backlight so as not to spoil it.

So, here are the best LED lights for creating a brighter and more inviting atmosphere around your gaming setup that you can purchase right now. 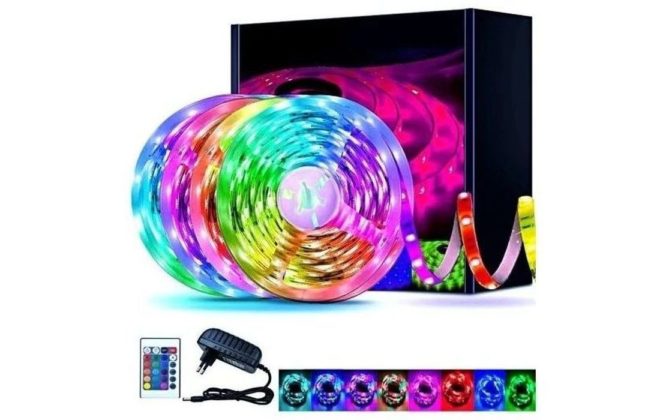 The easiest option that can be purchased for a PC and not only – SMD 5050 tape is suitable for decorating a gaming table, the back of a monitor and other places that your imagination is enough for. You can also connect several of these ribbons in series to lengthen the backlight or create some kind of complex pattern from it.

At the same time, the low price of the model affects its quality: you should not even think about synchronizing the backlight with the illumination of your PC, and the power supply components are rather unreliable and can fail. Therefore, when buying SMD 5050, do not place too much hope on it. 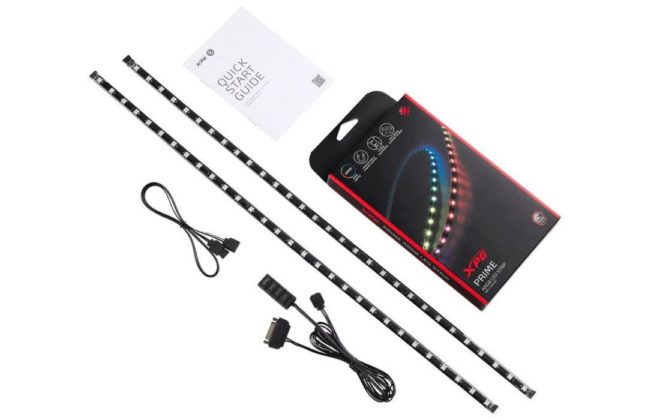 XPG ARGBSTRIP-BKCWW is a product that gives you total freedom to control your PC backlight.

You can connect it to the SATA connector and ARGB connector on the motherboard (do not forget to set the jumper on the connector to 5V) to synchronize the LED strip lighting with other computer components, or if you do not have free ARGB connectors, use the included remote control , which can be pulled out of the case and used to manually switch modes and colors. You can also daisy-chain multiple XPG ARGBSTRIP-BKCWW strips if needed.

This backlight is compatible with most motherboard software, so you don’t have to worry that it won’t fit your PC. The model combines high-quality LEDs, magnetic mount and silicone protection, and you will find some funny stickers in the kit. The only drawback of LED-backlighting is its price, but this is a price for excellent quality. 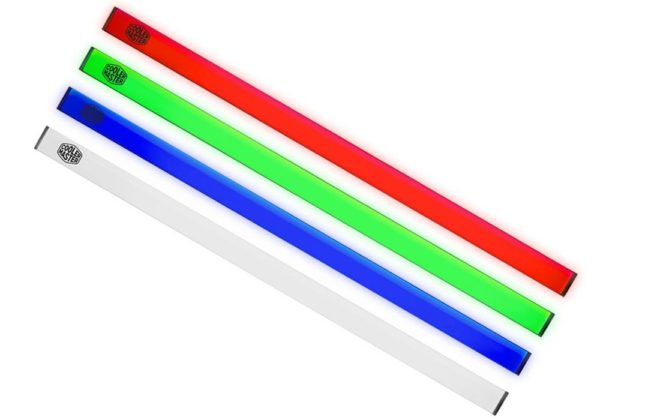 The Cooler Master Red LED Strip backlight has the sole purpose of glowing. This model is designed for use in a PC, so it is powered by a SATA connector and has magnetic mounts that allow you to install it inside a metal case.

The bundled backlight power cable is thin enough to disguise it, and two connectors are required for power, given that the model consists of a pair of LED lamps. However, you can use each of them separately if you wish. 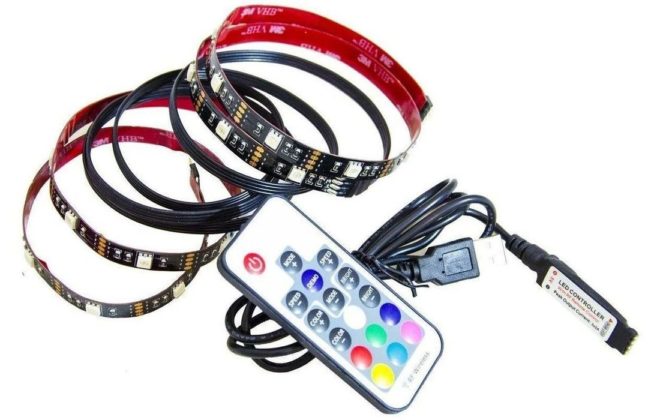 Tape Apeyron 10-70-AB is designed for mounting on a TV, monitor or PC case. It is powered by a USB connector, so it does not require replaceable batteries or other power sources.

The kit includes a wireless remote control with which you can switch the glow modes, adjust the color and flicker speed. However, you will not be able to control the backlight using your PC’s motherboard. 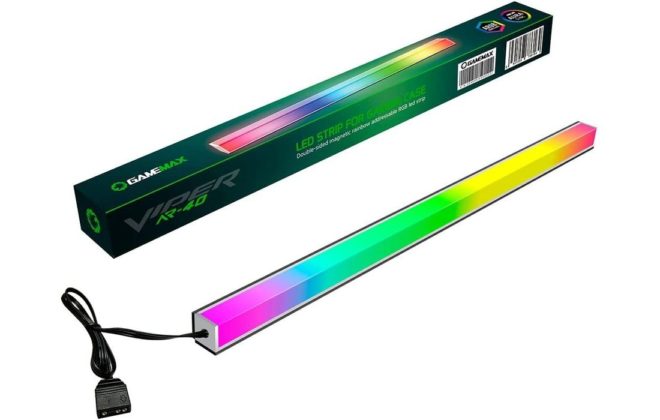 GameMax Viper AR40 is not so much a tape as a whole lamp equipped with 40 ARGB LEDs, which allows you to realize bright illumination when connected to a PC.

This model does not have an external controller, so the backlight is controlled by the motherboard when connected to a 3-pin connector with a voltage of 5V. The length of the lamp is 40 cm, and the 50 cm cable allows you to place it anywhere in the interior of the case. Attaches the device with magnets. 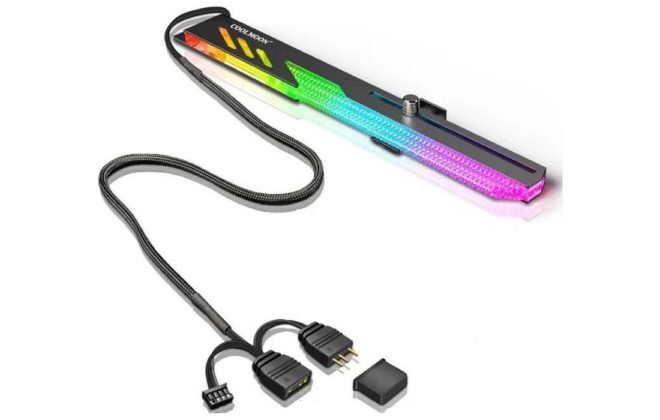 COOLMOON GT8 is not an LED strip, but this gadget will not only decorate your PC, but also bring benefits. This is a graphics card holder that is used to support bulky video adapters that sag and buckle under their weight.

Most often, these holders produce a placebo effect for paranoid gamers who think that their video card is too heavy, but in some cases they really become useful, especially if your PC has a monstrous three-slot adapter with a powerful cooling system.

This model is made of durable aluminum, and is attached to the case to support a horizontally mounted graphics card along its entire length. At the same time, COOLMOON GT8 is equipped with an ARGB backlight, which is connected to the motherboard connector with a voltage of 5V and can be synchronized with the illumination of other computer components. 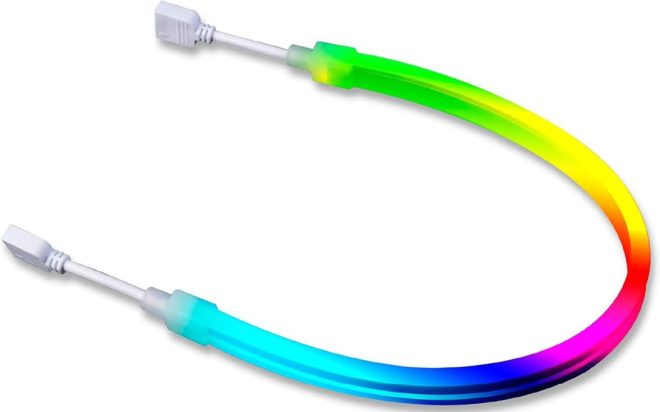 Akasa Soho MBA ARGB is an addressable LED strip that is compatible with a variety of motherboards and PC illumination control applications. It can be synchronized with other accessories, and thanks to its flexible shape and built-in magnets, you can attach it in any position inside your computer case. 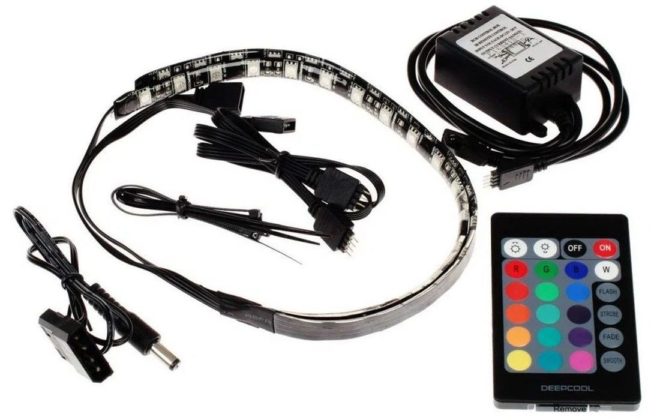 Flexible LED strip with a wide range of connection options: it can be used both inside the PC case, powered by a Molex connector, and outside it, using the included mains adapter.

The device can be connected to the motherboard and control the backlight using its means, or you can use the control panel with which you can adjust the color, modes, brightness and intensity of the backlight. A versatile option for a variety of scenarios. 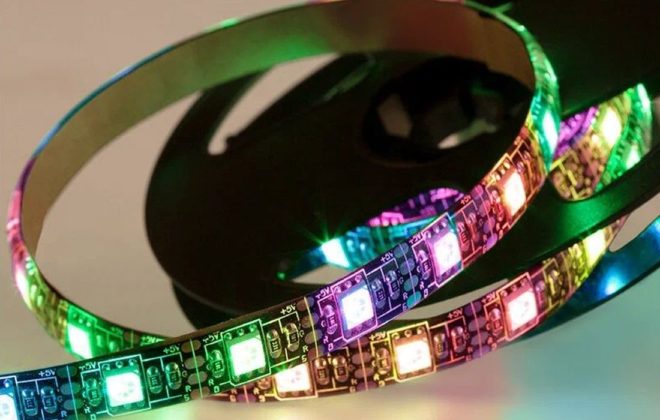 LAMPER RGB is an inexpensive and easy option for decorating PCs, TVs and other interior items. All you need to use this LED strip is a free USB port from which it draws power.

The device is equipped with 60 LEDs, fastened with a self-adhesive base, and controlled from a complete remote control that allows you to select the modes and color of the backlight. You cannot synchronize this tape with computer components, but you will certainly be satisfied with its low cost.

Philips Hue LightStrips Plus is a smart home tape that works in an ecosystem of various smart devices, including those with support for Yandex Smart Home. It can be placed in a room, including inside a PC case, and controlled from a smartphone or even give voice commands. 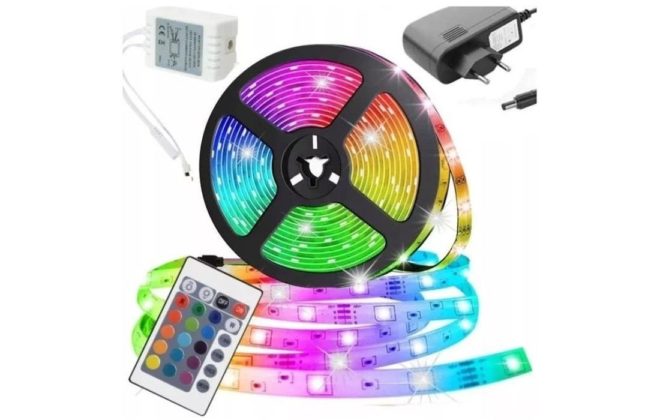 Another affordable and unfussy option for decorating the space inside and outside the PC. This is a five-meter strip for 270 LEDs, which is powered by a source with a voltage of 12V or 220V (there is an adapter included) and is configured using the remote control.

Samsung sale: the Galaxy Tab A8 tablet is at the lowest price with this Amazon flash sale

Will the miner agree? Arsenal offer 50+ million euros for Mudrik

Neil Druckmann warned players to be careful with "insider" information

Assassin's Creed: the Netflix TV series has lost the showrunner for "vision differences"

One Piece Odyssey: Demo version lets you go before release

The Ghost of Watermelons