Since the beginning of 2023, the OLED gaming monitor market has received a strong boost. In particular, Acer introduced two new models in the well-known Predator series – X27U and X45, both received OLED screens with a resolution of 1440p. New items equipped with 27- and 45-inch displays, respectively, the larger version has a curved display. The announcement took place just before the opening of the CES exhibition. 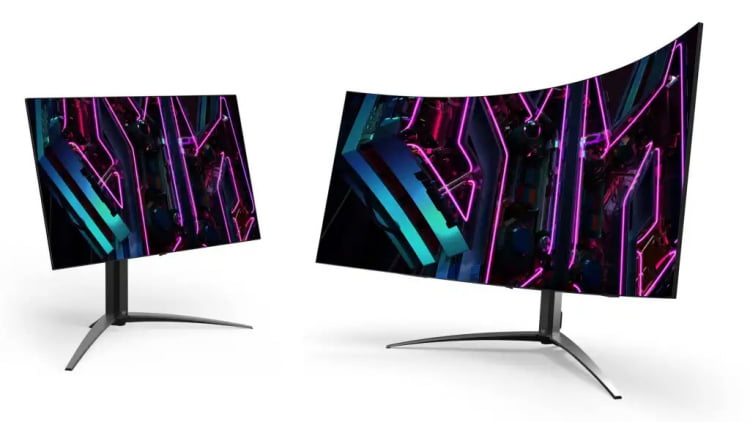 The X45 certainly makes a bigger impression as it uses a really impressive display size. The resolution is 3440 × 1440 pixels, which is quite standard for gaming curved displays of this format. Experienced users will also be impressed by the curvature of the 800R screen. However, such monitors have a rather narrow scope, and competitors from Dell and Asus still prefer to offer options with a large coefficient of curvature – this makes them less “curved”.

The OLED panel is capable of displaying 98.5% of the DCI-P3 color space and delivers a refresh rate of 240Hz. Peak brightness is 1000 cd/m2. The response time is 0.1ms, which should be enough for most games and gaming hardware combinations. The model is compatible with AMD FreeSync technology and has an integrated USB Type-C KVM switch for quickly changing the signal source, for example, from a laptop to a desktop computer.

The X27U is much more modest and has a more budget panel with a resolution of 3440 × 1440 pixels. However, the novelty uses almost the same technology and connectivity.

Both monitors have thin bezels and tripod stands. Sales are expected in the second quarter of 2023, in China they will appear in retail a little earlier than in other markets. The Predator X27U will cost $1,099, while the X45 will cost $1,699.

Elon Musk's SpaceX Will Take Tourists Around the Moon This Year

Japanese developers choose Elden Ring, Splatoon 3 and God of War Ragnarok as the best games of 2022