After the news for the ROG gamer line, ASUS returned to the CES 2023 stage to make official news in the notebook market. The Taiwanese manufacturer announced new models of commercial, professional and gamer lines.

In total, there are nine new laptops, from the Zenbook, Vivobook, Expertbook, Chromebook, ProArt and TUF Gaming families. TudoCelular covered the company’s conference and details the news for you. 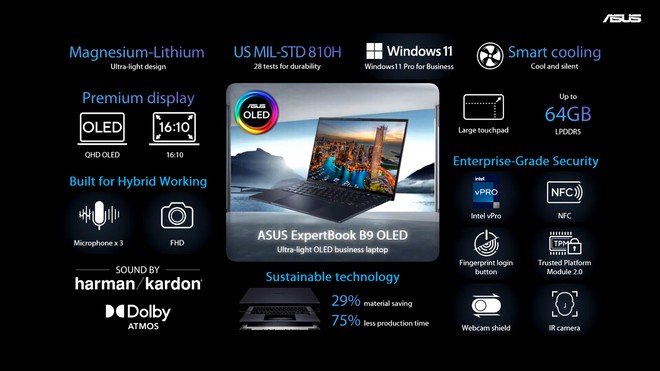 Designed for sustainability, it is the first zero-carbon laptop made by ASUS for the business market. It has a 14-inch OLED screen, with a lighter body than the 13-inch ones, in addition to having a 16:10 aspect ratio and 90% frontal use.

This notebook features an additional fan to allow for 36% more TDP without overheating, as well as MIL-STD 810H certification for endurance. The model comes equipped with 13th generation Intel Core processors, in addition to having a larger touchpad. 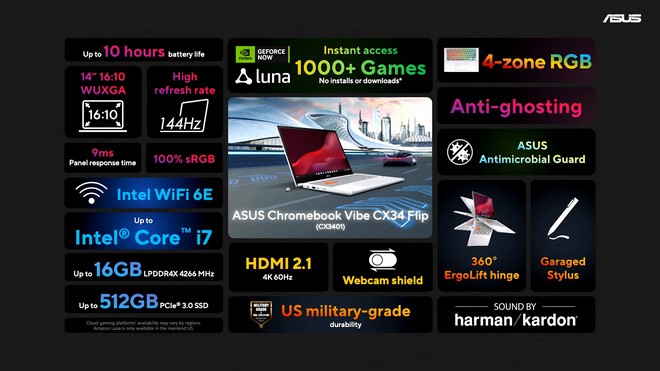 The new Chromebook Vibe CX34 Flip comes equipped with a WUXGA resolution display with a 16:10 aspect ratio. It has a 144Hz refresh rate and has an 83% screen-to-body ratio.

The keyboard has an orange finish on the WASD screens and four-zone RGB lighting, plus a rugged MIL-STD 810H military-certified chassis. The hinges can transform the product into a tablet, to be used with the stylus present in it.

Internal configurations consist of an Intel Core i7 processor and 16 GB of RAM, in addition to SSD storage. It supports NVIDIA GeForce Now if you want to play games on this device. To complete, the battery has autonomy of up to 10 hours away from the socket. 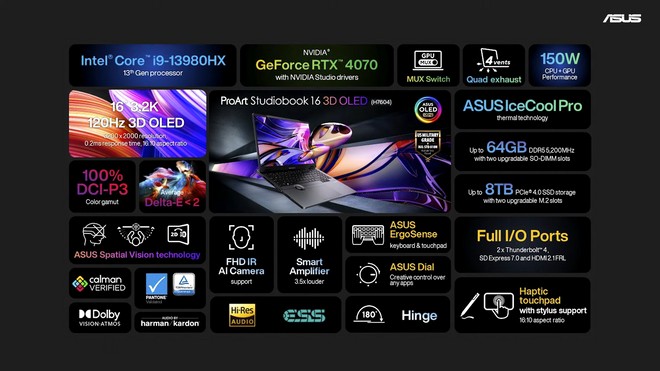 Designed for creators, the ProArt Studiobook 16 3D OLED stands out for the presence of ASUS Spatial Vision technology, which allows the conversion of 2D content into immersive 3D in real time, without the need for glasses.

The device has a gradual design for thinner screen bezels and rear air vents. The screen lies flat and offers a 180-degree viewing angle. It features IceCool Pro thermal technology, ASUS Dial for intuitive and precise control, and dual Thunderbolt 4 ports with transfer speeds of up to 40Gbps. 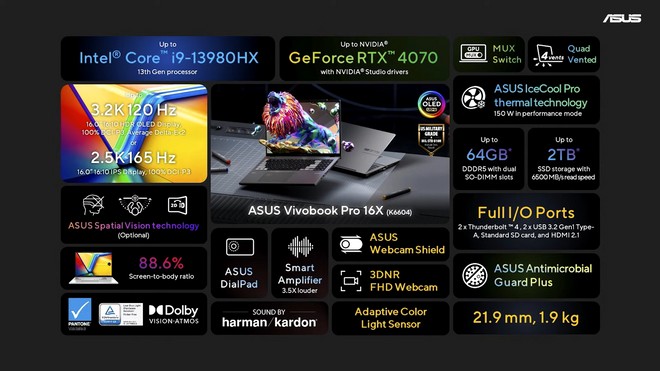 The Vivobook Pro 16X 3D OLED arrives with a 16-inch panel and focuses on creators, since there is ASUS Spatial Vision technology, with a 3.2K resolution OLED 3D screen, not counting the 120 Hz refresh rate.

Inside, this Vivobook is powered by an Intel Core i9-13980HX processor and NVIDIA GeForce RTX 40 Series graphics, accompanied by MUX Switch and NVIDIA Studio driver support. 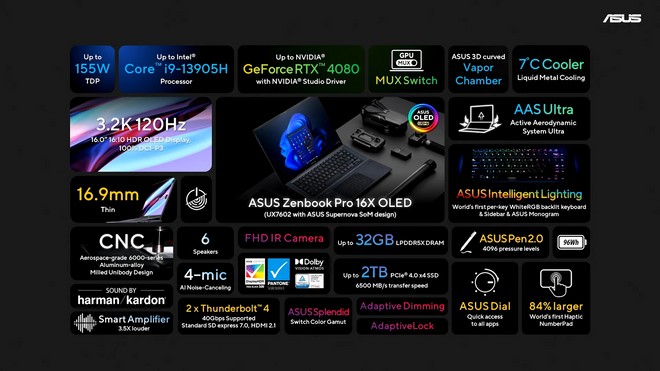 This model even comes with an intelligent RGB white lighting system, the ASUS Dial with precise creative control, and a larger ASUS NumberPad with haptic feedback for greater sensitivity. 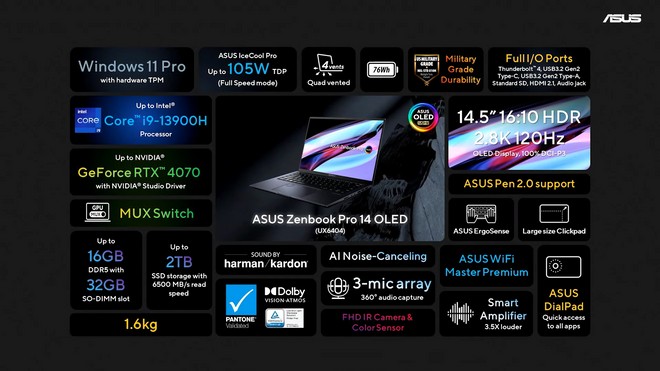 The OLED NanoEdge display supports Dolby Vision and HDR, is Pantone validated for color accuracy, and has a gamma of 100% DCI-P3. The resolution is 2.8K, with a refresh rate of 120 Hz.

Configurations include an Intel Core i9-13900H processor and NVIDIA GeForce RTX 40 Series graphics, accompanied by 16 GB of RAM and 2 TB of SSD storage. To complete, there is a 76 Wh battery that promises long life. 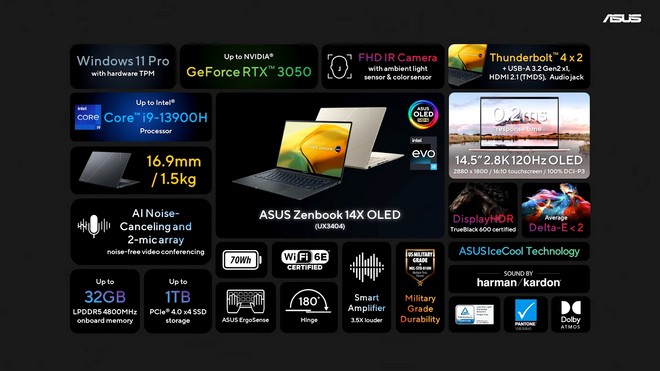 The Zenbook 14X OLED is yet another notebook model made official by ASUS with a thin and light chassis, with Sandstone Beige and Inkwell Gray color options. In the case of the former, the highlight is the cover made by an eco-friendly electrolytic and plasma oxidation (PEO) coating technique, with a ceramic finish and stone feel.

It features a 14.5-inch OLED HDR NanoEdge display with a 16:10 aspect ratio. The manufacturer has entered a 2.8K resolution and a refresh rate of 120 Hz. In addition, the battery has a capacity of 70 Wh, for greater autonomy. 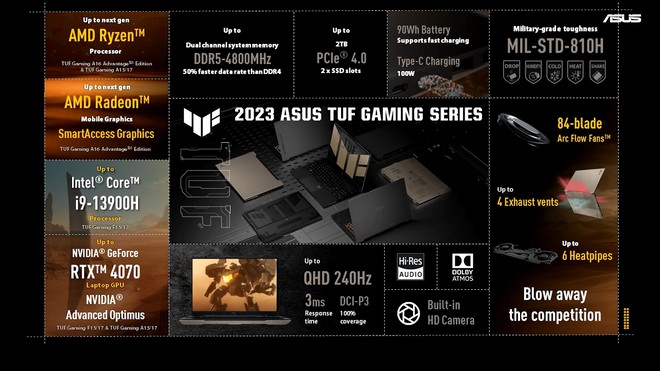 ASUS also presented three notebooks from its gaming line, TUF Gaming. The A16 Advantage Edition comes with an AMD Ryzen 9 processor with Zen 4 architecture and a Radeon GPU with RDNA3 architecture. The panel has 90% front utilization, Quad HD resolution and 240 Hz refresh rate.

This model also supports USB 4, up to 2 TB of internal space per PCIe 4.0 SSD and slots for DDR5 4800 MHz RAM memory. The 90 Wh battery has a large capacity and can be charged via USB-C with PowerDelivery. The sound supports Dolby Atmos and Two-Way AI Noise Cancellation.

The difference between them is that the F15 and F17 duo have an Intel Core i9-13900H processor, while the A15 and A17 are powered by AMD Ryzen 9 with Zen 4 architecture. 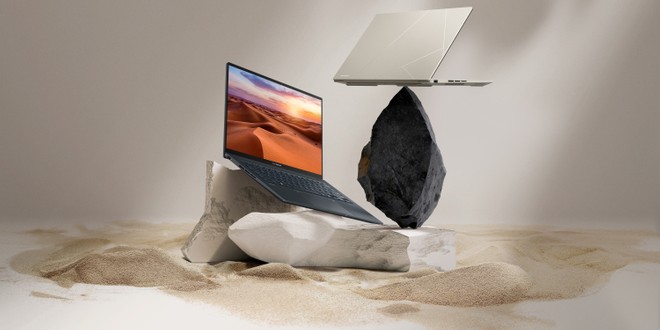 As of now, ASUS has yet to reveal pricing and availability information for these notebooks. There is also no confirmation for now of which models will land in the Brazilian market.

So, what do you think of the new ASUS laptops in the brand’s different lines? Leave your opinion in the comments below.

In the new season of Tanks Blitz, players are waiting for the battle with the Central Processor