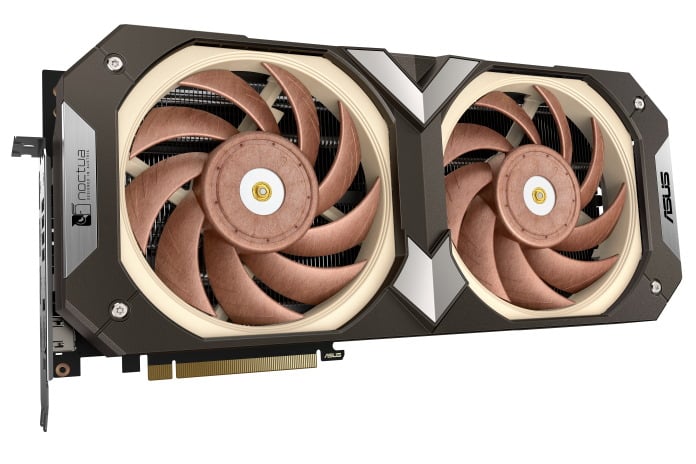 After the first information about a new graphics card from Asus and Noctua appeared in the rumor mill in December, Asus has now officially announced the model as Geforce RTX 4080 Noctua OC Edition 16GB GDDR6X (RTX4080-O16G-NOCTUA). As with the already known Noctua editions of the Geforce RTX 3070 and 3080, the Austrian cooling specialist’s brown-beige color scheme and a design with two 120 mm fans from the NF-A12x25 model are used.

Constructed from Noctua’s proprietary Sterrox liquid crystal polymer, the fans have an exceptionally low coefficient of thermal expansion, allowing the fan blades to sit just 0.5mm from the outer frame. This tight tolerance allows the NF-A12x25 to work more efficiently against back pressure by reducing airflow leakage, making the model perfect for a densely packed GPU fan stack, according to Asus.

Meanwhile, what is new is that the cooler with backplate takes up a total of 4.3 slots and thus takes up even more space than the already bulky designs of the RTX 4080. With this, Asus and Noctua want to be able to offer the “quietest graphics card in its class”. An extended vapor chamber with eight heat pipes should also contribute to this.

The card also still ships with a dual BIOS switch, with Quiet mode enabled by default and a Performanc mode still available. Also on board are a 0 dB mode, which only allows the fans to rotate above a certain temperature, and Asus’ optional GPU Tweak III software for adjusting and monitoring the performance data.

With a TDP of 320 watts for the Geforce RTX 4080, the Noctua Edition should reach a maximum temperature of 61.7° Celsius, according to Asus, “and with the same extremely low noise levels” as the Noctua variants of the Geforce RTX 3070 and RTX 3080. Some technical data, such as clock and co., have not yet been announced.

To ensure that the Geforce RTX 4080 Noctua Edition runs optimally, Asus recommends using it in conjunction with one of its own “premium power supplies” ROG Thor 1000P2 or ROG Loki 1000P with 1,000 watts. There is no information on price and availability yet. In its announcement, Asus refers to its local company representatives. Meanwhile, there’s no mention of a possible RTX 4090 as a Noctua edition, as originally suggested, or even the new RTX 4070 Ti.

Elden Ring breaks record for most Game of the Year awards

The Witcher Remake is reality: the first chapter of the series in development on Unreal Engine 5

Antoine Daniel is a hit with Geoguessr and Minecraft stronger than ever: The highlights of the week on Twitch