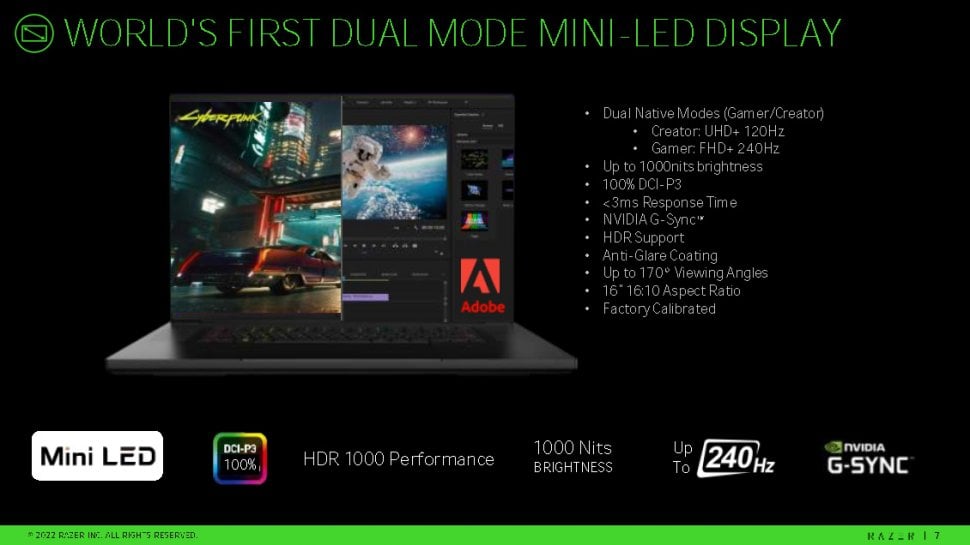 January 5th, 2023 at 7:01 p.m. by Manuel Christa – For CES 2023, Razer is updating its high-end notebooks from the Blade series with the latest Intel CPUs of the 13th core generation and Nvidia GPUs from the RTX 4000 series. In addition, other details are being worked on, such as the display. The Blade 16 is to replace the Blade 15 and offer a display with a new type of dual mode, i.e. either UHD+ with 120 Hz or Full HD+ with 240 Hz. The Blade 18 is the three-kilo flagship with the greatest possible graphics performance and other features such as six speakers, a 5 MP webcam and numerous ports.

The new Razer Blade 16 gets a dual-mode mini-LED display that allows you to switch between UHD+ with 120 Hz and FHD+ with 240 Hz. The panel, probably an IPS, is also equipped with the currently best possible HDR for notebooks, i.e. it has a peak brightness of up to 1,000 cd/m² and local dimming zones via mini LEDs. Nothing is known about the number of zones. In addition, the DCI-P3 color space is covered 100 percent, G-Sync is supported and the display is calibrated at the factory. The response times should also be less than three milliseconds.

The new Razer Blades are said to have the new 13th core generation of Intel processors. The Blade 18 should be the new top model i9-13950HX, with up to 5.6 GHz, eight P and 16 E cores. According to Intel press information, the single-core performance of the new i9-13950HX is eleven percent higher than that of the i9-12900HX and the multi-core performance is even up to 49 percent stronger. Only a “Core i9 13th Gen” is mentioned for the Blade 16, probably an almost identical model with a slightly lower clock.

Both models should have the “maximum possible TGP”. In the case of the Blade, the statement applies with the restriction to 16-inch notebooks. This means that the new, currently unknown, Nvidia graphics chips of the RTX 4000 laptop series can (but do not have to) be operated with the highest possible performance. At least from last year’s models, we know that Razer likes to use high-clocked Nvidia GPUs, which do a lot, but are also noisy. It is not yet known when the new Razer Blades will be launched. The Blade 16 will start at $2,699.99 and the Blade 18 at $2,899.99, according to Razer.

The Day Before: 10 Minute Gameplay Trailer Is Here, But Are the Concerns Gone?

Aroged: The head of the CIA called the next six months of hostilities in Ukraine “critical”

Hades 2: How is development progressing? Supergiant works on translations, there is also Italian

Lollipop Chainsaw Remake is back: is this the 'new' Juliet Starling?

Buy PCs and laptops from 299 euros at Aldi - not just Medion!

Unbelievable: This triple-A game is supposed to be the next free game in the Epic Games Store

Alexandra MERKUSHINA: “No Russians and Belarusians in the international arena”