AMD used the most recent keynote at CES 2023 to present plenty of new chips. In addition to the first three Zen 4 CPUs with 3D V-Cache and next-generation laptop processors and GPUs, AMD also confirmed the new 65 W CPUs of the Ryzen 7000 series, the specifications and prices of which have been announced for some time are no longer a secret.

According to AMD, these processors are optimized for both efficiency and performance and are sold together with the manufacturer’s Wraith cooler. The three new CPUs are the Ryzen 9 7900, the Ryzen 7 7700 and the Ryzen 5 7600. In terms of gaming performance, these processors are said to be superior to the respective Zen 3 predecessors with the X suffix (images with Comparative values ​​can be found in the picture gallery).

The most powerful CPU of the new 65 W guard is the Ryzen 9 7900, which has 12 cores and 24 threads. The processor is said to have a base clock of 3.7 GHz and a turbo clock of up to 5.4 GHz. The Ryzen 9 7900 should be able to convince with a total cache of 76 MiByte. Meanwhile, AMD promises that a water-cooled model should be able to deliver an immediate performance increase of up to 39 percent via the One-Click-OC with Precision Boost Overdrive. There is no more specific classification of this data. The Ryzen 9 7900 will be available with the Wraith Prism RGB cooler from January 10th (on the product page from January 14th) for an MSRP of $429. 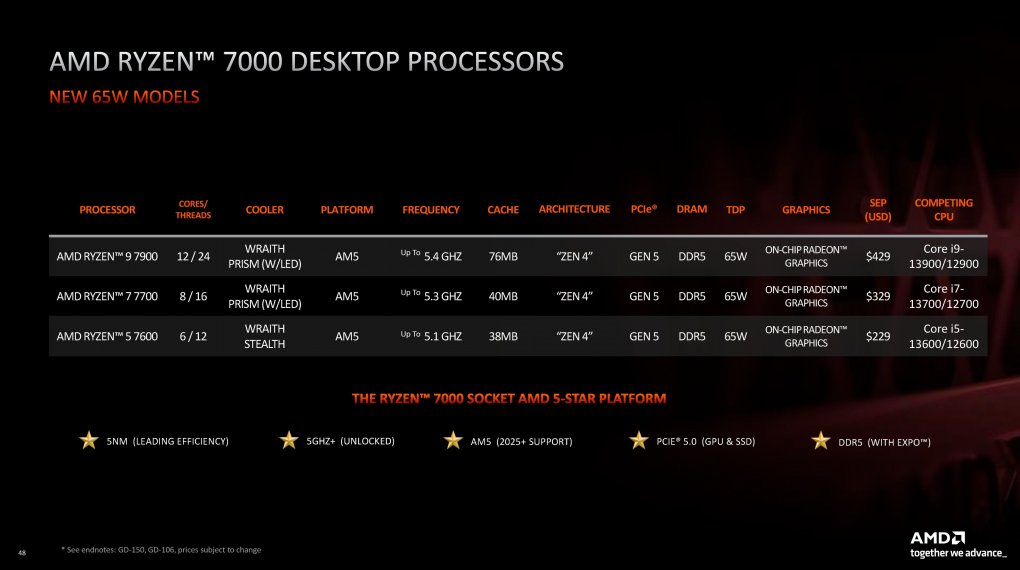 Suitable for this: AMD Ryzen 7000: Almost all models are available at the lowest price

That leaves the smallest 65 W CPU in the bunch, the Ryzen 5 7600. This one still has 6 cores and 12 threads and a total cache of 38 MiByte up its sleeve. The base clock is 3.8 GHz and the turbo clock is up to 5.1 GHz. Compared to the Ryzen 9 7900 and Ryzen 7 7700, the Ryzen 5 7600 “only” comes with a low-profile Wraith Stealth cooler without RGB lighting. This CPU can also be overclocked and, according to AMD, was made for “intensive gaming”. List price is $229, also available January 10th and 14th respectively.

Massive leak of new characters from Fontaine in Genshin Impact

Apparently, the updated The Witcher 3 will be released on disks at the end of January

Call of Duty: Microsoft ready to solve the problem once and for all to ensure the takeover of Activision Blizzard!