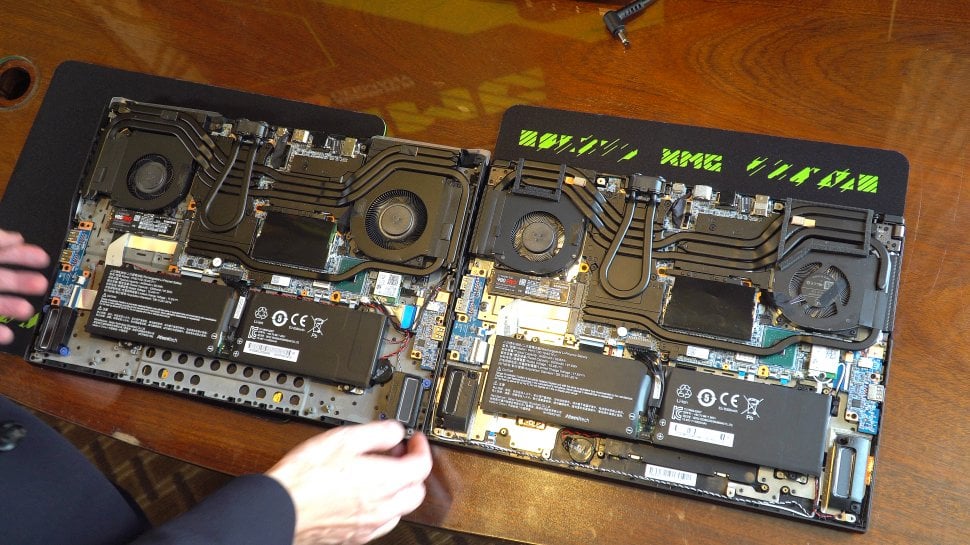 01/06/2023 at 03:00 a.m. by Manuel Christa – We really didn’t believe in the success of XMG’s external notebook water cooling system, but the opposite was proven to us at CES 2023. Many buyers of a core or neo notebook also purchase the Oasis water cooling system, so that Schenker Tech from Leipzig is now launching the third revision of the XMG Oasis, which has now been improved with the “MagSafe” magnet connection and other upgrades.

A magnet connection should be safe enough for water cooling hoses? This sounds like an unstable device at first, but on closer inspection it looks quite reliable in the presentation. Because both sides of the connection, both the hose and the entrance to the notebook, are automatically sealed when pulled off. Like a washing machine hose, there is a kind of aquastop here, even if the technology works differently here. The Oasis is now equipped with a water flow sensor that closes the hose when nothing is flowing.

In previous models, XMG used different (mechanical) keyboards in the XMG Neo, most recently the self-developed one with “opto-mechanical” keys. For the first time, there will be two different technologies in the shop configurator: either conventional membranes, which are almost silent, or a mechanical and correspondingly audible Cherry MX with tactile Ultra Low Profile (ULP) switches. Both have identical keycaps, so you can’t see the difference, you can only hear it.

This year there will also be the XMG Neo in 16 and 17 inches, both with WQHD displays in 16:10 format and with 240 Hz. In addition, there is now full G-Sync with Advanced Optimus. As in other XMG models, the i9-13900HX is now exclusively used here – even in the cheaper and smaller models. In contrast to the predecessor, the price-performance ratio has improved significantly, which is why XMG only uses the i9 from the Raptor Lake generation.

And what about AMD and Intel in Schenker and XMG notebooks?

While AMD was more involved than Intel in the last generation, AMD CPUs in notebooks of the Ryzen 7040 series have not yet been announced. The AMD GPUs in notebooks are also only sparsely found, since AMD either lacks availability or manpower.

With the Intel GPUs, things could still get a bit exciting in the middle class: The Arc GPUs have already scored in desktop graphics cards with quite good efficiency and value for money, which is even more important in notebooks than in PCs. Schenker representatives have shown an unnamed prototype based on an Intel NUC design, which is equipped with an Intel Arc A730M (12 GB), an i7-12700H and DDR5-4800.

POTTER: "We are disappointed with the loss, but I am pleased with the young players"

PS5: Sony celebrates its best-selling month to date and the next big milestone

Where to find the real Tyr in God of War: Ragnarok

WoW: The cuddly Ardenwald Pepe is now available in the Blizzard Gear Store