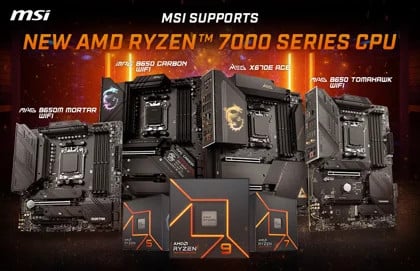 01/08/2023 at 12:30 p.m. by Maximilian Hohm – MSI took the AGESA updates for its AM5 boards offline after a short time. So far, these seem to have a problem with the Ryzen 5 7600X, so that affected systems can no longer boot. Read below what the AGESA updates are for and what alternatives currently exist.

AGESA microcode has regularly been a controversial topic on the AM4 platform in the past. While some users really liked AMD’s constant improvements, others criticized the frequent updates intended to fix existing bugs and add new features. Nevertheless, they are particularly important for platforms that come with many CPUs that come onto the market one after the other. The same is now emerging for the AM5 platform, which has now received the second round of processors.

AMD’s Ryzen 5 7600, Ryzen 7 7700 and Ryzen 9 7900 do not ultimately differ from their desktop counterparts with the X suffix, but each offer a standard TDP of 65 instead of 105 watts. The microcode is updated so that the mainboard can still recognize the new processors. Specifically, the AGESA Combo PI-1.0.0.4 is used for this. MSI has meanwhile announced in a press release that the new chips will be fully compatible with their own mainboards as soon as they are launched thanks to the AGESA update.

When exactly the update will come back, however, is not announced and also has a good reason. The microcode update does not seem to be compatible with all Ryzen 5 7600X so far and will therefore probably be revised again. Meanwhile, MSI also offers an option for those who don’t want to wait until the 65-watt chips. In the EZ-OC tuning features, you can not only select PBO and a preselection by performance switch, but also use the Config TDP feature. As the name suggests, this mode limits the TDP of the processors to selected values. Profiles with 45, 65, 95, 105, 125 and 170 watts are stored as standard, so that suitable options are available for almost every application scenario.

The great history of the Nintendo DS!

Opening NieR: Automata Ver1.1a: video, text and how to download

Klim PRIKHODKO: “UPL is a much higher level”

No despondency. Poland in Qatar showed the best result in the last 36 years