Despite the arrival on the market of an increasing number of handheld devices for mobile gaming in its most varied forms, including cloud gaming, local playback and emulation, the Steam Deck has managed to obtain its large share of users and continues to catalyze the interest of players from all over the world not so much thanks to its performance, but more for its completeness and ease of use.

At launch, the console of Gabe Newell and associates boasted an almost infinite library thanks to the compatibility substrate made possible by Arch Linux and the SteamOS customization, further refined and finally ready to return an immediate and intuitive “console-like” interface, in addition to the support of Valve and its constant commitment to verifying the compatibility of outgoing titles and the catalog already available, identifying the “perfect” games for Steam Deck with a green check: but which ones were the most significant of 2022?

Miyazaki’s latest effort under the aegis of George RR Martin needs no introduction. The real surprise, if anything, is finding – and being included – Elden Ring in a ranking of the best titles to play on the go. Absolute star performer of 2022 in a broad sense, From Software’s masterpiece defends itself in an extraordinary way even against Valve’s jewel, thanks to a specific optimization that allows you to fix frame pacing problems guaranteeing 30 FPS at low detail and at 720p, a result superimposable to that offered by old-gen consoles (PS4), except for the resolution. Surprisingly enjoyable, it will not fail to show frame drops here and there, without however compromising the overall experience for those who want to beat her even on public transport.

Among the surprises of the last twelve months and not only for mobile gaming, there is the transversal jewel born from the mind of Ben Esposito and the masterful commitment of the guys from Annapurna Interactive. We talked about it in our review of Neon White, but it is a crazy, irreverent and extraordinarily dynamic game, focused on constantly challenging the user with a unique gameplay between platform and FPS, perfect both from the couch and on the go. Its skeleton is optimized enough to be played locally even on Steam Deck, where it finds perhaps one of its best applications thanks to the level structure and its easily adaptable nature even for healthy occasional use trying to improve times and scores. If you haven’t already done so, recover this title of absolute value, one of the pearls of 2022 that has just passed.

Fresh winner of the title of Indie of the year at the TGA, Stray places the double for Annapurna among the most interesting games of the year and also in this special ranking. An exquisite gameplay, based on the four-legged exploration of a cyberpunk city orphaned of all its humanity between purrs and meows, will lead us to chase the light to return to the open air while trying to find out what led to the decline of the era of man and the reconquest of the world by nature. Catapult yourself into this extraordinary world if you haven’t already. We have already tested Stray on PC, Steam Deck and PS5: a short but intense adventure that will not fail to give you a few hours of priceless entertainment. On the Valve console it can be played to the maximum, but even by greatly limiting the resources to optimize autonomy it is possible to bring out a decent experience with medium graphics thanks to AMD scaling.

Having now become a cornerstone of the genre, Cuphead was and remains a must for Steam Deck, especially after the release of the appetizing 2022 DLC which further certifies its success and which we told you about in the review of Cuphead The Delicious Last Course.

Its technical requirements are quite low, so it will be possible to play easily even on the “small” portable console from Valve without necessarily sacrificing autonomy or visual quality. On Steam Deck, performance is guaranteed, being a “perfect” game complete with a green check, and it is also possible to come up with good-level gameplay with a high framerate (obviously maximum at 60 frames per second) and low latency, to unleash the best of your skills anywhere, anytime – or between courses. 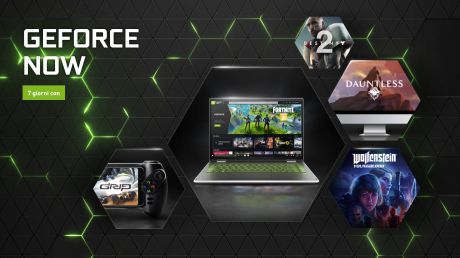 We decided not to dedicate the last parenthesis to a particular game but to the services that have done their utmost to find their space on the Steam portable platform from the beginning, finding workarounds and thus providing us with handy tutorials to access them. We’re talking about Xbox Cloud Gaming and GeForce NOW, with which you can play your favorite titles directly in streaming by taking advantage of the superior performance of Microsoft Azure datacenters and NVIDIA SuperPods. In particular, in the last year we have experienced an extraordinary period of improvement both in terms of performance of the original machines and of transfer and interaction with our terminals. In recent weeks we have tried to take stock of the situation precisely on Steam Deck, although it is a machine still perfectly capable of playing AAA current gen titles locally.

The idea is to understand to what extent cloud gaming can now represent a real possibility for the medium, even and above all on the move, churning out both performance and visual quality, as well as a substantial improvement in the autonomy of the device, an indirect benefit but that could prove to be essential. Despite the absence of WiFi 6, Steam Deck still manages to reproduce streaming content correctly, with an input lag now practically canceled if the network requirements of the respective services are respected. In optimal network conditions it is possible to practically completely eliminate the compression artifacts, also thanks to the display of contained dimensions and resolution which manages to considerably mitigate the results of a possible reduction in bandwidth.

In particular, GeForce NOW has made great strides in stream optimization, scaling dynamically and immediately to be able to maintain the fluidity of the gameplay even in the event of a reduction in the quality of the connection, which can happen, for example, moving away from the signal source.

Unfortunately, to have the highest quality of service the price is not absolutely low, while Microsoft offers a very convenient package to its users, including its Cloud Gaming service within the Game Pass, thus combining the convenience of game streaming also the convenience of the securities park included in the price. The difference lies in performance and quality: with the maximum tier of NVIDIA you currently have access to the performance of an RTX 3080 and soon you will switch to that of an RTX 4080 complete with DLSS3 and NVIDIA Reflex, while here the maximum can bet is the computing power of an Xbox Series X, however far superior to what is offered locally by Steam Deck. This service also works very well and if you are already a subscriber, as well as owners of the handheld console from Valve, we can only recommend the guide to install Xbox Cloud Gaming on Steam Deck.

“But what is this game?” : 8 video games weirder than each other

What is the best video game ever? It’s battle between Zelda, GTA 4 and Super Mario