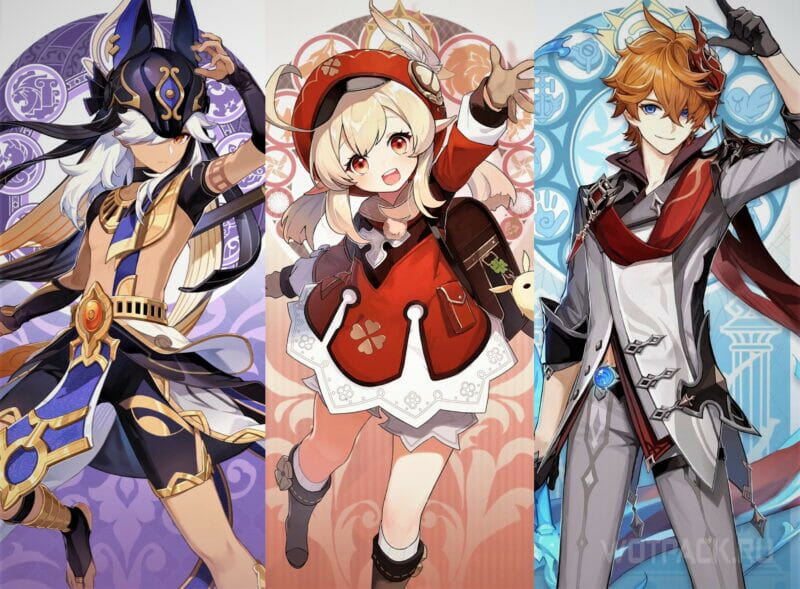 A post was posted on Reddit with the results of a survey in which they determined the top characters, which players regretted the most about knocking out. Statistics were made based on 824 responses.

The evaluation took into account certain categories introduced to explain the reason for the disappointment in the character. These criteria included: gameplay, skill/damage, remorse (e.g., knocking out characters under pressure from friends/advertising), random character acquisition caused by a sudden urge to spin a banner, team synergy, character obsolescence.

Next, we will analyze the top 5 characters that disappointed the players the most and try to find out why they got into this rating. 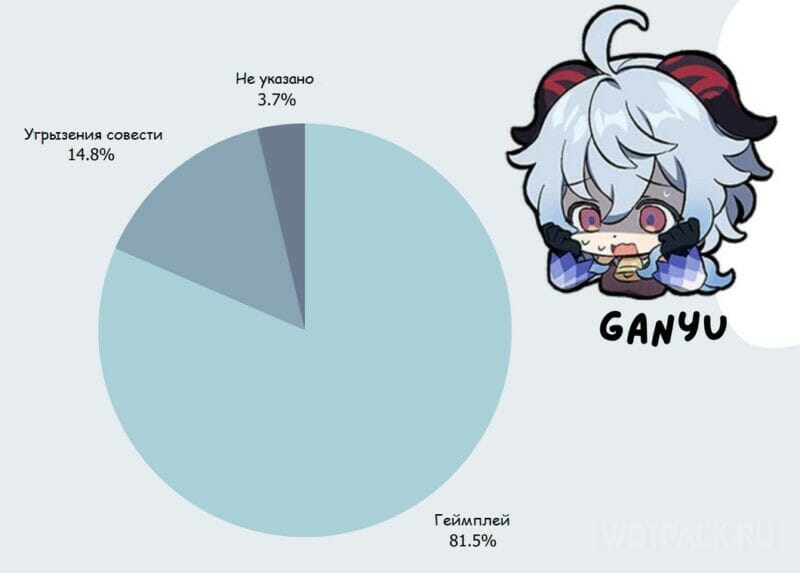 Fifth place is occupied by Gan Yu – the “goat”, loved by many players because of its huge damage and the Cryo element, which is the basis of the Melt and Freeze reactions. So why is she in this top?

81.5% of the players who participated in the survey did not like the gameplay of Gan Yu. This archer character plays with charged attacks, which can be inconvenient for a lot of gamers. This way of playing requires a good shielder on the team, as well as a healer if the shield is broken. Gan Yu’s shots charge slowly, and the elemental skill taunt does not work in all cases, which reduces the character’s mobility and defense. 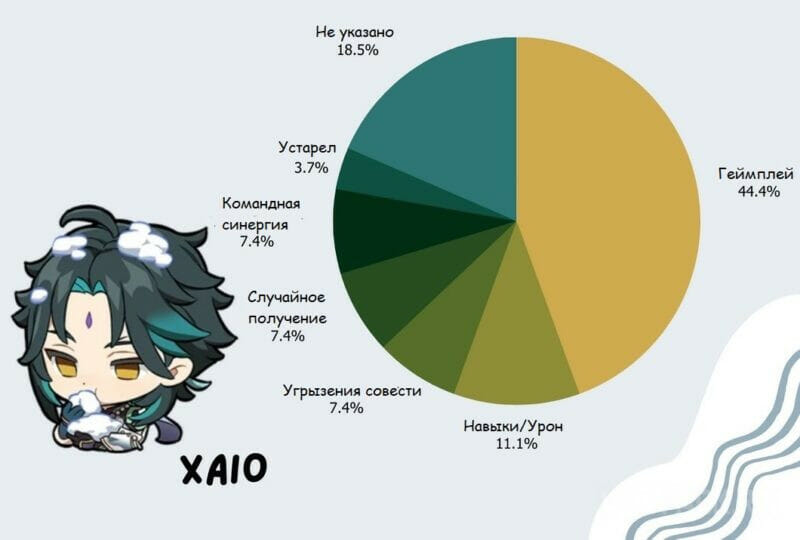 Xiao takes 4th place in the top. In the case of this character, the opinions of the players were divided between several evaluation criteria. 44.4% of players find Defender Jax’s gameplay uncomfortable. In some ways, they are right – in Xiao’s ult, he is forced to jump all the time (for which the style of play was nicknamed “monkey gameplay”), because of which he strives to accidentally get into the enemy’s AOE damage zone. At the same time, his HP is constantly decreasing, due to which he becomes more vulnerable and requires a shield / healer in the team. In addition, Xiao’s jumps scatter small opponents, which sometimes affects convenience or, for example, the time it takes to pass through the Abyss.

11.1% of the players found the Adept’s skills and damage to be below the expected level, and 7.4% found it difficult to assemble Xiao’s team. Before the release of Faruzan, there were almost no suitable supports for Anemo DD, except for the universal Bennet, who in most cases was employed in another squad. Perhaps with the release of Faruzan, the opinion of the players about the damage and convenience of Xiao may change + a new interesting set of artifacts Cinnabar Beyond was brought for him. 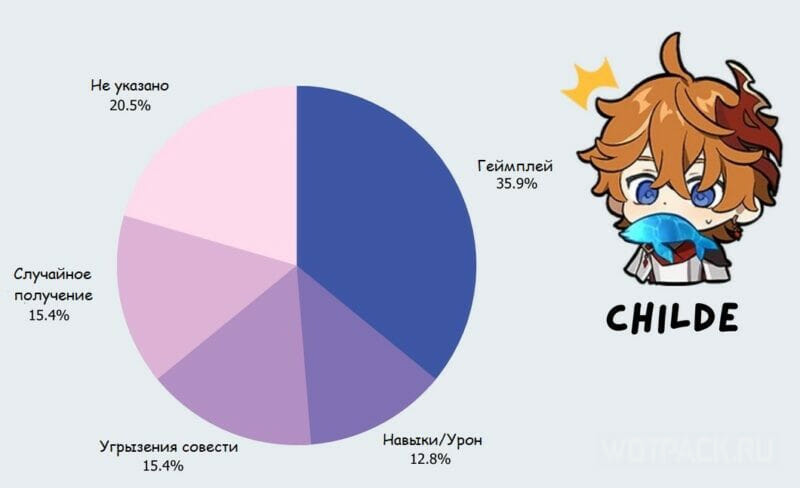 The red-haired Harbinger of Fatui fell in love with many during the passage of the plot, not only for its history, but also for its appearance. Also, Tartaglia, in skillful hands and with good pumping, is capable of inflicting tremendous damage. All these factors may well have affected the fact that the players wanted to get Childe into their collection, but, in the end, they regretted their decision.

No matter how convenient Tartaglia’s gameplay is, you have to pay something for the huge damage from the ult and fast attacks from the hand. This “fee” turned out to be a long rollback of the stance change, which can last up to 45 seconds. If a player does not know how to manage Childe and keep track of timings, then such a rollback will only interfere with a comfortable game. Its gameplay is considered uncomfortable by 35.9% of respondents. 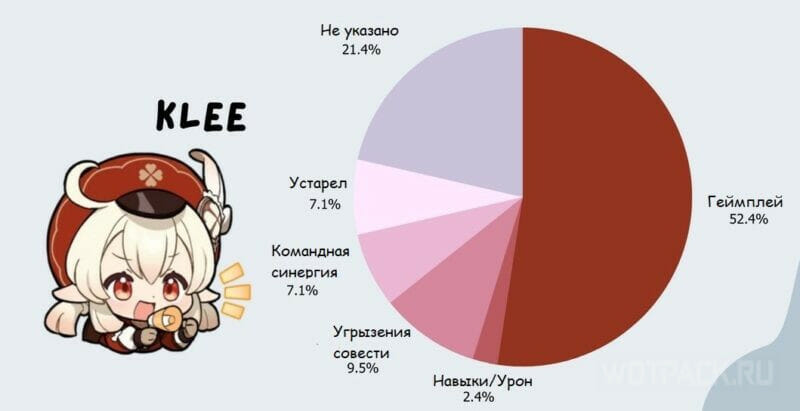 The chief explosion expert from Mondstadt, Klee, is ranked 2nd. She is the second character to be released in the game after Venti and the standard Legendaries. 7.1% of players think that Klee has been outdated since its release – its mechanics are quite ordinary, there is nothing complicated or eye-catching about them.

52.4% of players don’t like the gameplay of little Pyro Elf. Klee is a catalyst who plays at medium to close range through normal and charged attacks. Her energy ends quickly enough, which causes loss of maneuverability and the ability to dodge. Ulta Klee does a lot of damage, but when you switch to other characters, it disappears, which is also not always convenient. 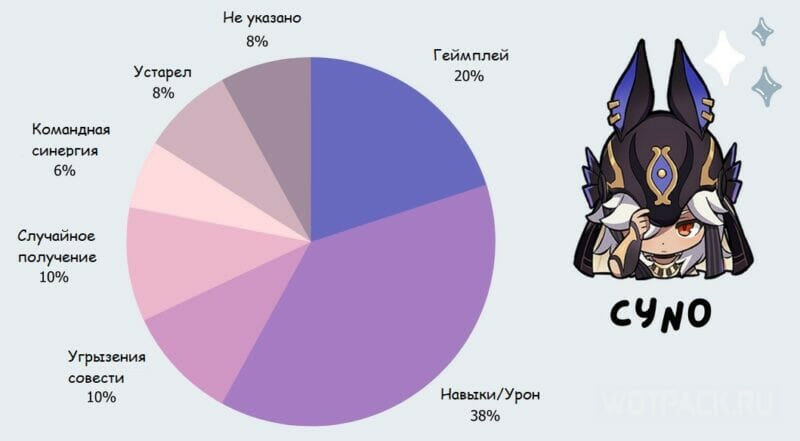 Saino is a character that was released quite recently, but he is in 1st place among the heroes that did not live up to the expectations of the players. General Mahamatra has been known since the first official trailer of the game, so there are probably players who knocked him out because of the model or story they liked, and subsequently became disillusioned with his gameplay. 20% of the players voted for this category, and another 38% voted for the character’s skills and damage.

Indeed, Sayno deals almost no damage from his hand or skills, and is forced to stay in his ult for a long time, which lasts longer than the abilities of most supports. During the action of the skill, you can’t be distracted, because if you press the “yeshka” in time, the damage will be higher, and the elemental explosion itself is quite expensive in terms of energy. In addition, General Mahamatra is demanding on supports, because he deals much more damage in conjunction with Dendro characters, which narrows the variability of the team. The assembly of weapons/artifacts is also very expensive – it is important for him to balance many stats at once, and not focus on one crit.

You can see the full list in the image below: 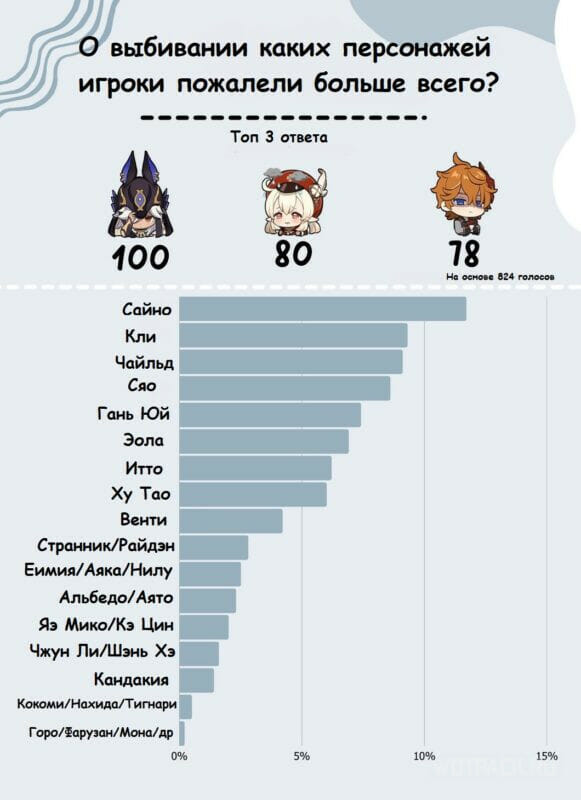 Share in comments your opinion about the characters in this top, as well as which character disappointed you and why. In a special section on the site you can read more interesting articles.

Pokljuka. Ukraine became the seventh in the single-mix

What's new on Netflix in January 2023? Highlights of the series and films

Deals with Gold: These Xbox offers will end shortly CW01/2023

The Witcher 3: Mod brings DLSS update to the next-gen version

“Demons and Angels”: the players voiced the most popular ideas for the continuation of God of War: Ragnarok