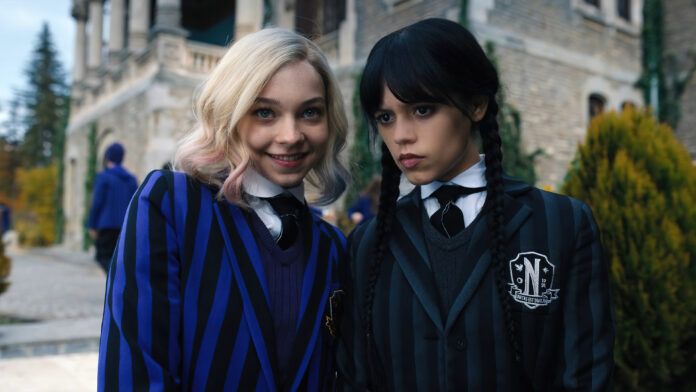 The announcement that Netflix would produce the second season of Wednesday dates back to a few days ago. The Hollywood Reporter warned us of the renewal with an exclusive article. A few hours after that notice, however, a movie has also arrived published by the official channels of Netflix itself. Wednesday (Jenna Ortega), protagonist of the series directed by Tim Burton and which also sees in the cast Emma Myers (Enid Sinclair), Catherine Zeta-Jones (Morticia) and Luis Guzmàn (Gomez), she breaks the fourth wall, becomes aware of herself and the memes that have begun to circulate on Instagram and Tik Tok and uses them to thank us and say ‘goodbye’.

The video, available below, sums it all up better than I could with paragraphs and paragraphs of words. Curiosity that I would like to mention: Bloody Mary was chosen as the soundtrack for the announcement teaser (versione speeded up) on Lady Gaga. The one that depopulated on the net to accompany the famous clip of the dance of the fourth episode, so to speak. Lots of memes, ballets, imitations and parodies spread on social networks with the 2011 song. Gaga’s song is an addition made by the people of the web. The complete soundtrack of the series does not feature that song. In fact, in the original, Wednesday dances to the tune of Goo Goo Muck by The Crampsthe choreography was totally improvised by Ortega.

Still another curiosity, to tell the success that the series has had since shortly before its debut, some images taken from the real world have been chosen. In particular, the greeting of Tim Burton (director of the series and guest of honor of the event) at the crowded square of Lucca Comics and Games in October 2022. Still from the same event, some frames of the first preview screening were taken, right from the Tuscan capital.

As we know, not everyone seems enthusiastic about this content. Many, to tell the truth, are a little annoyed especially after the announced interruption of 1899. The series created by the creators of Dark stops at the first season when in the original plans it was expected to continue at least until the third.

Pokémon TCG, the Scarlet and Violet expansion has a release date and many new features