A classic as a curiosity at the CES is about the smart toilet. Except that the whole toilet no longer has to be smart here, only the toilet block that is hung in the bowl and analyzes the liquid excretions. Withings introduced the U-Scan – yes, U stands for urine. It’s a device shaped like a hockey puck that sits in the toilet bowl and analyzes urine and sends the results to a smartphone app via Bluetooth. The beam flows over the U-Scan, into a small hole in the device; a tiny pump then pushes a sample into the test chamber, where a cartridge looks at what’s in the urine. Why do you want to know that? For example, to track the menstrual cycle, to monitor more general health information such as fluid balance or vitamin C levels – or simply to conduct studies as a researcher. 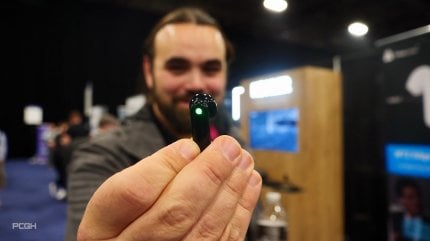 Less spectacular, but still cool, simply because it reminded us of the universal translator from Star Trek, are the Timekettle earbuds. The Chinese want to enable real-time translation in a direct conversation. Of course, it doesn’t work quite as smoothly as in Star Trek. The earbuds still have a few seconds of delay in the ear, so they are not yet a simultaneous interpreter, but apart from this bumpiness they work quite reliably. 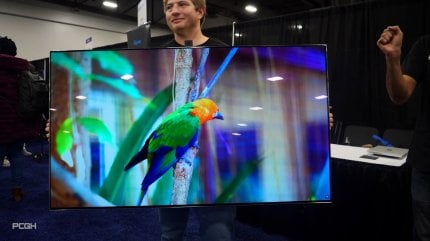 The exact opposite, so really cool, but actually not really useful, is the first wireless television, Displace. How does that work without a cable? Quite simply with batteries that last up to six hours and a processor box that streams the image onto the OLED panel. But what’s more: the display is light enough to be carried by one person, can be easily glued to a glass pane and, thanks to a webcam, can be controlled by gestures. Is that cool? Definitive. Do you need that? Definitely not. Especially not as a simple gas bill payer, since such a display costs around 3,000 US dollars. 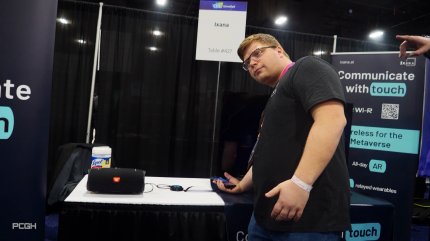 In Corona times everything should be contactless, that’s understood. But those days are almost over. “Hold my beer,” replies the Ixana company and develops Wi-R (however you pronounce it). This is a kind of Bluetooth that works by touch. Who needs range anyway? Okay, a bit more serious again: Why would you want that when Bluetooth already exists? The killer feature here is power efficiency. The touch connection is said to be up to a hundred times more economical for the devices than Bluetooth or WLAN. This saves the battery of wearables of all kinds, such as smartwatches or earbuds. 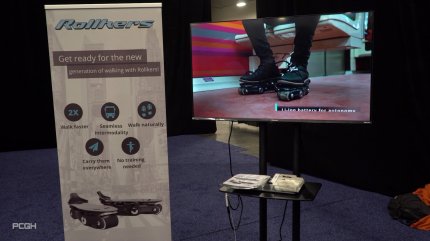 Also, the 80’s called and they want their roller skates back, please. The French “Rollkers” are electric roller skates. With the thick shoe sole you should be able to run twice as fast, but only four kilometers before the battery dies. It could also take some effort to dare to go public with it. 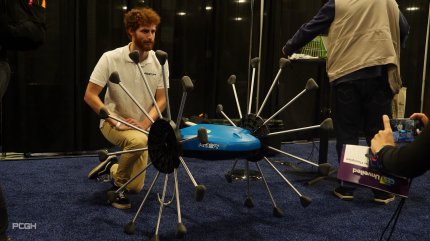 Of course we stop with such a strange device. This rolling robot called Sentiv from the French Forma Meropy fits into the category “looks spectacular, but it’s not”. Because it’s just a rolling camera that reports to the farmer’s cell phone whether a field plant has had a lice on its leaf. Certainly useful for agriculture, but nothing for the home garden. 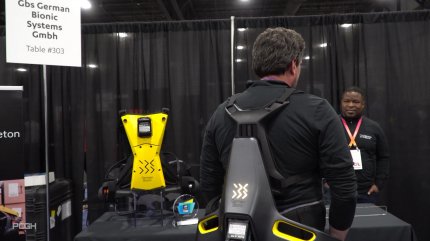 We still have one: exoskeletons are not really new and also far from the Ironman suit, but they do look interesting. Unfortunately we were not allowed to wear one ourselves, although we would have really liked to try one out. The company German Bionic from Augsburg develops and manufactures these lifting aids, which are to be used in logistics, for example. Lower back supports lifting up to 30kg.

Shortly before Christmas, Amazon delivered packages via drone within 60 minutes of receiving the order. How does delivery via Prime Air work?

PCGH Plus: PCI Express 5.0 is just around the corner, but many gaming PCs are still building on 3.0. What happens when a current PCI-E 4.0 GPU is connected to 3.0?

How did you find our trip away from CPU, GPU and AMD, Intel, Nvidia? Are you interested in more such curious trade fair gadgets? What topics would you like from the electronics trade fair CES? Let us know because there are still a few events ahead of us. You are welcome to comment on the curious technology in the forum.

Sponsored: Test and Win: The ultimate headset for those who want to communicate effectively

Public transport: towards a single ticket to travel everywhere in France

Joe Danger, the debut project from the authors of No Man's Sky, is free to play in your browser

Hogwarts Legacy: the universe of Harry Potter would be turned upside down by this major event