Game Pass: Unveiled three excellent games coming to the service in the second half of January 2023

Microsoft announced three games coming up Game Passboth Xbox and PC, in the second half of January. These are Monster Hunter Rise, Persona 3 Portable and Persona 4 Golden, all from Japan. It must be said that they had already been known for months, but it’s always nice to see them repeated.

Apparently the efforts of the Redmond house are multiplying to offer ever more varied contents, which make its subscription service attractive to audiences of all geographical origins. 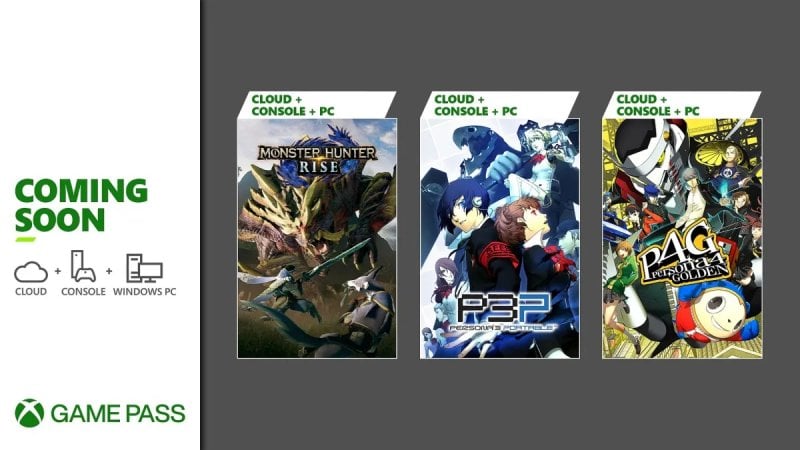 The three games coming in the second half of January 2023

Persona 3 Portable (Cloud, Console and PC) – January 19, 2023
Shortly after transferring to Gekkoukan High School, the protagonist comes across the “Dark Hour”. An unusual calm envelops the city, people transform into creepy coffins and supernatural monsters called Shadows swarm everywhere. When he is attacked by one of these Shadows and all hope seems lost, the power of the heart, his Person, awakens. Armed with his newfound power, he searches for the truth about the Dark Hour and faces the fate that awaits him. Persona 4 Golden (Cloud, Console and PC) – January 19, 2023
Inaba – a quiet town in rural Japan is the scene of the blossoming of adolescence in Persona 4 Golden. A growth story in which the protagonist and his friends will have to go on a journey following a chain of serial murders. Discover soul mates, feelings of belonging and face the darkest sides of the human soul. Monster Hunter Rise (Cloud, Console & PC) – January 20, 2023
In Monster Hunter Rise, the latest installment in the best-selling and award-winning Monster Hunter series, you will become hunters, explore brand new maps and use a variety of weapons to take down fearsome monsters in an all-new storyline. The PC version also includes a number of further performance improvements and graphical optimizations.

On January 15, 2023 they will leave the service the following titles:

2 smartwatches at an unmissable price below 90 euros

The Bible is coming to Steam, the developers promise achievements and localizations