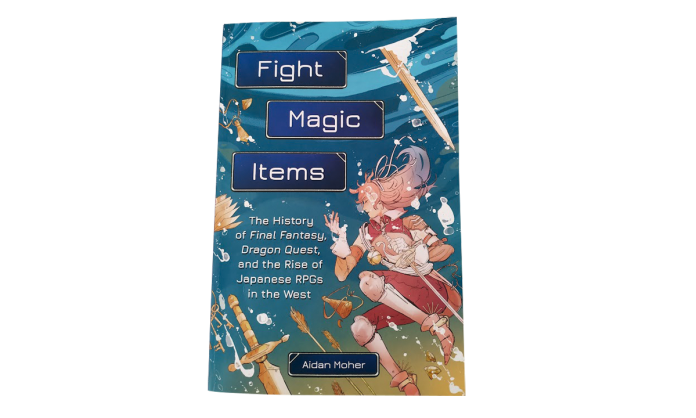 MERING • After the powerful work “A Guide to Japanese Role Playing Games” is with Fight! Magic! Items a new, English-language work on the subject of J-RPGs has appeared. Compared to the encyclopaedic work directed by Kurt Kalata, the book by the Hugo Award-winning US journalist and fantasy author Aidan Moher is more historical and traces the history of Japanese role-playing games chronologically.

A special focus is on their reception in the USA. In particular Dragon Quest and Final Fantasy Of course, they play prominent roles, but so do series like Phantasy Star, Mother/Earthbound and Shin Megami Tensei come into their own. One notices the experience of the author in the work: Moher quickly and effortlessly takes the reader on a great role-playing journey through time and also explains complex relationships in a plausible and comprehensible manner. For inveterate connoisseurs, some topics may have been dealt with a little too succinctly and a few blurring of the content have also crept into the book. But there is still a big recommendation: It doesn’t matter whether you’ve been thrashing slimes and riding chocobos since the 1980s, or whether you’re just starting out Persona 5 have discovered the world of Japanese RPGs for you or have had no contact with this special type of role-playing game – for just under 20 euros you can broaden your gaming horizons here in a very entertaining way.

Netflix: Program for late January & early February 2023 – with these series and films

Nintendo has dominated sales in Japan for 18 years

This is the room in the house where it spends the most light!

The Epic Games Store is giving away Mortal Shell